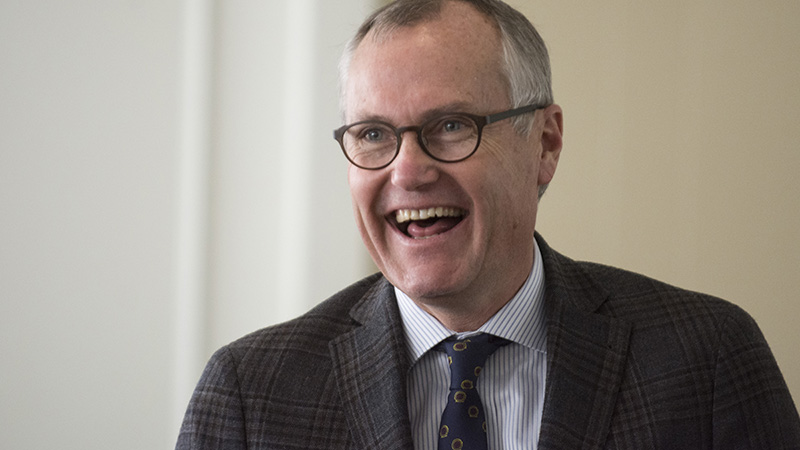 Lt. Gov. Casey Cagle made his way around LaGrange on Friday morning, starting with a ceremony at THINC College and Career Academy and then a meeting with community leaders at Highland Country Club.

Cagle is hoping to emerge from a crowded field of candidates to be Georgia’s next governor and tried to make his case with voters Friday.

Inbetween his appointments in LaGrange, Cagle took time* with the Daily News for an exclusive interview. During that interview, he was asked about the future of education in Georgia, the growth of LaGrange and a law passed in September that allows brewers to sell beer straight to consumers.

During his time as lieutenant governor, Cagle has played a significant role in the opening of college and career academies across the state of Georgia. THINC College and Career is one of more than 40 around the state. He said he could not be happier with how the career academies, including THINC, are helping Georgia’s youth get ready for the career of their choosing.

“I could not be more pleased. The issue is, we don’t have enough of them yet,” Cagle said. “One of the main reasons I’m running for governor is so we can expand that across the state, so education is aligned with industry needs, and so we are doing two things. We are giving the pipeline of workers that industry needs, but we’re also giving students the ability to make forty and fifty and sixty thousand dollars a year right out of high school.”

He described THINC as “a world class facility,” and discussed his hopes of expanding academies like it to include more grades.

“Look at the national rankings and look at what they do on a national scale of competing with these kids,” Cagle said. “This is world class, so I’m excited about where they are. The next challenge is to also begin incorporating more of this at the third and fourth grade levels and getting them exposure to robotics and some of the technology aspects. That’ll begin to enlighten the students and show relevance in what they are learning as well.”

He said THINC Academy is one of the main reasons industries are so excited to come to LaGrange. With all of the new industry and businesses coming to LaGrange — such as Sentury Tire, the expansion of Duracell and the opening of Great Wolf Lodge — local leaders expect there to be an abundance of new jobs created in the next few years. The key is finding qualified workers to fill those new positions. Cagle said THINC is helping creating all of those new jobs.

“[Those businesses] see a pipeline of workers they can partner with,” Cagle said. “Their success is dependent on them being able to do the work for them to penetrate the marketplace. The issue is us expanding and getting more and more of our students involved.”

He believes another solution to fill those new positions is an adult option for retraining, so that more people looking for work can get qualified.

“We are doing it with Quick Start right now, but I will have a new program that will be looking at ways we can do more for the adult retraining pool,” Cagle said.

The lieutenant governor also touched on the brewery law passed in September, which allowed craft breweries, like Wild Leap Brew Co. in LaGrange, to sell beer directly to consumers.

Several of his opponents have said Cagle was an opponent of the bill and has flip-flopped on the issue.

“I was instrumental in bringing the two sides together,” Cagle said.  “With a brewery, Anheuser Busch or Miller doesn’t have the ability to go direct to consumer in Georgia, so what we have done is we have brokered a deal that basically allowed a major, large consumption cap in which it has been transformational for breweries in our state. They are going to be very successful going forward.”