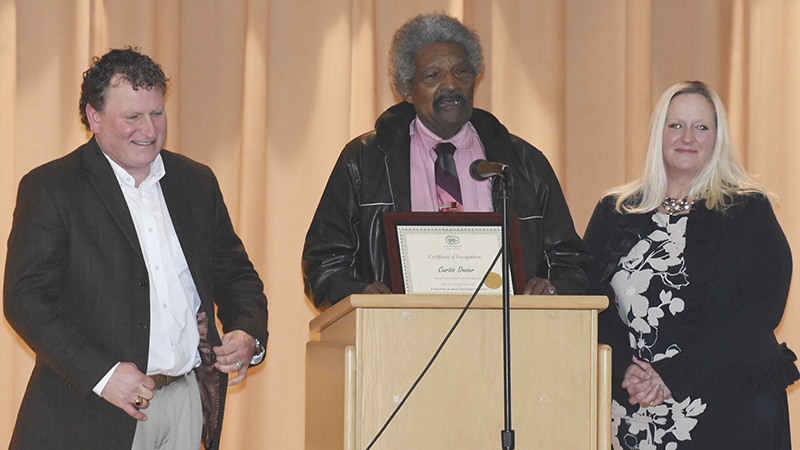 Curtis Dozier speaks after he is given a special recognition award. (Daniel Evans | LaGrange Daily News)

The city of Hogansville celebrated the life of civil rights icon Martin Luther King Jr. on Sunday at Hogansville Elementary School by thanking those in the community for their own life of giving back.

Hogansville honored the late Rev. Bradell Allison-Martin with a posthumous lifetime achievement award. Martin was a local civil rights activist and organizer, who passed away in 2017 at the age of 75. Martin was one of the first female African American Methodist ministers in the North Georgia district.

Dr. Tony Lowe presented the award to the Martin family. During his speech, he referenced a column he wrote last year, which detailed Martin’s life and called her a hidden figure for all the behind the scenes work she did in the fight for voting rights.

“She was a hidden figure because of her role in helping organize the West End Voters League, the West Point Voters League and the LaGrange Voters League,” Lowe said. “These were all nonpartisan political action organizations that pushed for more inclusive involvement in city leaders.”

Reginald Jackson Jr. was honored for his work with children through the Future Shepherds program, which aims to connect positive role models with young people that need them. Jackson played basketball in Europe for several years, but started the program after returning to Hogansville and realizing many young people were growing up without two parents to guide them.

“Mr. Jackson and the volunteers [help the students] develop basketball skills, provide tutoring and homework assistance and exposure to activities that are challenging and prepares them to live, learn and work in a diverse society,” said councilwoman Theresa Strickland, who organized the MLK program along with councilman George Bailey.

Curtis Dozier was also recognized for the positive spirit he brings to the Hogansville community.

The keynote speaker was the Rev. Jimmy Gibson, pastor of Mt. Olive Baptist Church in Atlanta.

“I won’t stand here long, but I’ll stand here as long as I need to to put a plug in for a man that stood for justice and freedom for everybody, not just black folk but white folk and all people,” Gibson said.

Mayor Bill Stankiewicz wants to formalize turning the Martin Luther King holiday into a day of service in the city of Hogansville. He believes that’s the best way to honor the civil rights icon, who died 50 years ago this year.

“For some time now, I’ve believed this holiday should be more than just a day off, or another excuse for a sale at a department store. I believe it should be a day of service,” Stankiewicz said. “Dr. King’s life was a life of service. A service to his community, mankind and to God. Therefore, I charge each of us to go forward from today and determine how best we can serve others.”