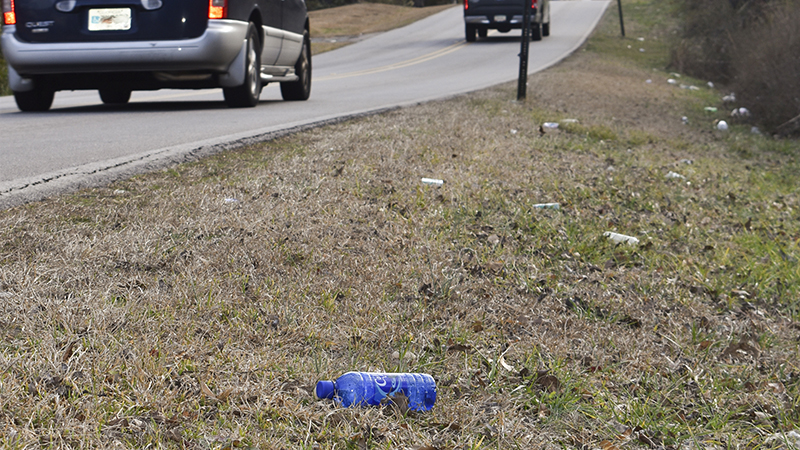 The Troup County Board of Commissioners is reportedly working with the city of LaGrange and law enforcement to determine how to deal with roadside litter. Shown above is litter on Hammett Road. --Alicia B. Hill

On Tuesday, a citizen came before the Troup County Board of Commissioners to ask what is being done about litter along Troup County roads.

Roadside litter has been a topic of heated conversation recently, with citizens calling, writing letters and stopping county officials in public to ask for a solution.

“I don’t know what we can do, but people here just don’t have a sense of cleanliness,” said Connie Stothard, a citizen at the meeting. “I think that we need to get back to this. Let’s make Troup County clean again. It was just disgraceful. It looked like a garbage truck had gone down and just kept throwing down bags of garbage. I was just appalled.”

The good news is that county officials report that a plan is currently in the works and will soon be put into place. The bad news is that that solution will require a lot of time and work before results are readily visible.

“Last week there was a group of about 15 individuals from the city, the county, law enforcement, leadership — we came together and had a meeting to talk about this issue, and we have some plans that we are developing,” County Commission Chairman Patrick Crews said. “We hope that in about two to three weeks roughly, we’ll announce that and talk about it, and we will hit it from many different angles. What can we do from law enforcement? What do we do about fines? What do we do about teaching citizens that we want a cleaner community? We’ve got to instill pride in our own citizens.”

Crews and Commissioners Morris Jones and Lewis Davis all emphasized that it will only be possible to clean up the county when all the groups involved work together.

“I hear from citizens all the time about this, and what people have to remember is that we as a county, we are responsible for our citizens,” Davis said. “One of our problems when we try to address this issue is there are state highways, there are city streets. We as a county — we can’t oversee what goes on on state highways and on city streets. We have to work as a unit.”

Officials won’t be the only ones expected to step up to clean up the county’s litter problem. Crews said he hopes citizens will take personal responsibility for local litter.

“I’m one of those that believes we must attack this problem at the root cause which are people, our citizens, our own citizens that are throwing trash,” Crews said. “Either by accident or on purpose they are letting trash get alongside our road.”

The commissioners have reported hearing numerous concerns on roadside litter from citizens since the closure of the correctional institute at the end of June. That closure dramatically decreased the number of inmates cleaning up roadside litter, but the commission pointed out that there are still inmates picking up litter regularly.

“I’d like to assure everyone that we did not do away with all of our prisoners picking up trash,” Crews said. “Some people believe that we have done away with all of them, and that’s not true. The county still has prisoners that are out picking up trash. The city has community service workers that pick up trash. … And the state has prisoners, and they are supposed to pick up along the state highway.”

However, freezing and near freezing temperatures in the last few weeks have limited how often those prisoners have been able to clean up roadside litter.

“Unfortunately, due to a lot of the extreme cold weather that we’ve had the last several weeks, there are some laws that prevent the prisoners from getting out during those extreme cold temperatures,” Crews said.

“We had probably two to three weeks that the prisoners were not able to get out on a regular basis. The truth of it is that people continue to litter during those periods of time. I think it brought to everybody’s eyes what a problem we’ve got, and the fact that we pick it up kind of eliminates some of the pain of seeing all that litter, but just look what happened over a three-week period when we weren’t out picking up trash.”

The idea of hiring a contractor to pick up litter more often was also brought up during the meeting, but Crews said that he was opposed to the idea due to the cost to tax payers.

“Trash is a very complicated issue,” Crews said. “We could spend lots of tax dollars going up and down the road once a week picking up trash, but as y’all all know, you can pick up the trash and 30 minutes later it is right there along the road from somebody (again). It is a constant problem.”

It was also noted that litter has been a problem in the county for far longer than the correctional institute has been closed.

“I remember from years past, a previous commissioner sitting right here, and saying that we have some of the nastiest roads in the state of Georgia, and it was an embarrassment,” Davis said. “This has been an ongoing problem. This did not begin starting at the end of last year. This is an ongoing problem that we have, and we are really going to have to work hard to address this and try to make it better.”

It was also noted that a change of attitude may be needed in order for everyone to see real lasting changes in the county.

“This commission has been working and addressing litter since day one that I’ve been sitting in this seat, and up on Hillcrest Road — where the chairman just said (he saw someone litter) — the sheriff had his crew picking up trash,” Commissioner Morris Jones said.

=“Forty-five minutes later, I came back down the same road where they were picking up, and there was already litter like it never had been picked up. I don’t know whether individuals see that the inmates are out there picking up the litter, and then they say, ‘well, we are just going to throw some more out for them to pick up’ or how it is all operating in their mind.”

The commissioners have heard a variety of other suggestions on how to catch litter bugs, but the problem is finding a practical way to catch them in the act.

“We’ve got a thousand miles of roads in the county,” Senior Building Official Jay Anderson said.

“We cannot put out a thousand cameras (to catch people littering).”

According to Sgt. Stewart Smith of the Troup County Sheriff’s Office, if you witness litter coming from a vehicle, you should write down their tag number and report the person to 911.

General complaints about litter should be directed through the Troup County Marshal’s Office at (706) 883-1627 or code enforcement. In Georgia, anyone caught littering can be charged with a misdemeanor and, if found guilty, can be punished by a fine of not less than $100 and not more than $1,000, according to the Official Code of Georgia.

The Troup County Board of Commissioners is scheduled to meet again on Feb. 20 at 9 a.m. at 100 Ridley Ave.