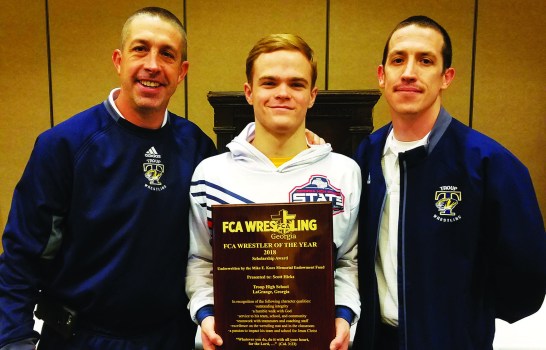 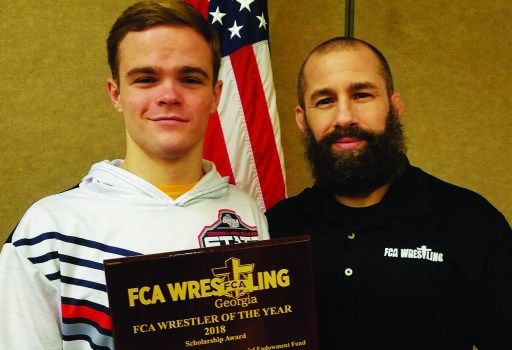 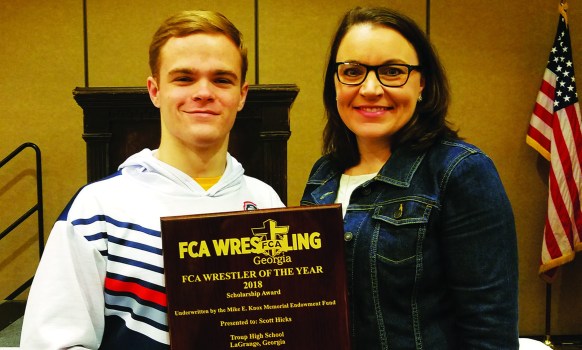 Troup High’s Scott Hicks has made a massive impact at the school, not just as one of the state’s best wrestlers, but as an exceptional all-around student.

On Saturday, Hicks’ excellence as a student-athlete was recognized when he was named the Fellowship of Christian Athletes wrestler of the year.

Since 2013, the award has been given to one individual each year in the state of Georgia, and that includes wrestlers from all seven classifications.

This year’s winner was announced during a banquet on Saturday, the final day of competition at the state wrestling finals in Macon.

According to Troup head coach Craig Garner, it was a unanimous decision, with each of the members of the panel agreeing that Hicks was the most deserving recipient.

“Out of all the nominations, it was unanimous, and wasn’t even second-guessed,” Hicks said.

While Garner knew before-hand, it came as a surprise to Hicks, as well as his parents Greg and Amy, who were in attendance along with other members of the Troup team.

“We were as surprised as anybody,” Greg Hicks said. “Amy and I knew nothing, which we were fine with. It’s the kind of thing that makes you want to cry a little bit, and we had a couple of tears. Wow, that was phenomenal. We’re blessed with him.”

Scott Hicks’ high-school wrestling career came to a close on Saturday when he finished third in 152-pound weight class in Class AAAA.

Hicks’ hopes of winning a state championship ended when he lost to Blake Beasley of West Laurens in the second round, and that was a major blow to someone who believed he had a great chance to win it all.

Hicks, who also finished third at the 2017 state finals, shrugged off that disappointment and re-adjusted his mindset.

If he wasn’t going to win, he was going to finish as high as he could, which was third.

“Being a senior, after that (loss), it was a wave of depression,” Hicks said. “I was so mad at myself for losing, and just the world, and everything. But then I thought about and said you can still finish the exact same place you did last year.”

After winning three in a row, Hicks found himself facing Beasley in the third-place match.

“I went into that third-place match against the guy that put me out in the beginning,” Hicks said. “So it was kind of a grudge match. I had a chip on my shoulder and I was ready to wrestle. It came down to who wanted it more, and I wanted it a lot more than he did.”

“He’s very smart, very intelligent, but at the same time he’s a sponge,” Garner said. “Even though you can tell how intelligent he is, he’s able to soak things up and go out and apply it quicker than most.”

Garner added that he’s “one of those experienced kids that can listen, and see it, and hear it and put it to work with his body. He’s able to master physical skills.”

As important as wrestling is to Hicks, it’s just a part of his school life.

Hicks spent most of last week in Washington, D.C. for a national SkillsUSA conference, but he didn’t let that get in the way of his training.

“Every night after we got done with our meetings in D.C., I would go run, and bike,” Hicks said. “There was one night where I biked 8.5 miles and biked 3.5. It was a big deal trying to keep my endurance up.”

When Hicks got back home on Wednesday, he hustled to the wrestling room for the conclusion of that day’s practice.

“He jumped in there and worked like a savage for the last hour,” Hicks said.

The next morning, Hicks and 10 of his teammates headed to Macon for the state finals.

“I left direction after sectionals, and flew into Washington, D.C.,” Hicks said. “I didn’t get back until Wednesday evening. I had about 30 minutes of practice, and then I woke up Thursday morning ready to wrestle. It was a long week.”

Among Troup’s 11 wrestlers in the finals were six seniors, including Hicks, who helped lead the Troup wrestling program back to state prominence.

Seals and Butts both finished second at state, Hicks and Upchurch were third, and Kersey and Robinson won matches but didn’t place.

Being a successful high-school wrestler isn’t an easy life, but Hicks has no regrets.

“It was a fun, exhausting four years,” Hicks said. “There were a lot of lessons learned, a lot of late nights and early mornings. And it was all worth it.”