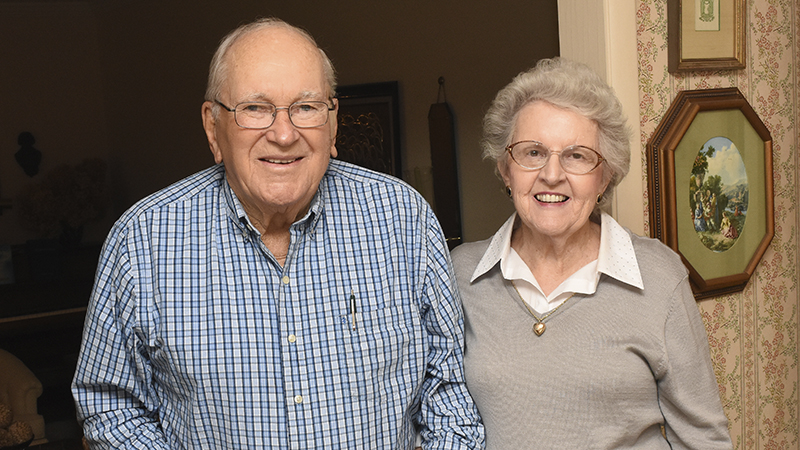 It’s been about 75 years since Will Oubre served in World War II as a teenager. Like many others, he enlisted in the U.S. Navy Air Corps at age 17 because he didn’t want to get drafted into the U.S. Army.

He’s got books full of photos, and he can rattle off the name of the men who served on his crew like he just saw them yesterday. Unfortunately, at age 92, he’s the last living member from the squadron he served in.

“Everybody else has died and has went on to be with the Lord I pray,” Oubre said. “I was the youngest, and now I’m the only one.”

Their memories live on, especially in the photos he’s got tucked away in albums. At 18, Oubre served as the plane captain of VD-3 Squadron, which took photos from the air during the war, and was stationed on Okinawa at Buckner Bay.

“I was in charge of the plane and the crew,” he said. “There were eight of us, two photographers, two radio men, two artillery men and two mechanics and I was the plane captain and first mechanic. If something happened to any of them while we were in combat, I had to take their place. If one of the got shot up in a turret, I had to get him out of there and see if I could get in.”

“I told them I have never even flown in this airplane,” Oubre said. “All I’ve done is work on one.”

Oubre was put in charge, and he was over people that were older than him. Two members of the crew were 36 and 37, and he respected them as elders.

“We were calling them the old men. They were old,” Oubre said. “When we first formed up the squadron, we started calling them mister because when we were coming up you called your elders Mr. and Mrs. And we said yes ma’am and no ma’am. I was in charge of them, and I caught myself saying yes sir and no sir. They teased me about it, but it was a habit.”

Oubre still has his flight book, which is handwritten and shows everything he did during the war. One day in particular stands out.

“A shell came through the back part of the plane. Andy was sitting on a portable camera where he could watch fighters and he was looking out each of these hatches here,” Oubre said while pointing a photo. “When I leaned over to turn that camera on, that shell came through there and blew both of his legs off and spun him around.”

Every member of the crew was wearing oxygen, but Andy’s was blown away.

Oubre gave Andy his oxygen, and they ended their mission and landed as quickly as possible.

Andy died a few days later. At first the crew was told he died of pneumonia, but Oubre said they were later informed it was because of a bad blood transfusion.

Before that time, Oubre said he and the flight crew — which consisted of all young men — were naive about their time in the war.

“We were scared. Don’t let anybody tell you we weren’t scared because we were scared. We just didn’t have enough sense to be scared until we got hit,” Oubre said.

“We enjoyed what we were doing. None of us complained and none of us fussed. We knew we could get blown out of the sky any minute but we weren’t afraid. After we got hit, we realized we could get killed, just like Andy.”

During that same week, atomic bombs were dropped on Hiroshima and Nagasaki in Japan.

Oubre’s crew flew over both cities to take photos before and after the bombs.

“A lot of it just disintegrated. That bomb was so powerful,” Oubre said. “We took the pictures of it before, and we took the pictures of it after. We didn’t know what was going on. All we knew was we were taking pictures. That was our job was to photograph it and we did. And they dropped the bombs off of our photographs. We’d take the pictures, come back in and develop them and send them right into the headquarters, so they’d know what to do with them.”

During the war, Oubre and his crew also dealt with a typhoon, which lasted multiple days. They spent all their time moving their planes around into the wind and it paid off. The planes survived the storm and could still fly.

“Out of thousands of planes they had on that island, we had the only eight planes that could fly,” Oubre said. “We stayed out there and turned them into the wind, and then they put us flying patrols 24 hours a day. We’d come in refuel and change crews.”

Even after the war officially ended in September, Oubre and the VD-3 Squadron were shot at by opposing troops who hadn’t received the news. He flew his final flight in October and was honorably dicharged from the U.S. Navy at age 21.

After that, he went to pilot school but didn’t love it. He ended up meeting his wife of 60 years, Jo, and moved to Georgia in 1958.

Will had served as her blind date during Mardi Gras in New Orleans, near where he had grown up, and they hit it off.

“She’s been blind ever since,” Oubre said with a laugh.

Together they opened up a service station, owned a farm and Will spent nearly two decades as a mail carrier. They said their relationship has been successful because of their devotion to their faith.

“We were both devoted to serving God, and when you have that love and then share that as what you do with your life, that makes all the difference in the world,” Jo said. “We’ve been very happy for 60 years.”