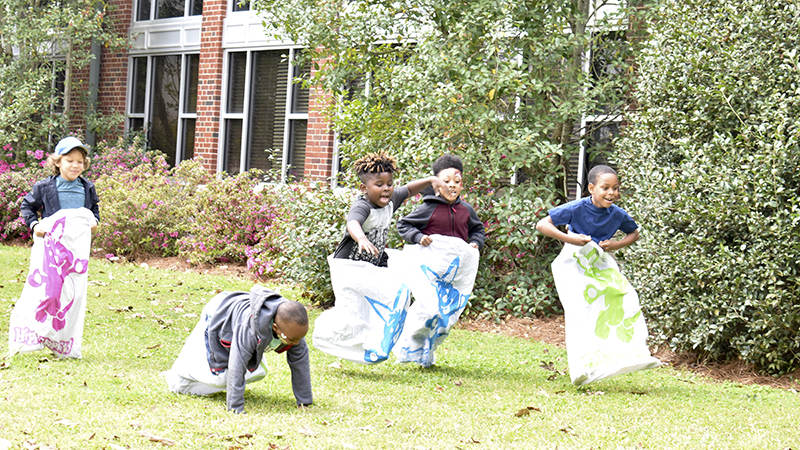 Local children skipped, hopped and ran to pick up eggs on Saturday at local egg hunts designed to bring the community together.

The Hogansville Police Department hosted an egg hunt at Hogansville Elementary School on Saturday morning. Approximately 123 children attended the hunt, and they picked up the more than 2,000 eggs that the HPD had placed in the school’s field in just over 2 minutes.

“It is getting bigger every year, and just being able to get kids to be able to come out and have a good time and people coming together — it is just fun,” Hogansville Police Chief Brian Harr said. “This is one of those things that builds a community stronger.”

This was the tenth year that the Hogansville Police Department has hosted the egg hunt for the community, and organizers said that it has grown every year. This year Love’s Travel Stop, Tucker Boys, Asian Mini Mart, the Hogansville City Council, Walmart and Ingles all made donations for the egg hunt.

“They are just so super for the city, for the kids especially,” Hogansville Mayor Bill Stankiewicz said. “It gives us a sense of community to get everybody together on a nice Saturday morning, and I am just so pleased that the police department does this every year.”

Stankiewicz said that he would like to see more community events like the egg hunt in the future.

A few hours later, families filled the parking lot behind the Coleman Center for an egg hunt hosted by the Hillside Community and Twin Cedars. The egg hunt was inspired by the Roving Listening Project which found that many residents wanted more community events.

“Our group threw something called a Roving Listening Project and found from a lot of neighbors that they wanted to have an annual egg hunt,” said Leah Watts, the co-director for the Roving Listening Project, in the Hillside community. “Last year we did it on the fields of South Lee, and this year we met Sherri [Cody of Twin Cedars]. They had done an egg hunt last year, and she asked if we wanted to partner.”

“It has been a great way just to get neighbors together and just get people to have a good time,” Stephen Watts, a Hillside resident who played a major role in organizing the event. “It is all about seeing people, meeting people, knowing people, being known and those types of things.”

For organizers, the event was all about providing a fun experience for local children while encouraging involvement.

“We are all about providing experiences for children because poverty is a lack of experiences,” said Sherri Cody, Twin Cedars executive director. “If between us all, we can offer these children an experience that they wouldn’t have been able to have had otherwise today that is positive for the child. Even bigger than that is the fact that there are people from all over this community here, and they are meeting each other, and they are learning about the resources that are here in conversations that are occurring all over.”

For information on upcoming egg hunts in the community, check the community calendar on page 3. To submit a calendar announcement for an egg hunt or another community event, email the details of the event to news@lagrangenews.com.