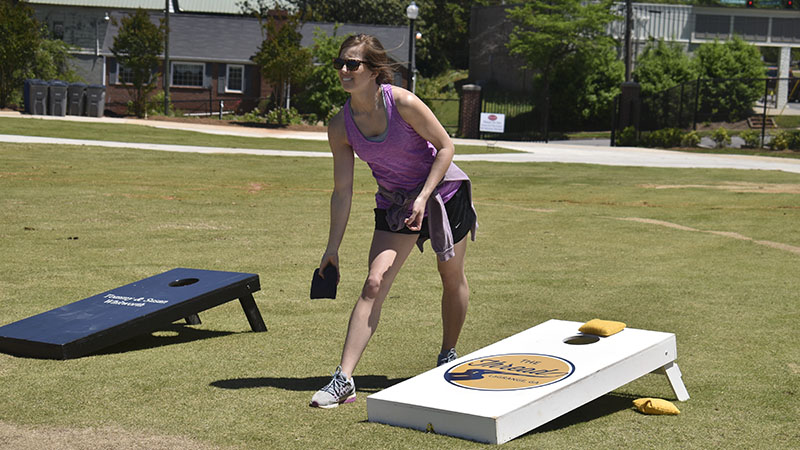 The fifth annual Cornhole Classic was a toss-up at Sweetland Amphitheatre Sunday afternoon.

Young Life LaGrange’s annual fundraiser had about 200 people compete on teams of two.

“There’s more teams than we ever had before, so we’re excited for it,” said Young Life LaGrange Area Director Allen Crawford. “We’re excited. We feel like this event’s grown in the five years that we’ve been doing it.”

“Kind of at the heart of it is young life leaders are building relationships with high school and middle school kids,” Crawford said. “They’re going to their games and plays and concerts and shows and walking alongside of them hoping to share Jesus with them.”

“We have elder people playing, and we have little kids playing,” Bradfield said. “It’s all ages.”

Young Life made more than $12,000, according to Bradfield.

Larry Waldrop said he played last year and wanted to continue to support a good cause.

“Anything I play, I play to win, but I’m having a good attitude about it at the same time,” Waldrop said. “Nothing wrong with losing too sometimes.”

Players got to make up team names for themselves. Amy Peek said she and her boyfriend Lynch Major named themselves I Love Lamp.

“I am friends with a lot of people who work for or with Young Life, and it’s just a great organization to support. And so I just wanted to show my support and come out have fun with some of my friends,” Peek said. “I play for fun but I’m not very good, but I enjoy playing and this a great way to see a lot of people in the community support a good organization.”