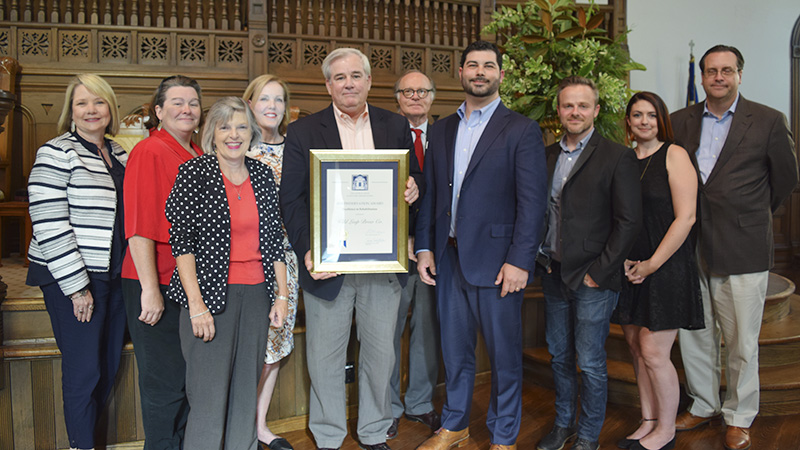 The Georgia Trust for Historic Preservation awarded Wild Leap Brew Co. for Excellence in Rehabilitation on Friday for its restoration of the building where the brewery is now located.

The award recognizes projects that “make compatible use of a building through repair, alterations or additions while preserving features of the property that convey its historic value.” The building was nominated by local historic author, Kaye Minchew.

“We are so excited to have received the award,” said Anthony Rodriguez, the co-founder of Wild Leap Brew Co. “There was a lot of hard work that went into it by a lot of different people, but it has been really exciting for us. We are just ecstatic.”

According to the Troup County Archives, construction began on the building in 1948.  At that time, it was the Huie-Dobbs Chevrolet dealership and car showroom. The building was later used by Westbrook Service & Tire Co.

According to the Georgia Trust for Historic Preservation, the Callaway Foundation purchased the building in 2008, and it was used on occasion by the Junior Service League. Wild Leap began rehabilitating the building in 2017, and it now serves as a local attraction and gathering point.

“We are so honored that Wild Leap Brew Co. was selected for Excellence in Rehabilitation by The Georgia Trust for Historic Preservation,” said Barbie Watts, the director of promotions and marketing for the Downtown LaGrange Development Authority. “It was one of the ‘youngest’ buildings to receive the award this year.”

Wild Leap’s founders had their hearts set on the building from early in the process.

“On my first trip to LaGrange to head into a meeting — and one of my first experiences with LaGrange — it was one of the buildings that I passed,” Rodriguez said. “I immediately said that would be just an amazing place for a brewery. Lucky for us, that is where we ended up. It was almost fate.”

“It means the world to our built environment and our local heritage to have new enterprises interested in preserving what was here before they came,” Troup County Historian Clark Johnson said. “We think it makes them very good community servants and stewards.”

Rodriguez admitted that renovating and rehabilitating the building cost more than it would have to build a new building, but he said it was worth it.

“It would have actually been an easier project if we had started from scratch, but it wouldn’t have had character,” Rodriguez said.

“It was worth all the struggle to have the character of the building, and we’re so happy that building has new life, and we’re even happier that we were able to bring it with the help of so many others.”

The renovations kept architectural features of the building, like the 7-foot-tall exposed steel trusses in the tap room, intact in order to honor the building’s original design.

“What a wonderful award for our community, I am very excited that my firm was a small part of the design, development team for Wild Leap,” said Gordon “Skip” Smith Jr., whose firm created the rehabilitation plan. “The building’s Art Moderne style of architecture is one of only three buildings of this style in LaGrange. This project also serves as an example of how rehabilitation of older structures can be viable aesthetically and economically, when developed with a public/private venture.”

The 41st annual Preservation Awards ceremony was held on April 27 in Columbus.  The trust presented 14 Excellence in Rehabilitation awards this year.