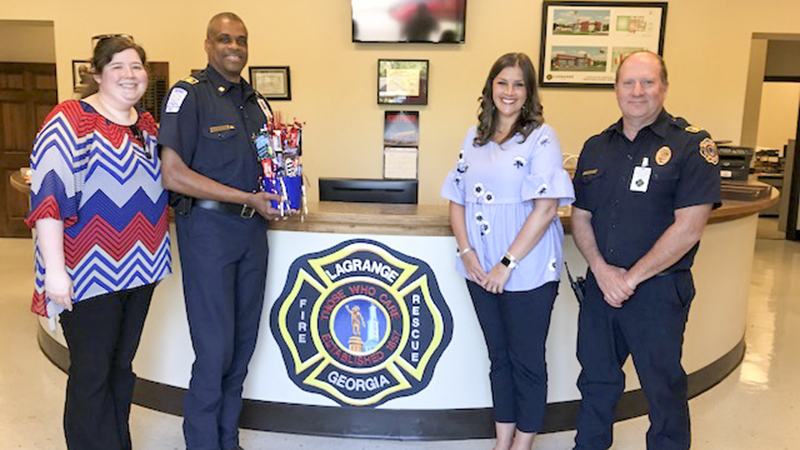 NOTE: This is the third story in a four part series featuring the grand marshals for the 2018 Sweet Land of Liberty parade.

Deputy Chief Willie Bradfield of LaGrange Fire Department had not previously met the Junior Service League members who visited LFD headquarters in April to announce his selection as a grand marshal of the 2018 Sweet Land of Liberty July 4 parade.

But once he got over the surprise, the veteran firefighter realized he and his League visitors share an important bond. They are all about volunteering.

Junior Service League members have been volunteering for community causes since the organization was established in 1973.  Even during the current “summer break,” League volunteers are working to stage the annual Sweet Land of Liberty parade, founded in 1985 by League member Annette Boyd and her husband Jim.

Bradfield also has been volunteering for good causes for decades.

As a young man, in fact, he discovered his career interest in fire fighting as a volunteer in his native Heard County.

“I was employed as a truck driver,” he recalled, “but in the evening, I would go to the fire station to volunteer and hang out.”

Bradfield discovered he really liked helping people and decided a career in fire fighting would be a good way to do that.

About the only thing he likes better than volunteering, it seems, is working. For almost 20 years, Bradfield has worked two jobs – climbing the ladder at both Heard and LaGrange fire departments. His promotion to deputy chief in LaGrange led him to give up leadership responsibilities in Heard County, but he still works there part-time.

“My parents were hard workers – my mother also worked two jobs most of her life. They instilled in me that if you want something, you have to work to get it,” he said.

LaGrange Police Chief Lou Dekmar, who also supervises the fire department, said there’s a reason he has promoted Bradfield multiple times in the past dozen years, from firefighter to sergeant to captain to deputy chief.

“It’s because of his leadership ability and his ability to embrace new ideas, especially community outreach,” Dekmar said.

Another place Bradfield gives much time is Stateline Baptist Church, where he is a deacon and wears many hats. Again, he follows the example of his parents.

“They always taught us to do right, to do your job as you are supposed to do, but give God all the credit. I try to do that.”

Bradfield expects to feel right at home at the parade, which is open to young people 19 and under.  He’s been working with youth, as both father and community leader, all his adult life.

Most recently, he helped out with the police and fire department summer camp, giving a demonstration of the “fire safety house.”

He also helps with the annual Citizens Day, which welcomes community children to the fire department.

The theme of this year’s parade, “Home of the Brave,” was chosen to honor the service and dedication of Bradfield and other “hometown heroes,” who work to keep the community safe, explained Carrie Blankenship, parade director for JSL.

“We think it’s important to honor those who put their lives at risk to keep us safe,” Blankenship said. “We are hoping for a big turnout to show our public safety workers just how much we  appreciate them and the blessing they are to our community.”