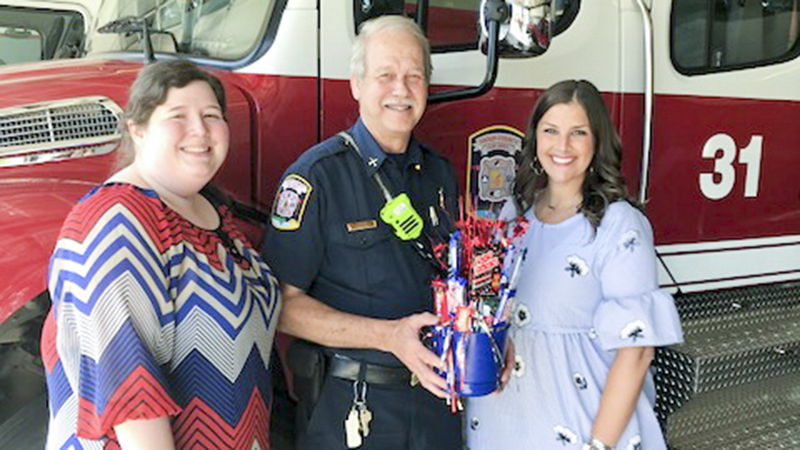 NOTE: This is the fourth story in a four part series featuring the grand marshals for the 2018 Sweet Land of Liberty parade.

For Gene Hogg, fire fighting has been more than a career.

“It’s a calling to do it,” said Hogg, a battalion chief with Troup County Fire Department who will mark 35 years on the job in August.

But first, there’s a big honor in store. Hogg is one of four local public safety workers tapped as a grand marshal for the 2018 Sweet Land of Liberty parade. He’ll be recognized along with Deputy Chief Willie Bradfield of LaGrange Fire Department, Deputy Stephanie Masuoka of Troup County Sheriff’s Department and Detective Jeremey Jones of LaGrange Police Department at the July 4 parade, set for 10 a.m. in downtown LaGrange.

Hogg has been part of virtually the entire history of TCFD.

An all volunteer agency from 1967 to 1980, the department hired its first full-time firefighters just three years before Hogg signed on in 1983. From the first handful of paid fire fighters, the department has grown to three 18-member battalions and seven full-time stations today.

“I’ve seen a lot of changes over the years,” said Hogg, who completed EMT training in 1997 and earned a fire science degree diploma from West Georgia Technical College. When he’s on duty – the schedule is 24 hours on, 48 hours off – he’s shift supervisor for the whole county.

“I respond on every wreck and every fire,” Hogg said. “I also take part in training and handle administrative and record-keeping work. You never know how busy a shift will be. It might be quiet or you might be up all night.”

The unusual work schedule isn’t for everyone, Hogg said, but he appreciates the flexibility it gives him. When his children were growing up, for example, he could often go on school field trips.

“Of course, I’ve worked a lot of Thanksgivings and Christmases, too” he said.

Hogg and his wife, Opal, have two adult children. Their daughter Rebecca is a lawyer now living in Macon, and their son Christopher recently graduated from Auburn and also plans to attend law school.

As a firefighter, Hogg understands the significance of the parade theme “Home of the Brave.” LaGrange Junior Service League chose the theme to highlight brave Americans throughout the nation’s history but also to recognize the “hometown heroes” who put themselves at risk to protect the community.

“It can be dangerous, but we do a lot of training and have a lot of experience to draw on,” he said. “You just have to be focused on public safety.”

He views his role as grand marshal as a tip of the hat to the whole department.

“I’m a representative of Troup County Fire Department, all the guys who serve day by day.”

“We encourage the community to turn out in big numbers to show our support for these ‘hometown heroes.’ We also hope parents will give their children an opportunity to express their appreciation for public safety workers by participating in the parade.”