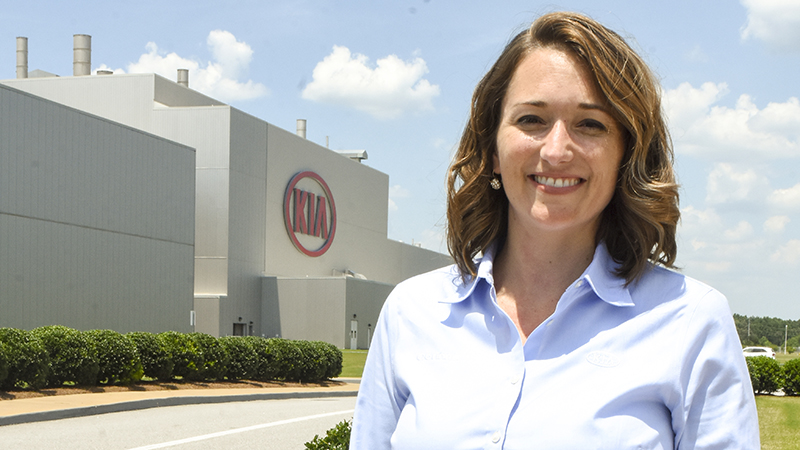 Corinne Hodges said the first thing Kia taught her was to remove the word “can’t” from her vocabulary. When Hodges first started her job as head of public relations at Kia Motors Manufacturing Georgia, the company was only a month away from its grand opening.

At that point, little had been planned for the massive ceremony, which included more than 600 international VIPs.

“The scale of what unfolded in that first grand opening ceremony challenged me beyond what I had ever experienced prior, and I learned quickly that it was like living the ‘Mission: Impossible’ movie,” Hodges said.

“Tasks were put in front of me that I had no doubt could not be done, were totally impossible, yet with enough resources and willpower, we could get them done. To me, that’s where this culture is either a fit for a person or it’s not a good fit.”

For Hodges, 39, it was the perfect fit. She started with the company in 2010 after running a very successful advertising agency in Auburn.

One of her clients was a recruiting company, and recommended she apply for the position at Kia.

Eight years in, Hodges essentially serves as the face of Kia in the LaGrange and Troup County communities. She serves on the board at THINC College and Career Academy, is a key point of contact for The Ray, serves on the Georgia Chamber of Commerce board of governors and she’s the vice chair of the business climate committee. She’s also vice president of Technical College of Georgia Foundation.

Her job at Kia includes both corporate communication and external affairs.

She leads a team of seven people that prints a weekly newsletter, a magazine for Kia employees and their families and oversees Kia Motors Television. One of her favorite parts of the week is a show called “Team Center Invasion” where she gets to surprise employees and introduce them to the rest of the plant.

“I sneak into a team center, and we grab a group leader and get the group leader to tell us a little about his team,” Hodges said.

“Then, we go meet some of the team members. With 2,700 team members on three different shifts, it can be very difficult to know your co-workers.”

Hodges also handles interview requests from the media as part of her position.

But she’s got a lot of other things going on beyond Kia. She’s been married to her husband Arch for 12 years. The couple has two kids — 12-year-old Reid and 6-year-old Adaliz. The family loves being outdoors, exploring and hiking.