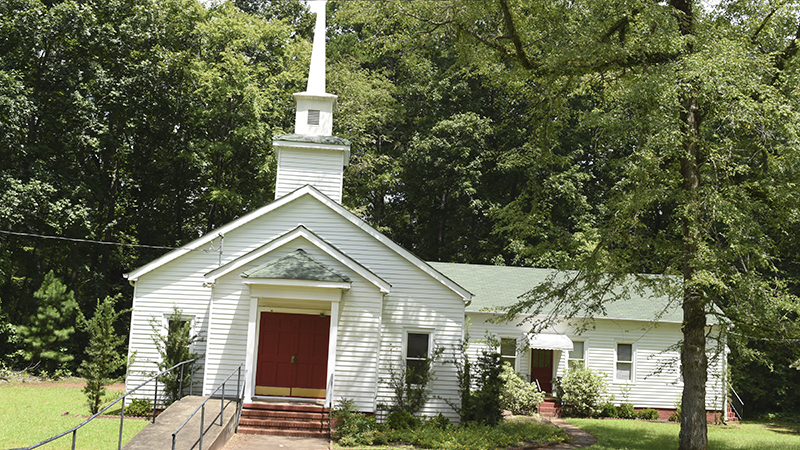 Asbury United Methodist Church has had 190 years of continuous operation, according to longtime members of the church. --Daniel Evans

After 190 years of continuous operation, Asbury United Methodist Church is closing its doors on July 29.

Harvey Bane, who has served as pastor at the church for two years, said the church is being closed by the North Georgia Conference of The United Methodist Church due to its low membership. Bane said the church currently has six members.

“They have been faithful to this church for years and years and years. That is always a shock. It makes it controversial, but facing reality, it has to be done,” Bane said. “A church exists in the cycle of life. They are born, they flourish, they get old and they die, just like a human being. While it’s regrettable, we have to face the reality.”

The Rev. Susan Gary Landry, the district superintendent for the LaGrange District of the North Georgia Conference of The United Methodist Church, said in an email that “a church closing is always painful.”

“In circumstances such as these, when declining membership and available funds don’t allow for a church to be sustained and fulfill its mission, our denomination has guidelines in place to direct the congregation and its leadership through the process of closing,” Landry said. “This is a difficult decision but a courageous one by this church. It is reassuring to know that a church is never defined by its building, no matter how beautiful. A church is a people, dedicated to working for the cause of Jesus Christ. We are convinced that the wonderful people of Asbury UMC will continue their mission in other churches, and the Kingdom of God will continue to grow stronger because of their dedication. Indeed, this closing will enable new ministry to begin — and their legacy will be remembered in this community and beyond.”

They wrote that the church was established by five families in 1828, with parishioners’ meeting in members homes.

Later, it moved to a school house and eventually a log building, across the street from the church’s present site, which is 4320 Youngs Mill Road in Hogansville.

The Shelhorses wrote that the current building still contains timbers from the log building.

Bane said the church building may be sold and the church’s furniture will be offered to other churches.

The church will hold its final service next Sunday at 11 a.m. and is inviting back old pastors and anyone who would like to attend.

“We have invited some of the former pastors to come back and share their [memories] with us, and we are going to have a luncheon in the fellowship hall, but that’s about it,” Bane said. “We aren’t going to make a huge deal out of it. It’s too sad. It’s almost like a funeral.”

LSPA’s ‘Dearly Departed’ puts the fun in funeral this…