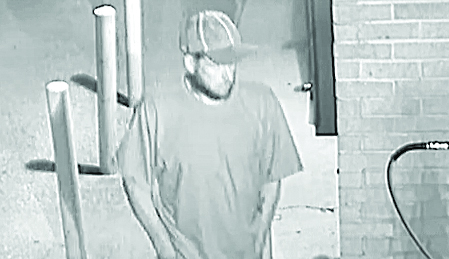 Lanett Police are on the look out for a man who was caught taking quarters on camera. (Contributed)

LANETT — Police are still looking for a suspect in a burglary that happened last Saturday, July 21.

The burglary, which took place at Sanco Car Wash located on S. Broad Ave. in Lanett, was committed at 4:31 a.m. Police have such a specific time reference because the entirety of the act was caught on camera.

“There was video footage of a white male with a beard driving a light colored Chevy sedan,” said Maj. Johnny Wood of Lanett Police Department.

The unidentified, but clearly visible, perpetrator can be seen in stills of the video walking away from the box that accepts car wash payments after having taken the contents from within.

“He broke into the center box and stole all the quarters in it,” Wood said. “That’s what makes it a burglary. In the interior section where the change machine and all that is, in itself, a closed-off building between the carwash bays. Someone entered into that area to pop open the change machine and took bills and quarters.”

The amount of money taken is unknown, but Chambers County Multi-Jurisdictional SWAT Operator Sgt. Phillip Hancock describes the incident in great detail in a press release.

“The suspect is described as a white male with medium build,” the release said.

“He has a low cut beard around his jaw line. He is wearing a dark colored ball cap with white stripes down the seams. The vehicle is a 2004 to 2007 Chevrolet Malibu light in color. There is a large Alabama Crimson Tide sticker on the rear window.”