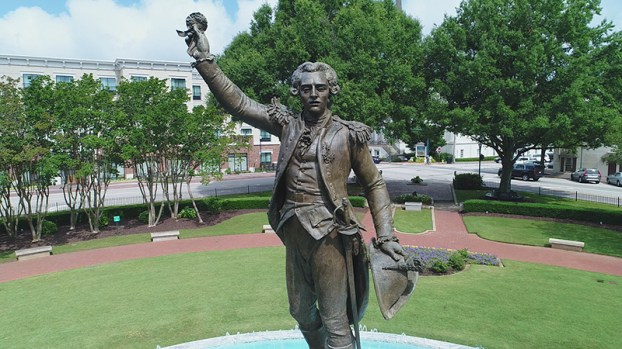 The Marquis de Lafayette’s birthday will be celebrated on Thursday. (Contributed)

The public is invited to attend festivities which include a wreath laying ceremony with dignitaries at Lafayette Square in Downtown LaGrange.

The Lafayette Alliance in LaGrange sponsoring this ceremony.

Lafayette’s statue is on top of fountain in the downtown square in LaGrange.

The Marquis de Lafayette, a French aristocrat, fought alongside George Washington in the American Revolutionary War.

“His story is that of a true hero of both the United States and France. No one did more than Lafayette to help gain freedom for America. He had profound influence in the causes of liberty and equality, not only in this country but also in France and ultimately across Europe. He stood boldly against slavery and other ways of dividing and exploiting people,” Ingram said.

“Memory of Lafayette is aided in America not only by our town’s being named in honor of the Chateau de la Grange, his beloved French home with his wife Adrien, but also by all those other towns, cities, counties, colleges and societies called Lafayette, Fayetteville, Fayette and LaGrange.”

Thursday’s ceremony will include the laying of the wreath and the community orchestra will play to honor his memory and sacrifice.

An elegant birthday party dinner with dancing will be held Thursday evening at Del’Avant. For ticket information call the Legacy Museum at (706) 884-1828.

The City of LaGrange’s television station LGTV will be broadcasting the ceremony live on its Facebook page, at Facebook.com/lgtv.

The most popular exhibition of the year, featuring the work of local artists, opens Saturday, Sept. 8 at the LaGrange... read more