Coaching is a calling for Wiggins 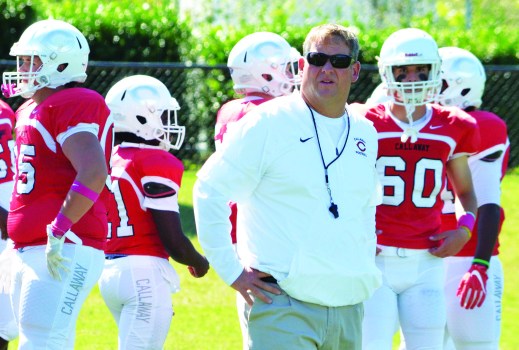 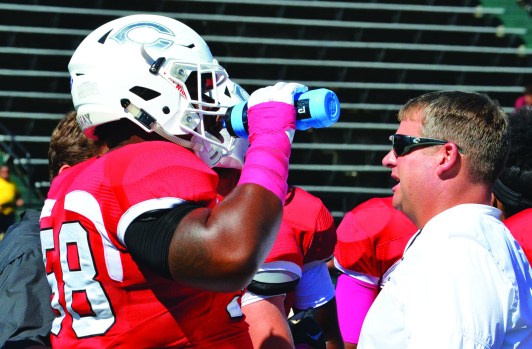 For Pete Wiggins, football has always been an integral part of his life.

When he was growing up in Alabama, Wiggins would often hear his father Mike talk admiringly about some of the greats in the world of college football, including a man who is arguably the best coach the sport has ever seen.

“Growing up, there probably were not very many days that went by that I didn’t hear my dad reference Bear Bryant, and Alabama football, or some great coach,” Wiggins said. “He used that in a lot that he did. So, growing up, we were always on the ballfield, and it just meant a lot to me.”

Wiggins eventually arrived at the conclusion that he wanted to become a coach, to make it his life’s mission to influence the lives of young people through the sport of football.

For two decades, Wiggins has been doing just that, and on Friday night he’ll lead the Callaway Cavaliers against the Rockmart Yellow Jackets in the semifinals of the Class AA state playoffs.

After serving as an assistant coach at Callaway for two seasons under Claude Giddens, Wiggins was promoted to head coach in 2005.

Wiggins has been enormously successful at Callaway, posting a record of 126-44 in 14 seasons, and this is the third time he has guided a team to the semifinals.

Along the way, Wiggins has had the opportunity to be a positive influence on the hundreds of men who have played for him, and that means as much to him as the wins the team has accumulated over the years.

“I think that’s what’s so special about coaching football, is the relationships you build with kids,” Wiggins said. “You see them work and grow and eventually succeed, and that’s not necessarily going off to play college ball. That’s what it’s about is preparing kids for down the road, and that helps me get up every morning.”

Wiggins added that “to see those young kids come back and speak to an elementary class, or to see them in a video giving a birthday present to somebody that might be less fortunate, that’s what it’s about, to see that they care about people, and that they want to help people, and they want to make those around them better. That’s what these guys do. That’s very special, and that tells a lot about their character, and it tells a lot about work ethic and what they’re about. So that’s very special to me.”

One of the things Wiggins has always appreciated about football is the way he believes it helps prepare the players for the challenges they’ll face down the road, on the field and off.

“I really enjoy the relationships you build with these young men, and seeing them be successful, and also seeing them fight through adversity, and I think this game is the ultimate teacher of overcoming adversity,” Wiggins said. “They have to work year-round. They have to work together with other people, and they have to work through a lot of difficulties that down the road will help them prepare for adversities a lot greater than what they’ll see on the field. Again, it’s a great for preparation for what they’ll see down the road.”

After high school, Wiggins played football for the University of West Georgia where he was an offensive lineman.

Following graduation, Wiggins began his coaching career at Highland Home in Alabama where he first worked with Claude Giddens.

From there, Wiggins headed to the northern portion of Georgia to become an assistant coach at Murray County High where he was a member of Bill Napier’s staff.

In 2002, Giddens succeeded Sonny Cummings as Callaway’s head coach, and he asked Wiggins to be a part of that staff.

Wiggins agreed, and for three seasons he worked closely with Giddens, not knowing that his time as a head coach was on the horizon.

Giddens stepped down following the 2004 season, and following the coaching search, Wiggins was offered the head-coaching position, and he accepted.

The rest is history.

Since 2008, the Cavaliers have reached double digits in wins eight times, they’ve captured six region championships, they’ve made it to the state quarterfinals five times, and they’re preparing for their third semifinal game since 2013.

Callaway has become one of the most consistently successful programs in the state, and while Wiggins is the man in charge, he stressed that it’s been a team effort.

“I’m really proud of the level of dedication from our coaching staff, from our players, to the community,” said Wiggins, who has three children with his wife Amy, who was the former head athletic trainer at Callaway. “I remember the early days of let’s build this foundation, let’s get this started, and we’ve got to do it right to get where we needed to be. There’s a lot of work that went into that. A lot of kids over the years have paid a large price to get us to where we’re at, as far as the work in the weight room, and at practice, and then on the field. I’m extremely proud of the successes we’ve had.”

Wiggins added that “it doesn’t come easy. It’s all about hard work. There are no secrets to it. It’s in the weight room, and lifting when you don’t want to lift, and lifting when it’s hot, or something hurts. It’s the same way on the field. We’re going to practice, and we’re going to practice hard and fast, and those things pay off, and I think the consistency with our coaching staff has been very instrumental.”

A handful of other current coaches, including Kareem Douhne, Terry Hayes and Tray Tucker, have also been with Wiggins since 2005.

“We’ve got a great family here,” Wiggins said. “Coach Napier and coach Hubbard….they’re great men, and they’re great leaders in our school. They do an incredible job leading the kids, and leading the football team.”

Wiggins appreciates the lessons he learned as a young coach from Claude Giddens, as well as Bill Napier, who died in 2017 after a four-year fight with ALS.

Wiggins has been able to work alongside two of Bill Napier’s sons, including Matt Napier and Curt Napier, who left the staff a few years ago to return to his native Murray County.

“I worked for coach Giddens at Highland Home to start off my career. I wouldn’t be here if it wasn’t for coach Giddens,” Wiggins said. “He instilled a great deal of work ethic in me. I learned a whole lot of ball. I think that helped me to be a better person. Later on I went up to north Georgia and I worked for Bill Napier, and it was the same as coach Giddens. Just a first-class individual, and I learned so much ball from coach Napier. Those two guys were really instrumental in the football end of me being here. I don’t think I would be here without coach Napier and coach Giddens. Both of those men are very special to me and they’re great men.”

No one has had more of an influence on Wiggins’ life than his father Mike, though.

The two have always had a close relationship, and Wiggins calls his father his “best friend.”

“I talk to him just about every day,” Wiggins said. “If I don’t talk to him every day, I feel like something’s wrong. In watching him throughout my life, and the work ethic that he’s had, he’s always had a great deal of weight on his shoulders, throughout his career. Again, he’s been a great inspiration to me. He’s a very special person, and he’s here supporting the Cavaliers every Friday night, regardless of where we play. And when was in North Georgia he was always there every game, and when I was in Highland Home in south Alabama he was at every game. He and I have some special memories as far as being with the kids, and cooking for the kids, and it’s a lot of special ballgames that he’s got to see along the way.”

Wiggins added that it comes to “big decisions, I’ve always had his advice on, and throughout my career. I love him, and he’s my best friend.”

Mike Wiggins will be in Rockmart on Friday night as Callaway attempts to reach a state-championship game for the first time.

Whatever the outcome of that game, the way Callaway does business won’t change.

Wiggins said every player, whether they’re a five-star recruit or a third-string tight end, will be asked to show the same level of commitment.