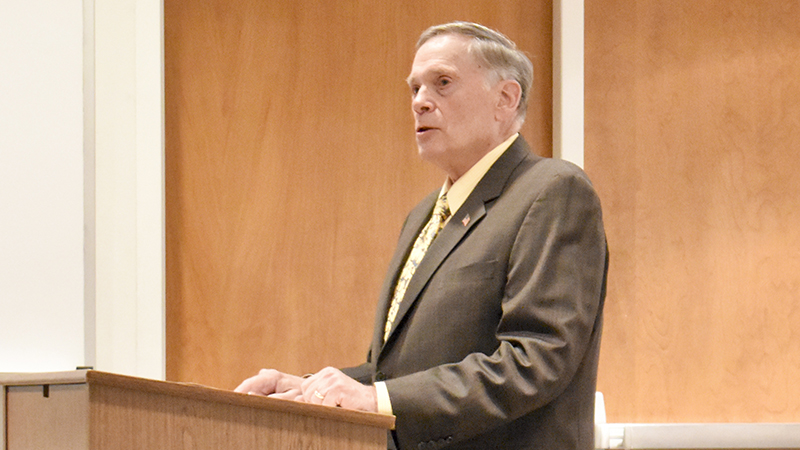 On Thursday, retired four-star U.S. Air Force General and former member of the Joint Chiefs of Staff John Jumper spoke at LaGrange College, sharing some of his hard-won wisdom with students.

Jumper also spoke at the LaGrange Rotary Club on Wednesday, but he said that he was especially excited to speak to the college students, because of the potential impact his words could have on their lives.

“It is always a pleasure for me to speak to especially young audiences,” Jumper said. “One of the benefits of living to old age is that I can look back on my life and hopefully share with you some of the wisdom of 74 years of life and make you aware of things that I have learned that seem to be universally true.”

In that 74 years, Jumper has been involved in military operations with long-lasting impact, both in the regions where they took place and across the world.

“He was involved in Operation Northern Watch — which was an operation to protect the Kurds in Iraq during the 1990s to prevent massacres — Operation Southern Watch — to protect the Shiites long before Operation Iraqi freedom,” said Dr. John Tures, the LaGrange College political science professor who helped organize the talk. “He was also the head of Operation Allied Freedom. He was the Air Force chief of staff on 9/11 and served as that for Operation Enduring Freedom and Operation Iraqi Freedom, and if you know how the Air Force was able to accomplish its tasks, I think that record speaks for itself.”

Jumper shared what he calls “Jumper’s Rules of Life,” which he said could potentially save the young audience from mistakes that could stick with them throughout their lives. The rules were simple and could apply to anyone in any field, but as Jumper pointed out, they are often ignored by otherwise capable people.

“Number one is, this is not a practice life,” Jumper said. “This is the real thing. You don’t have time later on to make up for mistakes that you are making now, and the mistakes that you make now live with you the rest of your life. When I was asked to be the chief of staff of the air force, one of the things that I had to produce was my college transcripts. It stuck with me. I was 55-years-old at the time, and it stuck with me all my life.”

Jumper told the college students that they were in the process of establishing their records — both good and bad — that will follow them throughout their lives. He warned them that those records could make way for bright futures or limit opportunities down the road. He encouraged the students to greet those opportunities face-to-face.

“Number two, true success depends on your ability to develop yourself into a leader,” Jumper said. “There is no such thing as leadership by Twitter, by Facebook or by email. It is a contact sport. It is face-to-face, and we’ve lost a lot of those skills. You need to put yourself in a position where you are in touch with your fellow human being.”

Jumper discussed how face-to-face discussions often lead to different attitudes and results than electronic communication, and he emphasized the idea that leadership does not always come from the person at the top.

“Inspire yourself and others to do better things,” Jumper said. “You can’t do that if you isolate yourself and avoid human contact, so you’ve got to develop those skills. Leadership emerges at all levels.”

He told the story of an Air Force crew chief who inspired roughly 50 people, both above and below him in rank, to work together to get a plane with engine problems where it needed to go during an exercise. The act won the crew chief the admiration of those who recognized what he had done.

Jumper encouraged the students to become part of something bigger than themselves and give their best effort to the tasks that they are working on in the moment.

Finally, he encouraged students to learn about history, so that they will understand why things are the way they are and how they got that way. He said that learning the history of places where he served informed his understanding of other countries and cultures.

“He is inspiring,” said LaGrange College President Dan McAlexander. “He has got real stories to tell, and I think it is encouragement to [the students to] read their history. It will matter to them.”