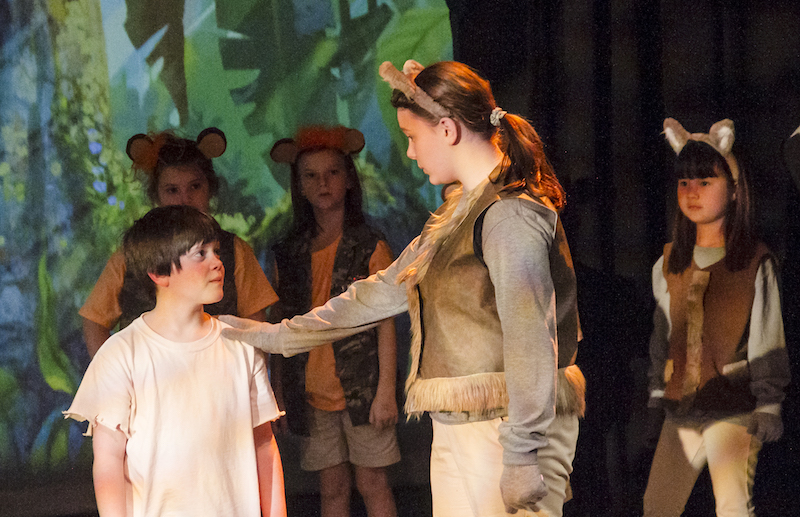 The Lafayette Theatre Academy is currently putting on a production of "The Jungle Book". -Contributed

An adaptation of Rudyard Kipling’s classic, The Jungle Book, opened Thursday with the first of four sold out performances at LSPA. The production features a cast of 35 Lafayette Theatre Academy students, with an additional 11 students performing introductory scenes.

Set in the jungle of India, this play tells the story of Mowgli, a boy raised by wolves, educated by a panther, entertained by a bear, and challenged by monkeys, a python, and a dangerous tiger.

“Kathryn Schultz Miller, the playwright for this adaptation, makes it very clear that this production is also about community,” director Carol Cain said. “We have been encouraged to think of how each animal and each character in the play is important and what each contributes to the community, a lesson that is important on the stage, in the classroom, and in life.”

Cain said she and her student actors are inspired by the law of the jungle which is often quoted in the play.

A family friendly production, one of the special treats of the play is audience participation.

“Many of the entrances and exits of our animal and human characters are made through the audience,” Cain said. “Some of the characters will interact with audience members and ask for their help throughout the show.  We’re even asking audience members to make a few animal noises.”

As you might expect in a play about the jungle, there are plenty of animals.  In addition to the familiar characters of Shere Khan, the tiger, Baloo, the bear, Kaa, the python, and Bagheera the panther, there is a jungle full of snakes, monkeys, birds, elephants, and other large creatures.

“Janet Powell, our costumer, has created elaborate turbans and headpieces for our actors, as well as wonderful, kid-friendly costumes that give each animal personality,” Cain said. “Plus, the LSPA staff has converted the entire Black Box theater into a jungle.”

“The biggest treat, however, is watching this cast of second through sixth graders take the stage with such poise and confidence,” Cain said. “They have taken the information we give them in our Creative Dramatics classes and transferred it to their performances. As an instructor, that’s what you want to happen, and they make it happen so beautifully in this production. Can you tell how proud I am of them?”

Adding to the fun of each performance will be the presentation of other Rudyard Kipling stories acted out by students from two other Lafayette Theatre Academy programs. Acting Out is the newest and youngest academy class for Pre-K through first graders. Dramatically Unique is an all-inclusive class which provides a transitional curriculum for exceptional students with different abilities and limited theatrical experience. Each of these classes will be presenting a scene from Kipling’s “Just So Stories.”

“Experience on stage is a vital part of any theatre education, and these brief scenes are the perfect way for our Acting Out and Dramatically Unique students to perform in front of an audience without having the pressure involved in a full-production,” said Amy McDow, director of the Lafayette Theatre Academy. “We are so proud of each student in the academy and are thrilled to see many of them take the stage for the first time in this engaging production.”

The Jungle Book is presented by Kid’s Zone Dentistry and additionally sponsored by All Pro Auto Group and Eastern Industries.  The Lafayette Theatre Academy is a part of the Lafayette Society for Performing Arts, located in downtown LaGrange.  Performances of The Jungle Book are held in the LTC Black Box Theatre in their picnic theatre setting.

For more information about LSPA and its organizations, please visit Lsparts.org or call (706) 882-9909.