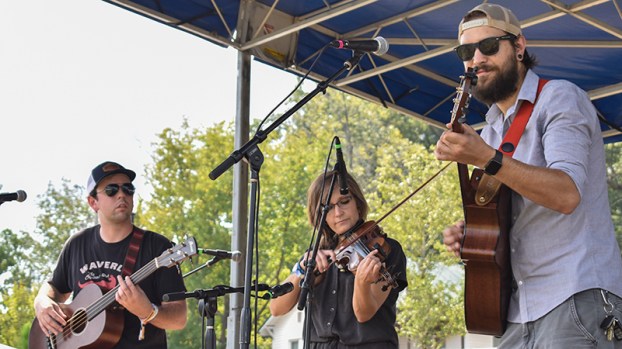 Thousands of concert-goers filled downtown LaGrange on Friday and Saturday during the Rockweave Music and Arts Festival.

The music festival was created to be a family friendly event to draw tourists to downtown LaGrange, while raising funds for music and art programs in Troup County Schools. Attendees of all ages could be seen enjoying music at Sweetland Amphitheatre and around Southbend Park during the festival.

“Rockweave exceeded all of our expectations and fully demonstrated the power of music, arts and community, when we are all willing to get behind a mission,” said Keyal Loveland, the director of Sweetland Amphitheatre who helped organize the festival. “The turnout was incredible. We had more than 4,000 in attendance throughout the weekend.”

Organizers noted that attendees included festival-goers of all ages having fun together.

“I think the thing I enjoyed most about the festival was to see the reactions on people’s faces when the bands they loved came on the stage, and they were enjoying themselves,” said Rob Goldstein, co-owner of Wild Leap Brew Co. who helped organize the festival. “Also, looking out into the crowd and seeing 19-year-olds and 59-year-olds and 9-year-olds all having a great time. That was really what we set out to do is create an experience that everybody can enjoy, and we hope they feel the same way.”

“Rockweave brought a new kind of energy and excitement into downtown,” LaGrange Mayor Jim Thornton said. “People from all over the southeast met up with local residents to enjoy good music, good food and a great atmosphere. This is part of what makes a city vibrant, and we had vibrancy in spades this weekend. It’s was a good event for LaGrange.”

But, the festival did more than just give tourists a reason to visit and locals something to do for a couple of days. A portion of the funds raised at the festival will benefit art and music programs in Troup County schools.

“Thank you for the support in coming out to this first year of the festival,” Goldstein said. “This event was not only created to bring tourists to LaGrange, but also to raise money for music and arts programs in Troup County schools, and while we are still tallying all of that up, we are very excited that we’ll be able to contribute to that very soon.”

Some of the students who will be impacted were likely in attendance with a number of children in the crowd and performances by young groups like Nobody’s Rose and a group from the Young Symphony of West Georgia’s high school advance group performing early in the day on Saturday.

The festival also provided an incredible experience to the young performers.

“I think it was great exposure and just a neat professional experience for them,” said Stacey Hardigree, YSWG conductor. “They seemed to really enjoy the opportunity.”

YSWG is a vocal instructional school for students in third through twelfth grade focused on group singing. The group has performed at a variety of venues in the past, including at an Atlanta Braves game in June. However, Hardigree said that the festival was an entirely new experience for the young performers.

“We’ve done lots of performances around the world at big venues and small venues alike, but this was unique,” Hardigree said. “We’d never done a commercial music festival, so it was a different sort of experience.”

Local students also took part in creating some of the yarn creations for the festival, along with volunteers of all ages.

“The yarnbombing is way cooler than I ever thought [it could be],” said Sherri Brown, who helped organize the yarn bomb. “It looks great. We had 50 volunteers, and we’ve been installing for the whole week.”

Brown said there was a wide range of ages among the yarnbombing volunteers — ranging from children to a participant in their 80s.

Those volunteers used an estimated 82 miles of yarn to create the decorations seen throughout downtown LaGrange. That’s enough yarn to stretch from Wild Leap Brew Co. to Suntrust Park, with some to spare.

“It has been wonderful to see how many people it brings in from all over,” said Brandy Adams, from The Herb Shop. “They said they love how all of the yarn bomb seems like it has brought the community together for this festival.”

Several local stores and restaurants had booths at the festival, where both visitors and locals got to try out a bit of what LaGrange has to offer, and for local stores that offer shipping, that meant the chance to sell to new customers for years to come.

It also meant visitors paying into the local Special Purpose Local Option Sales Tax and Hotel/Motel Tax, which will go back to benefit the area.

“[Through the festival] we sold several hundred hotel room nights to guests that were coming to the event,” Goldstein said. “It created an opportunity to have people from — not only all over the state and the southeast but all over the country — experience the festival. We saw people from over 10 states in the United States purchase tickets to come to this event.”

According to Goldstein, the two-day music festival attracted visitors from Oregon, Washington state, Connecticut, New York, Alabama, Mississippi, South Carolina, Florida and even Australia. And those weren’t just one or two people from each area. Loveland said that 53 percent of attendees were from out of town and 20 percent were from out-of-state.

“For me, just riding around town and seeing people that I know are from out of town — I can tell the way they are walking up and down the streets — and it makes you feel good because you know they are spending money,” said Bobby Carmichael, the chairman of the board of Visit LaGrange. “They are eating. They are staying at the hotels, and so the economic impact is huge.”

A number of artists who performed on Saturday signed two guitars and some concert posters that will be auctioned off on the Rockweave website later this week, and according to Goldstein, 100 percent of the funds from the auction will to art and music programs in Troup County.

Look for the auction later this week at Rockweave.com

For years, Patrick Sims has wanted to break off on his own and run his own real estate business.  Now,... read more