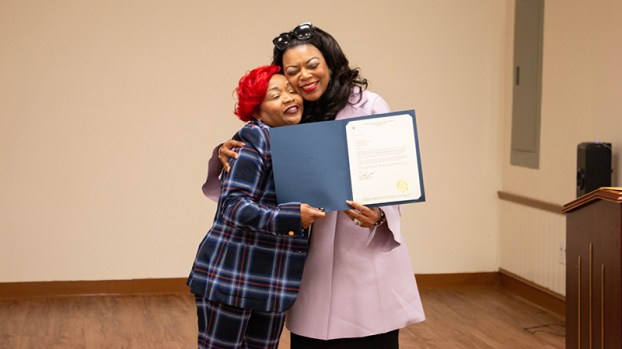 The EnVision Center officially opened its doors on Tuesday, joining the LaGrange-Troup Chamber of Commerce and is ready to serve the residents of the LaGrange Housing Authority.

“This is a momentous moment for the Housing Authority,” said Zsa Zsa Heard, CEO of LaGrange Housing Authority. “This has been my mission, to deliberately interrupt poverty. Because the people cannot remain in those places, if you want to put them in beautiful buildings.”

Heard said that the housing authority does things different than others.

“People are going to have to get on board because we don’t just house,” Heard said. “We house people to send them to a different and better place. It was never intended for them to stay 66 years, we just allowed it. “

Now that the EnVision Center is in place, Heard expects progress to be made with bringing up the community.

Board member and resident Alice Vines spoke about her experience living in the complex since 2014.

“I was an officer and I lost my job, I lost my home, I lost everything that I had,” Vines said. “I came over here and got an apartment. I was blessed.”

But when Vines moved in, she said it was a very different place than what it has grown to be now.

“When I first came, I would sit on my front porch and I would read my Bible,” Vines said. “You saw a lot of strays, it was guys mostly, and they were so bold. I would see them on the side of my building just smoking reefer. As time went on Heard started doing some things. Cameras were put up … all of sudden you didn’t see any strays coming around.”

Vines said it’s because of programs through West Georgia Star that the housing authority offered that her and her granddaughter were able to achieve educational goals they did not believe were possible.

West Georgia Star is LaGrange Housing Authority’s resident service non-profit corporation that promotes self-sufficiency, poverty decentralizing and to help families get well-paying jobs so they can afford to not need public assistance.

“We changed that [the name] because now people are going to be raised from the ashes,” Heard said. “They’re going through a rebirth and will be reborn again and be great people.”

Denise Clevend-Legget, who is the Housing and Urban Development Georgia Southeast Regional Administrator, said that they don’t always say yes to areas that request an EnVison Center because they aren’t ready for it.

“When I came here, I saw that things were right,” Clevend-Legget said. “I bring you greetings on behalf of Secretary Ben Carson.”

According to HUD.gov, in 2018, U.S. Housing and Urban Development (HUD) Secretary Ben Carson traveled to his hometown of Detroit where he planted the first 17 communities of EnVision Centers. These centers are one of his signature initiatives to help families achieve self-sufficiency.

“Leadership is the key to any successful organization,” Clevend-Legget said. “If you have any organization that has a great idea, but if you don’t have a person to push it forward and to make it a reality then it’s just a good idea. You have Zsa Zsa Heard, who is one of the best leaders I have ever met.”

Clevend-Legget ended on a quote from Emily Dickinson.

By: Grace Braswell With fall weather finally setting in, LaGrange was getting into the spirit of the season last Saturday... read more