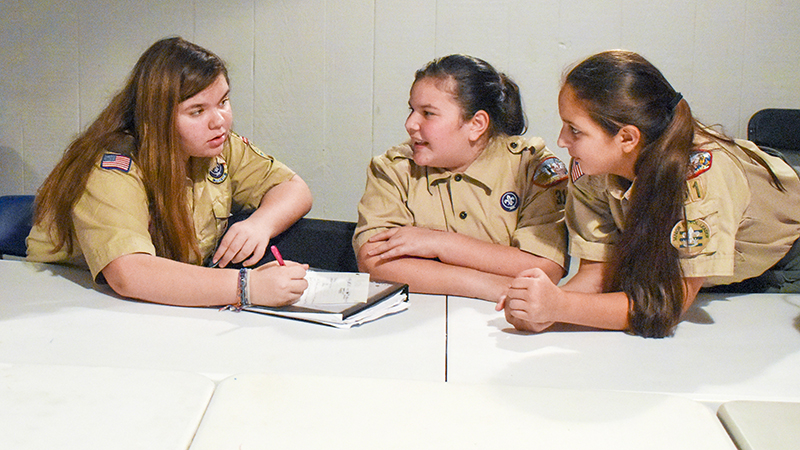 Troop No. 31 of Scouts BSA, formerly known as Boy Scouts of America, was planning an upcoming camping trip as its meeting on Thursday night.

That’s a routine activity for scouts, but this troop is different than most Scout BSA troops. Every scout in troop 31 a girl.

Crystal Brawner has two sons, both Eagle Scouts, and when she began to hear about the Boy Scouts allowing girls, she wanted to look into it for her two youngest children, who are both girls. The Boy Scouts of America started allowing girls to join in February.

On Thursday, the 10-member all-girls BSA troop was researching a camping trip. BSA outlines specific parameters for the trip, including that it must have a hike of at least 1,000 feet in elevation. The troop was researching Mt. Cheaha in Alabama and Stone Mountain in Georgia at Thursday’s meeting.

The scouts plan everything, even shopping lists.

On one camping trip, the scouts made a spaghetti night shopping list of noodles, frozen meatballs but no sauce. Rules state that the shoppers cannot change the list if there’s an error, so the troop had to go with what they had.

Jessica Martinez, 11, had an idea.

“We could use the barbecue sauce we have leftover to spice the meatballs, and use our leftover cheese on the noodles,” Martinez said.

The barbecue sauce was a success.

On another outing, the troop came through for Martinez. They were supposed to complete some swim requirements so they camped out in order to be at the pool’s open swim at 5:30 am.

Jessica’s mom, Robin, warned the leadership beforehand that she wouldn’t swim at home, so not to expect her to get in the pool.

The pool opened, and the lifeguard was there.

“Don’t let this one drown,” Brawner mouthed to the guard.

The girls jumped in and Martinz jumped in right after them, but the requirements state scouts must jump into water over their heads. Martinez was willing and asked if someone could go with her, so scouts Campbell Vice and Ellie Moon went with her.

“We must’ve waited 40 minutes for Jessica to come up,” Brawner joked.

However, it only felt like that. Martinez said she came out of the water like it was nothing.

Jessica was getting tired, but she wanted to finish the last test, swimming the entire pool. As she came back from the wall for the final lap, the group could see her fatigue. One by one the girls jumped in to cheer her on as she completed the final lap.

“We filled that pool with tears,” Brawner said.

This all-girl BSA troop learns soft skills like empathy easily because they naturally respond that way, according to Brawner.

“You don’t have to teach it,” she said. “Boys don’t respond the same way.”

The girls in Troop 31 have a motto that they live by together: “You want to build a team so strong that you can’t find the leader.”

The scouts came up with that themselves. It guides them. Still, for the purpose of scout regulations, the troop elects a new leader every six months. Right now, the Senior Patrol Leader is Tasha Brawner. She appoints an assistant, who is Campbell Vice.

Then, the troop has two patrol leaders, Jessica Martinez and Ellie Moon.

As leaders, they get to experience group dynamics and work with young personalities.

“It’s my job to empower them to succeed even if they don’t want success,” Vice said.

And that means getting to know what motivates each scout, a skill that seems to come natural to this group.

Lloyd Presbyterian Church is what is called the troop’s charter organization, a kind of sponsor who provides a committee, adult leadership and re-chartering fees. The troop has to apply for its BSA charter every year. Lloyd Presbyterian also provided a bonus — a private campground.

“We wore that out this summer,” Brawner said.

Campouts help scout learn skills and move up the ranks.

BSA has eight ranks and the requirements for each have remained largely unchanged for a century. Merit badges that are earned do change, so that scouts are always learning useful contemporary skills.

“I had never been camping before,” Tasha Brawner said. “I didn’t know how to tie more than one kind of knot, or use a knife, or use an ax.”

The girls plan which skills they will learn on an outing.

“A lot of the year is scheduled,” Vice said. “It’s not stressful, but the system makes you want to complete it.”

And Jessica, the youngest of the group, was quick to add there has to be a balance.

“As you’re doing these things, you get to do a lot of fun activities,” she said. “Some like to check the boxes [of scout requirements] and some like the fun experiences more.”

Lila Doughtrey does not have her eye on Senior Patrol Leader. She wants to be a troop guide.

Guides help new members learn basic skills like tying knots and makes sure scouts are active. Lila, the most recent member, would be passing on what’s been taught to her.

At their next meeting, the girls will continue their research for their hiking trip.

In research Thursday, they determined Stone Mountain’s hike is only around 750 feet — shorter than the required climb — so they know it’s out.

The Troup County troop is getting ready for its next adventure.