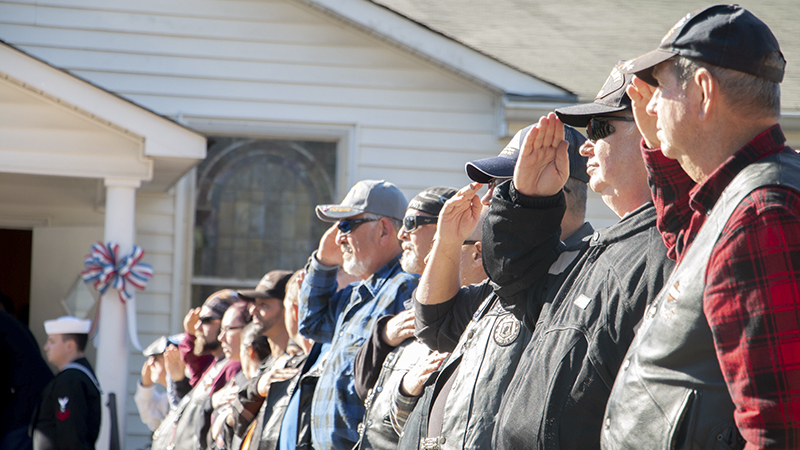 He’s finally been laid to rest.

On Saturday afternoon, family members of Sgt. Billy Joe Maxwell, including his two surviving brothers, Pete and Jerry, and veterans from across Georgia gathered in Hogansville to pay their respects to the fallen solider.

Sgt. Maxwell was reported missing in action on Nov. 30, 1950, while he was serving in the North Korean War as a member of Heavy Mortar Company, 31st Infantry Regiment, 7th Infantry Division.

He was declared killed in action shortly after, but his remains could not be found.

That changed in 2018, when North Korea turned over 55 boxes of remains to the United States, including Maxwell’s remains.

His remains were brought back to Hogansville on Thursday, and the funeral was held on Saturday.

“While there is a great deal joy being able to be here today with Billy Joe’s remains here with us, there is also such great grief,” the Rev. Dr. Craig Williamson said. “There was always that vision that the family had that he would walk back in our doors one day. Unfortunately, that didn’t happen.”

It was 68 years ago when a telegram interrupted Jerry’s birthday party in January 1951 that changed the Maxwell family’s lives forever.

Sgt. Maxwell’s brothers and surviving family members were able to welcome him home on Nov. 7 and close the door on the mystery of their brothers remains almost seven decades later.

Billy Joe’s parents, James Noble and Eula Mae Maxwell, died in 1954 and 1985, respectively, without knowing what happened to their son.

“We’re here today to write another chapter,” Williamson said. “Not necessarily a final chapter because there’s still a lot of Maxwell life in his room that’s yet to be lived. As we lay to rest the remains of Billy Joe Maxwell, as we lovingly hold the memories that give us grief even today as we remember the service of Sgt. Maxwell.”

Fond memories and stories of Sgt. Maxwell were told by his brother Pete and a poem written by his late brother Charles, who was a World War II veteran.

“He speaks the reality of our nation’s choices upon families, upon families from small forgotten communities like Hogansville, Georgia,” Williamson said.

In letters Sgt. Maxwell wrote home, he talked about his dreams of opening up a café when he returned home from the Army.

“He writes to his brother, Jack, who was in the army at the same time in Korea,” Williamson said.

“He writes to tell Jack that he’s disappointed he didn’t get into cooking school, instead he wound up a gunner in the heavy mortar company.”

Williamson said that his letters made a constant reference to his older brother, Charles.

“Every now and then in a new paragraph it would start, ‘well tell Charles,’ and ‘don’t forget to tell Charles,’” Williamson said.

Sgt. Maxwell showed his ambition to come home after the war in one of his letters home.

“A month before Billy Joe went missing, he wrote a letter hearing about home in Hogansville,” Williamson said. “Apparently, all the pretty girls were getting married. He was concerned about what he was going to be left with when he returned home.”

After the funeral service was over, and Sgt. Maxwell was finally laid to rest, his brother Pete reflected on their lives growing up.

“We lived in the Mill Village on a dirt road at that time,” Pete said.

“We would get out there and play baseball and play football in the field behind our house. He always carried a smile on his face.”

Pete said he will always remember his brother as someone who was never unhappy about his life.

Veteran of the Year