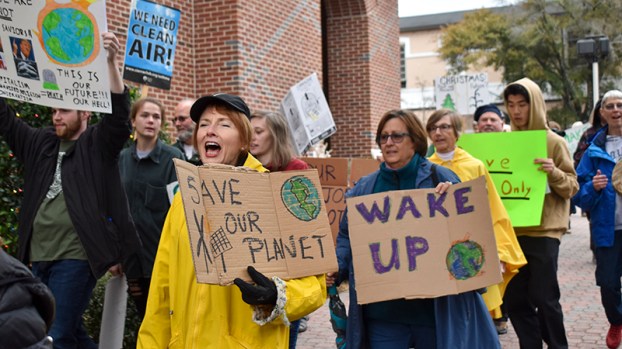 Locals show up for climate rally in LaGrange

Despite the chill and a light drizzle, a small crowd gathered at Flagpole Park on Friday afternoon to talk about climate change and what could be done at all levels to protect the environment.

Hurd said that he and his peers have taken time to learn about climate change, but it will take everyone working together to get laws passed to make change happen. Fellow speaker, Climate Activist John Noel noted that in many cases governments can actually save taxpayer money through sustainable actions.

“There’s an opportunity for us to save taxpayer money in government places and to save money in our homes,” Noel said. “I mean, it’s more soccer balls and footballs for you if you can save some money. … Switching from old light sources to LEDs — things you can buy at Home Depot and Lowes — those things matter, like big time, and that 90 percent reduction might be an exaggeration in some instances, but it’s 60-70 percent of all instances where you go from old light sources to new light sources. So, what about our HVAC system? What about solar?”

Noel encouraged attendees to speak up and encourage local government to make environmentally-friendly changes, which is something that the City of LaGrange has been slowly working on for years.

“There are some things that everybody sort of agrees on. Certainly, I think all of us would,” LaGrange Mayor Jim Thornton said. “We have to be better stewards of our environment. We have to see what we can do on a local level and a state level, federal and certainly a global level to make sure that the air we breathe is clean, the water we drink is healthy, to make sure that our animals and plant life is preserved — all of those things that interrelate.”

Thornton shared some of the environmentally friendly measures that the City of LaGrange has already taken, including installing solar cells on the LaGrange City Council Chambers, which were visible from where he spoke. However, those panels were only the beginning.

“The City of LaGrange like just about every utility company in the south, in Georgia, has historically been a coal generating utility,” Thornton said. “That was the historic source of a lot of our electricity, and over the last couple of decades, we have been significantly reducing our dependence on coal. First, that was by switching some of our electricity to natural gas, which still is a fossil fuel, but is much less polluting than coal is. We have switched a lot of our production now to nuclear, which is not a perfect solution, but it is a zero-carbon emission solution. … With the advent of solar technology, we’ve realized that we can become more reliant on solar solutions.”

Thornton said that in the next year, LaGrange expects for there to be solar generating capacity in the community.

Thornton also spoke on the city’s efforts regarding water and soil erosion management, installation of LED lights and local partnerships with groups like Chattahoochee Riverkeeper.

The City of LaGrange was recognized on Thursday by Keep Georgia Beautiful for its Leaving LaGrange Better Than We Found It campaign.

County Manager Eric Mosley also spoke on some of Troup County’s environmental efforts like paving the first-ever crumb rubber road in the state, partnerships with groups like The Ray and the use of locally produced mulch in various projects.

“I want you to know that having a safe and clean environment matters to all of us,” said State Senator Randy Robertson (R-Cataula). “It is not a political thing.”

Robertson said that his wife is the executive director of Conservatives for Clean Energy for the State of Georgia, and he spoke on some of the state-level sustainability efforts.

Dr. Margaret Schaufler, a local doctor, said vulnerable populations — like babies, the elderly, immunocompromised individuals, people living in low lying areas, people living in poverty and the uninsured — will face health problems caused by climate change first. She also shared some of the possible health concerns related to global warming, which included heat stroke, dehydration, higher prevalence of ticks and mosquitoes and the multitude of concerns that come with poor air quality.

Water quality was also a reoccurring topic throughout the rally.

Water wasn’t the only essential that speakers said climate change could impact.

Eric Simpson, a local farmer, also spoke at the rally, addressing some of the problems that local farmers face with climate change.