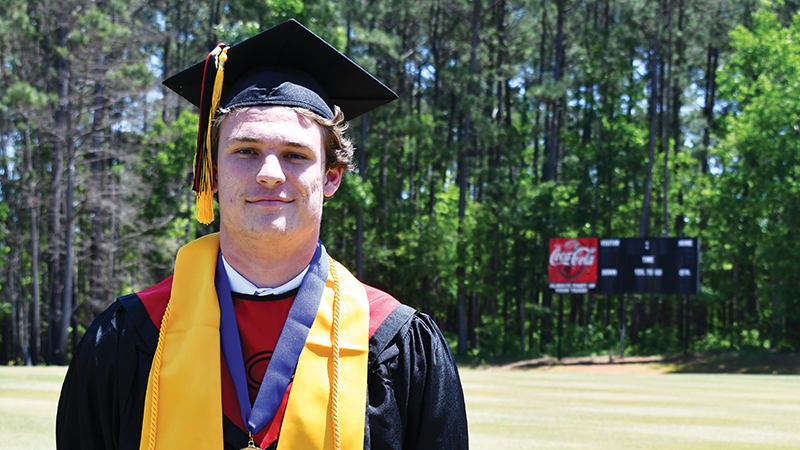 Callaway High School Valedictorian Jared Nation poses for a photo with his graduation cap and gown on the Callaway outdoor practice football field. Nation was not only a success in the classroom but also on the field as an offensive lineman. — Photo by Kevin Eckleberry

As Jared Nation prepared for his high-school journey, he set a lofty goal.

“When I got in high school, I thought, ‘I want to go for valedictorian,’” Nation said. “I thought I might have a chance.”

Nation, showing the academic discipline that also helped him become a successful athlete at Callaway High, has achieved that goal.

Nation, in close competition with Dylan Almon, is the Callaway High valedictorian, and the honor is the culmination of four years of hard work and dedication.

“Until about my junior or senior year, it was just an afterthought because it was so far ahead,” said Nation, who will be a student at Georgia Tech this fall. “And then Dylan Almon and me started to move away from the pack, and it became a heated competition. We’re friends. Had he been valedictorian, I would have been proud for him. Either way was fine, but I was proud to be able to do it. It was really cool.”

For Nation, being a part of the Callaway High family for the past four years has been a special and impactful experience.

“Callaway High is an intense family,” Nation said. “The teachers care about each student. I could think of many teachers that I think of as closer to family than teachers. And the coaches are the same way, and the administration absolutely cares about the students.”

While Nation achieved success as a student, he also excelled in his athletic endeavors.

Nation was a four-year member of the football program, and he saw a lot of time on the field the past two seasons as an offensive lineman while helping lead Callaway to back-to-back appearances in the state semifinals.

Nation also played tennis, and he was a standout doubles player on the 2019 team that made it to the third round of the state tournament for the first time in the program’s history.

Nation was on the wrestling team as a freshman and sophomore, and planned to participate in track and field as a senior. However, that season ended before it started because of the coronavirus.

Nation is appreciative of the coaches who have helped guide him throughout the past four years, as well as the teachers who have been with him every step of the way.

Among the teachers who played a part in Nation’s academic success are Melissa Stanley (math) and David Curtis (science).

“Mr. Curtis has been a pivotal part of why I love science so much,” Nation said. “I ended up having him for physics and chemistry, and the way he teaches, he just excites everyone. And Mrs. Stanley, her classroom feels like a family. She’s a friend to you. It’s almost like she’s learning the math with you, and she’s the one teaching it.”

Nation is also grateful for the support of his family, including his mother Michelle, his father Curt, and his younger brother Dylan Nation.

Michelle Nation was a staff member at Callaway when Jared was a freshman, and he has leaned on her heavily.

“She was here when I got here,” Nation said. “She’s one of my biggest motivators, and she’s so helpful. Without her, I definitely couldn’t have been valedictorian.”

When Nation began exploring his plans for after high school, he narrowed his focus to two schools he believed would suit his academic needs.

“It was a difficult choice for sure,” Nation said. “It was on the line between the University of Alabama in Huntsville and Georgia Tech until the last minute. I want to go into aerospace engineering, and they both have phenomenal programs. The distance really didn’t bother me, being close to home or being far away.”

In the end, the comfort level Nation felt on the Georgia Tech campus made the difference.

“Being at Georgia Tech would be very similar to being at Callaway,” Nation said. “It’s high-caliber people being all around you, whether it’s athletes or students. And the atmosphere is phenomenal. You’re standing in the center of campus, on the campus green, and you look around, and you see nothing but other people. The interstate’s a mile down the road, and you can’t tell at all. You can’t tell that you’re in the middle of the city. It’s like it’s its own little town.”

Nation has had a passion for flight of any sort since he was in middle school, and he’s looking forward to being a part of the next generation of men and women leading the way in the aerospace industry.

“I’m slightly afraid of heights,” Nation admits with a grin.

“It’s not debilitating, but I’m skittish when I’m up high. But I’ve always had a love of everything that can fly, rockets, planes, anything. I want to focus on the rockets, the NASA aspect of it.”