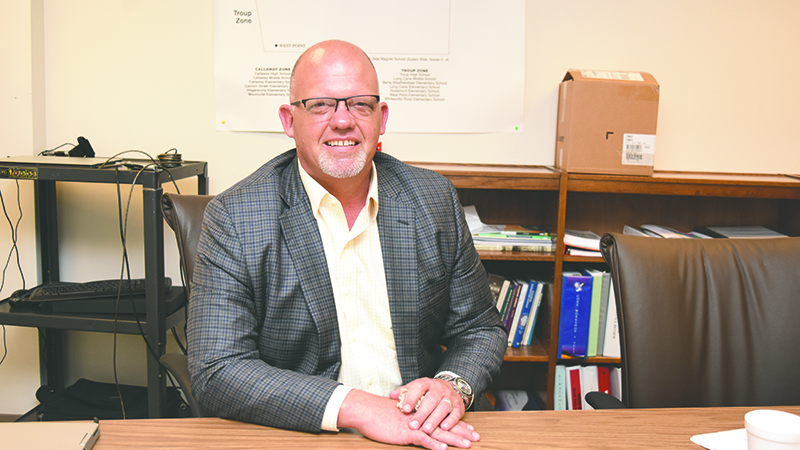 Superintendent Brian Shumate marked his first full year on the job in Troup County Wednesday, and it’s been quite a ride due to the impacts of COVID-19.

His first full school year was cut short and the school system has been unable to hold in-person graduations up to this point. Despite the challenges, he still believes the future is bright for the Troup County School System.

“After being here for a year, I’m just as excited as I was last year,” Shumate said.

Shumate said he believes strides have been taken in shifting the culture of the school district and getting everyone to buy into his vision. Since day one, he’s spoken about curricular coherence — or ensuring every school was teaching subjects in a similar way — and a place for every kid, meaning adapting the school system to meet what students need, not the other way around.

He said he keeps the larger goals in mind, even when dealing with issues that pop up throughout the weeks.

“Sometimes you can get caught up in the daily drama and forget about where you’re going,  and you’ve got to keep looking out into the future,” Shumate said. “We have to be able to operationalize this idea.”

In his first few months on the job, Shumate also spoke repeatedly about wanting to compete. He wanted to see where the Troup County School System stacked up against surrounding and similar sized school districts, so that he could see where TCSS was progressing and where work remained.

However, that’s impossible this year, as standardized testing was canceling due to the coronavirus pandemic.

Shumate said in the meantime, he can use feedback from parents about the state of the school system to judge how things are going.

He said ACT scores are embargoed right now, but he was pleasantly surprised.

TCSS gave the ACT to all juniors for free. Shumate said he wants all students to see that they have the option of college, even if they decide not to go and giving all juniors the ACT is part of that.

“Based on the trends I’ve seen nationally, we actually did pretty well, relative to what you might think when you start administering a college entrance exam score to all kids, many of which would not have taken it otherwise,” Shumate said.

At last year’s back to school event, Shumate brought every TCSS employee together for a kickoff event. He gave a speech noting the 10 goals he’d like to see accomplished, and he believes TCSS is working toward achieving all of them.

Among them were making kids the primary focus and empowering other leaders in the school system, such as principals.