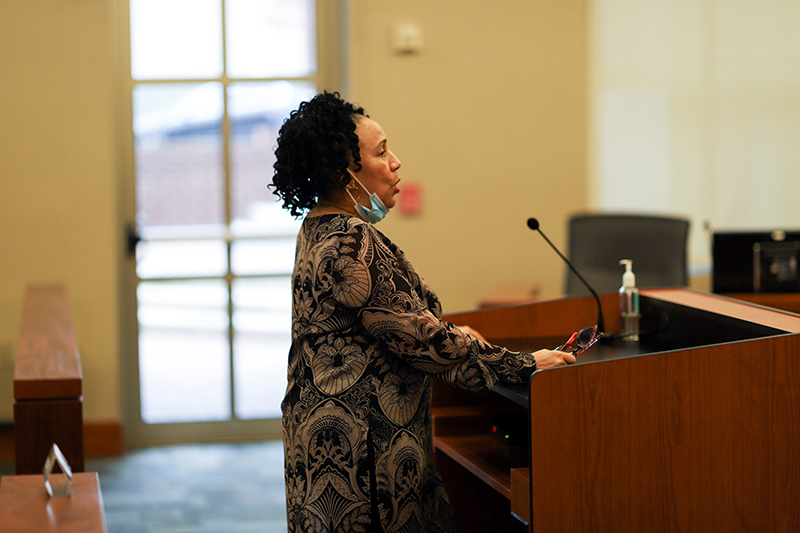 After months of back and forth discussion between St. Paul A.M.E Church and the Troup County Board of Elections, the church was approved to be a new polling place on Thursday after a two-and a half hour board of elections meeting at the Troup County Government Center.

The conversation at times became contentious before the board ultimately decided to approve the new polling place, though some steps remain to make it a reality. Currently, Hogansville’s one voting precinct is located at the Hogansville Public Library.

“I approached and had a discussion with (election supervisor) Mr. Andrew Harper back in February,” said the Rev. Frances Hunter of St. Paul A.M.E. Church. “At that time, I was told by Mr. Harper that we needed to get approval from the city of Hogansville. In May, I was speaking to Mr. Harper again about St. Paul becoming a voting precinct. He reiterated what he initially told me, which was that we needed the approval of the city of Hogansville.”

Hunter said she later found out “through some research and investigation” that the church only needed approval from the board of elections.

In a previous interview, Board of Election Chairman Bill Tatum said approval is needed by both the city and the board to create a new precinct.

“The city must approve it because it will cost them money, and they have to have the funds in their budget,” Tatum said previously. “Once the city approves it, and we have inspected the building to make sure it meets criteria to make sure it has enough parking, ADA access and everything is inclusive or if it’s storming there is shelter, then we can go from there. We will look at all the numbers and propose for redistricting. We would then vote to approve or not approve this as a second precinct.”

The church was recently inspected by the board of elections and Harper and the board said the building had no issues and provided ample space for voters and poll workers. They also determined it was ADA compliant.

Harper said that the state will have to inspect it next to get a final approval for the new polling place.

During the meeting, both the board, church staff and county attorney debated the legality of them being able to vote on a new polling place.

County Attorney Mark Degennaro said House Bill 316 was an overhaul of some of the electoral code provisions.

“If you have a change in a polling place, in other words if you were going to shut down one polling place and establish a new one, then there would be no alteration of precinct lines,” Degennaro said. “That would be subject to the 60-day requirement of the statute that says, essentially, you have to have a 60-day window to do it.”

A 30-day window is also required to notify voters of any change in precinct prior to that change taking effect.

“My husband read through that House Bill 316, as did I, and there is no specific sequence of events,” Hunter said. “And so, while the board has the ability to go ahead and approve it today, we would still be within that 60 day parameter to establish the precinct prior to the November election. They can all occur at once.”

Some board members argued the 30-day window for notification of the precinct change and the 60-day window to establish a new polling place would mean 90 days.

“Our argument is everything can happen concurrently,” said city of Hogansville Representative board member Al Prado. “Within that precinct, we are going to split it in some fashion. The voters don’t change, but they will be notified where they go.”

The church wants the polling place to be ready to go by the November election, which Degennaro and Hogansville City Mayor Bill Stankiewicz aren’t sure can happen in time. Stankiwicz said he was concerned all the legal requirements could not be completed in time

“I’m not going to participate in a circular firing squad,” Stankiewicz said. “If we do this too fast and not the correct way, we are going to have a disaster on election day. Then everyone in this room is going to look like fools.”

Stankiewicz said he was in full support of a new polling place being added at the church but was concerned on the timeliness of everything.

Prado said Friday will be 73 days from election day and that the 30/60-day window gives ample time to have the polling place approved and ready.

The board made a two-part second motion saying that Harper will have a step-by-step plan by Monday that will show how the polling place can be ready by the November election. That will also require an ad in the legal organ.

Callaway Stadium to be limited to 30 percent seating…