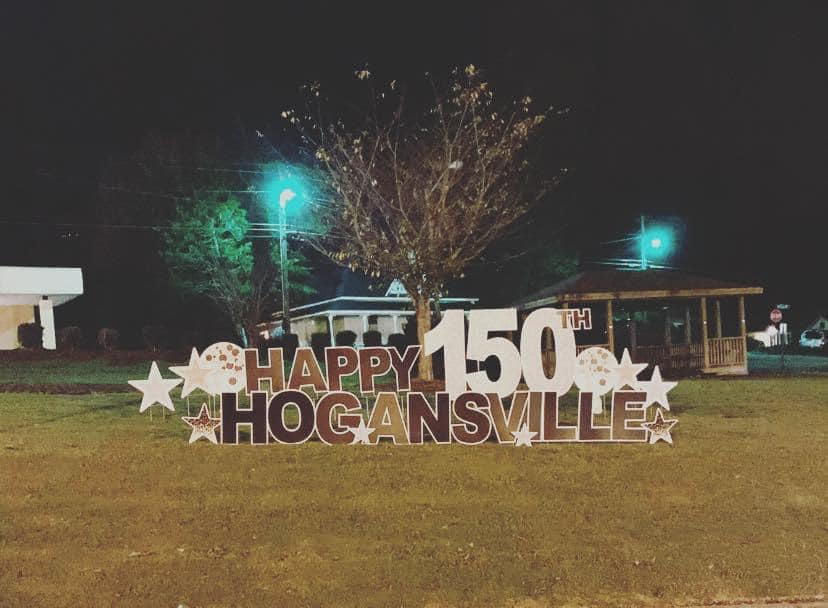 The city of Hogansville celebrated its 150th birthday on Monday.

For the past 150 days, the Hogansville Sesquicentennial Committee and Chairperson Wanda Lowe encouraged churches, businesses and individuals to purchase or make and display personalized prayer flags. The flags are meant to show unity in prayer and beauty through art, color and words throughout the city.

Hogansville Mayor Bill Stankiewicz said the city originally planned a grand celebration a few months ago for the birthday but due to COVID-19 the city decided to cancel all plans.

The city did place a ‘Happy 150th Birthday Hogansville’ sign in downtown Hogansville.

City Manager Jonathan Lynn said the sign will be there all week for locals to take a picture with.

In addition to celebrating 150 years as a city, the city recently asked for the community to help design a new logo.

“Out of the 100 or so that we’ve gotten, we are narrowing it down to 10 or 12 to present at the next council meeting,” Stankiewicz said. “About 50 submissions came from students at Callaway High School. As we shift through them though, we won’t know who submitted them to keep it fair.”

Lynn said there are a wide variety of logos to choose from.

“There were some that had variations of the same logo with different colors,” Lynn said.

“It was very unexpected to have so many from the high school. It was amazing.”

The city is expected to move into its new city hall location at the former PNC bank building.

“The city is awaiting final approval from USDA,” Lynn said. “Unfortunately, it’s out of our hands.”