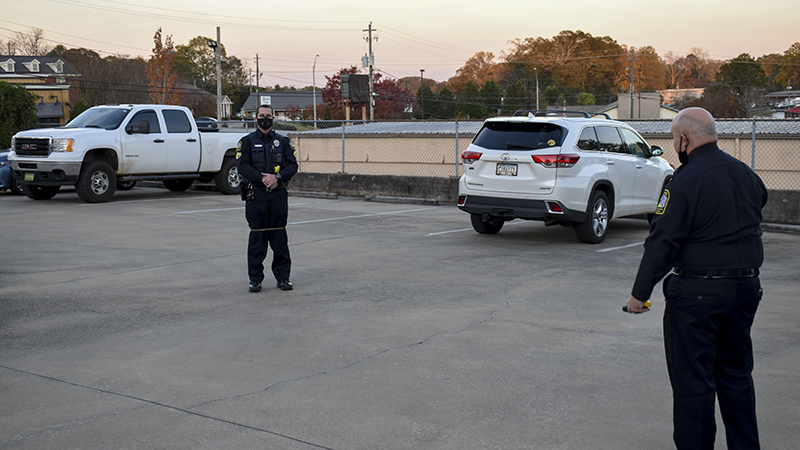 Above, Cpl. Robbie Hall, left, stands in the council chamber parking lot after a BolaWrap device was demonstrated on him by Eric Lohr.

Developed by Wrap Technologies, the BolaWrap fires an 8-foot Kevlar tether designed to wrap around and restrain a non-compliant suspect. The tether can be fired from 10 to 25 feet away and travels at 513 feet per second.

The handheld device has been sold to police departments around the country and is marketed as a device that can be used to restrain people who are intoxicated, experiencing a mental health crisis or mildly aggressive. It is intended to not rely on “pain compliance” and is considered to be on the low end of the use-of-force continuum — les lethal than mace or Tasers, for example.

Each tether has a four-pronged hook on each end and is contained in a cartridge, powered by a partial charge .380 blank.

Due to the metal hooks that pierce clothing, Cpl. Hall said he probably wouldn’t use the device on a suspect who was wearing shorts.

Hall himself was recognized by LPD Chief Lou Dekmar at the Nov. 10 council meeting for successfully using the BolaWrap.

“Recently, we had the opportunity to use the BolaWrap on an individual that was affected by mental illness, bringing them into custody so we could take them to the hospital without injury,” Dekmar said at the Nov. 10 meeting.

Hall mentioned at the meeting that the suspect was violent and had assaulted officers in the past. He said he fired the device at the suspect, wrapping up his arms, which enabled officers to take the suspect into custody without further violence.

Dekmar also spoke at that meeting about the importance of having less lethal options to restrain suspects. He noted that in a given year, LPD makes between 3,000 and 5,000 arrests and receives nearly 60,000 calls. In 2019, there were about 29 use-of-force incidents.

“It is a critical task, and one that we’ve always got to be prepared for, despite the fact that it does rarely occur, but prepared in such a way that we’re able to avoid serious injury to the individual that we’re taking into custody,” Dekmar said.

Council Member Willie Edmondson thanked Dekmar at that meeting for using the device “in light of everything that has gone on in our country this year, where people just die, mentally ill people have to die because of … officers being afraid.”

Dekmar said LPD is always looking for alternatives because of use-of-force incidents and killings by police officers that, when they come under scrutiny, “defines your community, defines your police department, and it creates a gulf between the citizens you serve and the agency that takes years to mend.”

LPD first piloted early models of the BolaWrap in 2018 and gave feedback to Wrap Technologies to help refine the design.

The cord was shortened from 12 feet to eight feet, the device was made yellow instead of black and a green laser dot was made into a flat line so that the device could be fired more accurately.