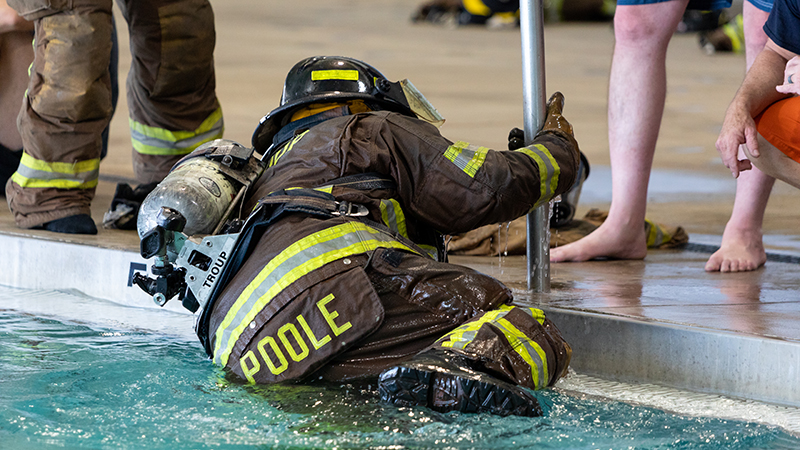 The Troup County Fire Department underwent aquatic training Thursday afternoon not only to teach the individual firefighter how to self-rescue but to also make themselves visible to a rescuer.

“This month’s training is based on firefighter survival in a very rare but more than possible environment,” said TCFD Training Officer Capt. Rusty Brown. “Troup County Fire is training on firefighter survival in the event of the fully-dressed firefighter falling into a body of water. Troup County has one of the largest lakes in the state of Georgia, along with swimming pools located at every one out of five homes within the county and some of these pools being in basements of the home. Troup County also has multiple ponds, creeks and rivers that can easily flood in a major rainstorm to cause citizens to become trapped in their homes or vehicles.”

During the training at the Mike Daniel Recreation Center pool, firefighters put on full firefighting gear, including the SCBA (self-contained breathing apparatus) along with their face piece, and had to fall into the pool. Firefighters then had to perform three separate exercises, including having to float, pull themselves out of the pool in full gear and then finally completely remove their gear while in the pool.

“Statistics show that a fully-dressed firefighter can only float for five to seven minutes prior to sinking, if performed correctly,” Brown said.

He said while walking back from the fire and noticing firefighters near the water that it would be a good idea for all of them to go through the training.

“This class builds confidence in each and every firefighter from the newest to the oldest in our department,” Brown said.

“You will never be fully confident in your gear until you’ve placed yourself in any environment that you may face in your career as a firefighter. Many of these firefighters have definitely had their concerns when this class was announced, and I truly agree with them due to the fact it is far from normal. Since this training has begun, I have had multiple individuals in this department tell me of times that they have had the concern of the ‘what if’ they were to fall in and or close calls that have occurred around bodies of water.”

Brown noted the recent house boat fire on West Point Lake was at the end of a very narrow dock that consisted of multiple firefighters on that dock in the dark fighting fire.

Brown said this was the first time the department has gone through a training like this.

“I strongly believe in this training and the dedicated firefighters in Troup County Fire Department are beginning to believe in it as well,” Brown said. “I do plan on performing this training annually from here on out for the sole purpose that I would take it personally if a catastrophic event were to happen to any of the firefighters in this department. As a firefighter, officer, or training officer, you develop a bond with each individual and always want them to be the best at their job and to go home to their families at the end of each shift.”