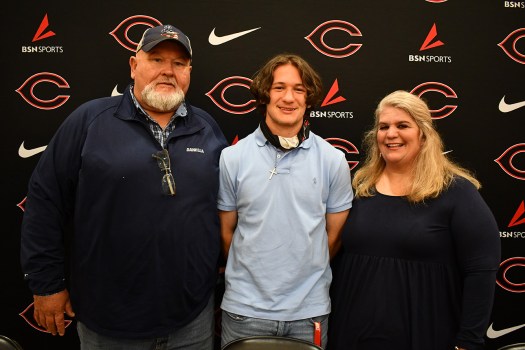 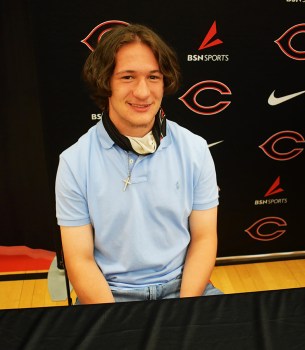 There were a lot of unknowns coming into the season for the Callaway Cavaliers.

One thing Callaway soccer coach Mike Petite had no concerns about, though, was the player manning the all-important goal-keeper position.

Petite knew that John Will White was up to the challenge, and the senior has indeed enjoyed a successful season for the Cavaliers, who finished third in Region 5-AA to advance to the state playoffs.

White’s performance as a player, and a student, hasn’t gone unnoticed.

White was recently offered a position on the Point University men’s soccer team, and he eagerly accepted.

On Thursday during a ceremony in the school’s gymnasium, White celebrated that decision with his family members, teammates, and coaches there to enjoy the moment with him.

“This is something I’ve been working toward for a long time, since I started playing for Petite when I was a freshman,” White said. “I played on (junior varsity) my freshman year, and I’ve worked my way up since then. I didn’t think this would be possible, but it worked out, it happened. I always worked for it, I never put my head down, and now I’m here.”

White, Petite noted, has a willingness to do whatever it takes to help he and his teammates succeed.

“Your desire is something I have rarely seen in a player,” Petite told White. “You want so much, and it’s not for you. It’s for the team, and it’s for the program. Your willingness to want and work is why you got this opportunity.”

White, Petite believes, has everything necessary to succeed on the soccer field.

“That work ethic, that love for team, and that willingness to give of yourself physically and emotionally, is awesome, and it’s not going to be easy to replace,” Petite said.

White is a passionate, fiery player who doesn’t hesitate to let his emotions be known, although he strives to set a positive example for his teammates.

Petite believes that having a player of White’s ability at the back end of the defense is freeing for the other players.

“The guys are so confident with him behind them, that they can go and do things that they might not normally do,” Petite said. “They know if I do this, I’ve got that guy behind me.”

White is hopeful his high-school career won’t come to a close on Friday, but it will be a tough task against Riverside Military, the number two team from Region 8-AA.

“I’m excited,” White said. “It’s going to be a challenge. I just hope we can finish it.”