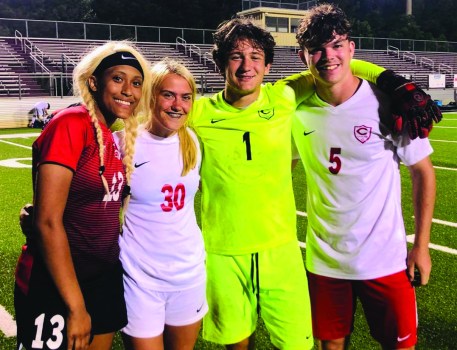 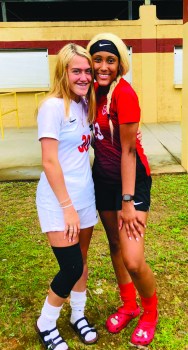 Being a member of the Callaway High soccer family has meant the world to Zyasia Jarrell, and she was thrilled to be able to represent the school one more time.

Jarrell was one of four Callaway players who participated in the Georgia Athletic Coaches Association all-star games last week in Macon.

Callaway’s other all-stars were John Will White, Blake Eubanks, and Keeley McGuffin.

White and Jarrell have graduated and are preparing for college, and Eubanks and McGuffin will be seniors for the 2022 season.

While White will continue to play soccer at Point University, Jarrell will be attending the University of West Georgia.

“Playing for Callaway has been a blessing,” Jarrell said. “The coaches, they’re awesome. I wouldn’t want to have any other coaches. They make it special. And my teammates, we’ve grown closer. To be able to play with some of them for the last time, that was really a blessing.”

Jarrell, who helped Callaway finish second in Region 5-AA last season, enjoyed the opportunity to play alongside some of the state’s best players.

“I haven’t been playing that long, so it was my first (all-star) game ever,” said Jarrell, a three-year member of the Callaway soccer team. “It gave me a chance to see how good

everybody else. It was a great time. I had fun.”

White got plenty time on the field at goal keeper, and he acquitted himself nicely.

“It was really fun,” said White, an all-region goal keeper last season. “There were a lot of guys from other schools, and it’s always an added extra bit of fun when it’s people you haven’t played with before. You’re seeing other people from other schools. Overall, it was just a really fun time.”

White enjoyed sharing the all-star experience with Eubanks, who he has known since middle school.

“Me and Blake, we’ve been teammates since we played middle-school football together,” White said. “Just to be out there on the field with him was fun. We weren’t teammates in the all-star game, but it was fun to watch him, and Keeley did really well. I think we all did a really good job representing Callaway High School. I’m going to miss both of them when I go, but we had really good years.”

Eubanks, who enjoyed an exceptional junior season and was in double digits in goals scored, said the experience “was a blast.”

“It was fun to have quality players all around me,” Eubanks added.

The coaches did their best to make sure Eubanks and all of the players got plenty of time on the field.

“They tried to spit it up equal time,” Eubanks said. “They tried to get us about 30 to 40 minutes each. I had one shot, and it got saved by the keeper.”

It was McGuffin’s second all-star experience of the summer.

As for the GACA all-star game, McGuffin said “it was really fun. I made a lot of new friends, too. It felt good being out there with other players at that level, and seeing how everybody works compared to me and how I work.”

McGuffin had an exceptional junior season, leading the team in scoring with 21 goals.

Mike Petite, Callaway’s head coach, enjoyed seeing so many soccer players from the school playing on a big stage.

“It’s good for the program,” Petite said. “It’s recognition across the state, to be able to have players at that level, going against some of the best players in the entire state.

“I think it’s really cool that our kids get recognized, and it helps our program, elevates its status.”