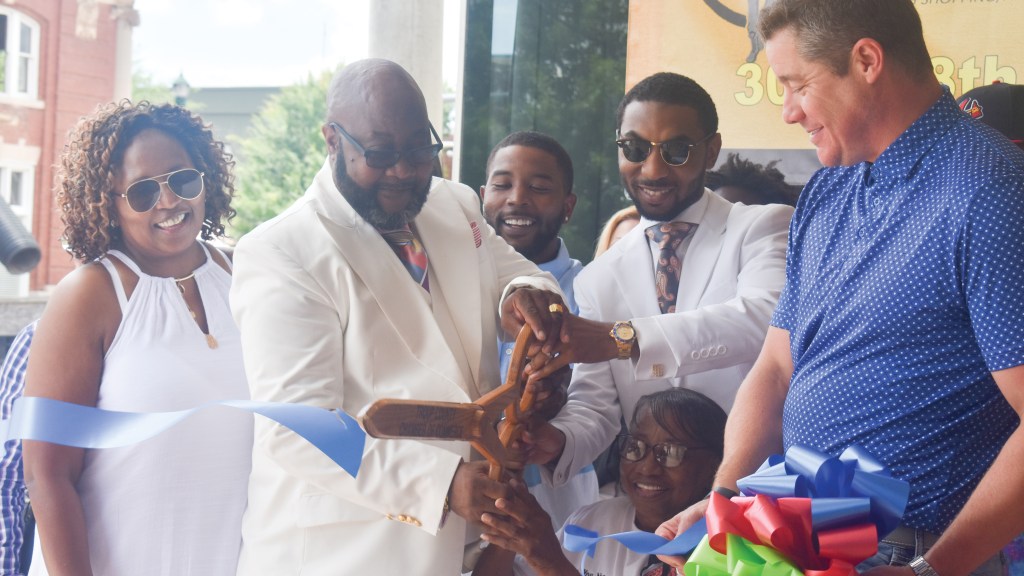 In honor of Kevin Todd: Keith Todd [second from left] cuts the ribbon establishing his new men’s clothing shop, K&K Klassic Klothing, in downtown West Point. His nephew Drae Todd (middle right) stands in for his father, Kevin Todd, whom the store is commemorated to.

Keith Todd and his twin brother Kevin Todd were taught at a very young age to always dress for success by their father, so much so that it inspired them to open their own clothing business just down the road from where they grew up.

Keith got his wish Thursday when he cut the ribbon on the new K&K Klassic Klothing in downtown West Point. The day acted as not only his and his brother’s birthday, but also a celebration of Kevin’s life.

“It was a passion of ours since our early years, about fourth or fifth grade … ever since our days of working at G Mansour’s [with our father,]” Keith said, who is also a pastor at Divine Kingdom Worship Center. “Before Kevin passed away, this is what he wanted, but we were never able to get it together. By the grace of God, we are able now to sort everything out, and look what the Lord has done.”

Kevin passed away in 2017 from kidney complications, an ailment Keith shares but has managed, he said.

In Kevin’s place was his son, Drae, dressed in one of the finer suits K&K sells. He helped cut the ribbon with his uncle.

“[My dad would say] that today is a great day to have a great day,” he said, using the quote his father would often say. “I’m happy and honored for [my uncle], and I know my dad would be proud of him.”

By their side were Keith’s own sons, Kethan and Thad, who run their own detailing business, and his wife, Gwen.

Gwen and her sons were exceptionally proud of Keith,, they said, and were thankful that they could honor him and Kevin that day particularly.

“This past year has been a dream of his … and now to see it manifest, glory be to God,” Gwen said.

“You just have to wait on him, and it’ll happen.”

K&K sells men’s clothing and accessories, including fine suit items such as tuxedos, ties, shoes and glasses. The business also shares more casual items such as pullover shirts and jeans.

While alterations are not done in the store, Keith is working with a neighboring business to add alterations to K&K’s list of services.

K&K is also set to launch its own clothing line called Klassic King Clothing in the near future, Keith said.

The business will officially open Monday.