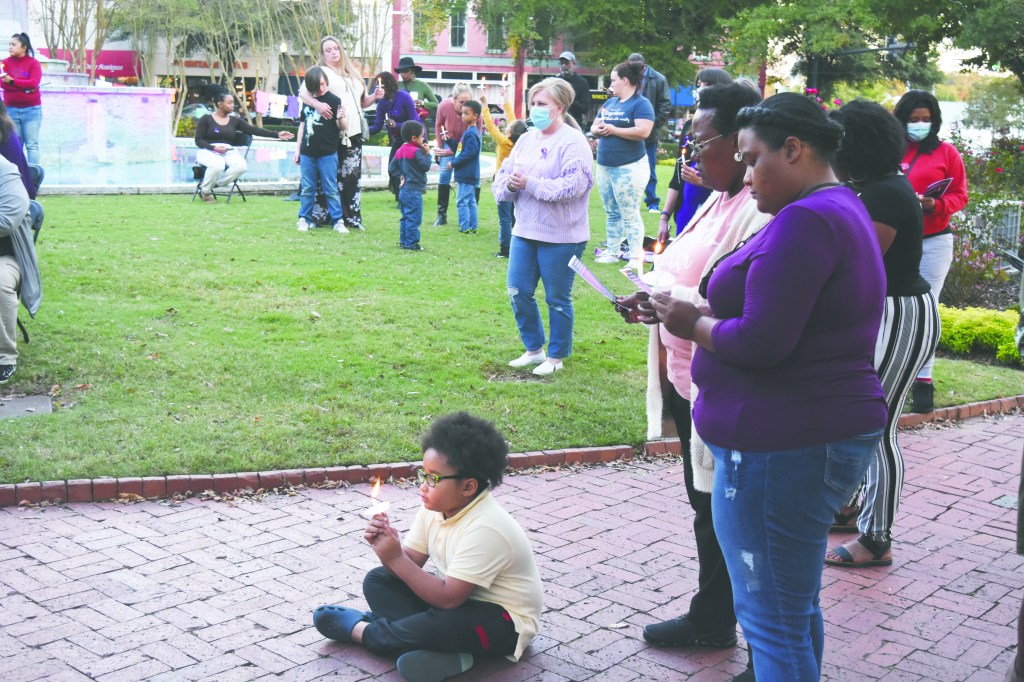 On Tuesday night, Harmony House hosted its 12th annual Domestic Violence Candlelight Vigil in Lafayette Square. Carmen Chavez and Renonda Forney, both domestic violence survivors, gave speeches on their personal experiences. Judge Wesley Leonard ended the night by reading the names of the 102 victims lost to domestic violence in or around Troup County this year.

“This year, we wanted to show that survivors aren’t just survivors, they are more than that, and what they’ve been through, doesn’t define who they are. They still have strength, they still have value,” said Margie Gantt, the Director of Victim Advocacy for State Court. “These young ladies that got up and gave their testimonies tonight show that even though you’ve been through that you can still give back to your community.”

Forney reflected on her role in the event as a survivor sharing her testimony.

“I do feel like being survivors that we have a voice now. And once upon a time, our voice was taken away,” Forney said.

Forney currently works for Harmony House as an employee and said the pandemic was felt within the organization.

“I’ve been with Harmony House as an employee for over five years. And I have not done as many protective orders as I did during the pandemic,” Forney said.

Chavez and Forney presented their speeches together and paralleled their experiences. Chavez moved from California to continue her work helping domestic violence victims. She said that the mission for her work and the event is to bring empowerment for victims.

“It’s not just staying in that role, but becoming something from that, using that voice to be empowered,” Chavez said, “So it’s more so the empowerment of a human being, especially after being labeled.”

Leonard reflected on his encounters with domestic violence and how a book signing for Clay Bryant earlier this year sparked a memory from his own childhood.

“I remember being told that someone in the house next door is doing something very bad and that we had to keep quiet. Because those children were in danger and some adult in their house did not need to know where they were,” Leonard said.

The Domestic Violence Task Force co-hosted the event and encouraged community members to sign up and join the task force.

Gantt elaborated what it would look like to be a part of the task force.

“We educate by doing lunch and learns. We do a big conference once a year. We have speakers come in, and we provide the lunch, we have different seminars and workshops on that day,” said Gant and referenced the vigil. “We do this every year. This is our 12th annual. And we just invite every stakeholder in the community to join.”