It was a late night Tuesday for many in Troup County, as many stayed up late to watch the Atlanta Braves win their first World Series title since 1995.

Some cried. Many cheered. And most are still in disbelief after watching the Braves, who have seen many great seasons end without a title, finish off an incredible turnaround after the team had a losing record at the all-star break.

Atlanta clinched the title with a 7-0 win over the Houston Astros in game 6 of the World Series Tuesday night in Houston.

Happy locals include Nancy Durand, whose grandfather, Frank Fling, a Troup County native, played a role in bringing the Braves to Atlanta from Milwaukee in 1966.

“He was the clerk of the Superior Court of Fulton County… He went and signed the papers to get the stadium built, so that they could get the Braves moved here,” Durand said.

Mackenzie Gardner, another Troup County resident and Braves fan since childhood, is now a client services coordinator for MDR Sports Management Corp and has a professional connection to the game she loves so much.

“My company negotiates contracts for our professional baseball player clients, and I manage the off the field needs of our athletes such as housing relocation, travel arrangements for families, VIP event requests, etc,” Gardner said. “Some of my earliest memories are of collecting baseball cards with my dad, so it is an extremely full circle moment that I now negotiate trading card deals for my clients.”

During her adolescence, she was one of the lucky fans to witness the 1995 World Series win in game 6 when Atlanta clinched its last World Series title.

“My memories of Game 6 in 1995 are dreamlike. I was a giddy 14-year-old baseball nut. If I didn’t have the actual ticket and a picture from that night, I may very well have wondered if it were even real,” Gardner said.

This year as the Braves advanced to the World Series, some Troup County residents, like AJ King and Patti Manion, were able to make it to World Series games in Atlanta.

“My buddy Kyle Allen and his wife, Amanda Allen, they surprised me with (a) ticket… I had no clue,” King said. “He just eventually got ahold of me. He’s like, ‘Well, I kind of want you to come here and come to the World Series me and my wife.’” 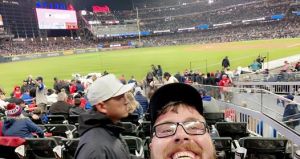 AJ King went to Game 5 on Saturday night at Truist Park as the Braves went on to win 3 to 2.

For Keeble, attending the World Series brings back memories of sharing the Braves with her late father, Wayne Keeble.

“I miss my daddy every day, but I feel closest to him when I’m at a Braves game or watching the Braves. I can’t tell you how many games he attended and how many he watched, but it was probably almost all of them,” Manion said. 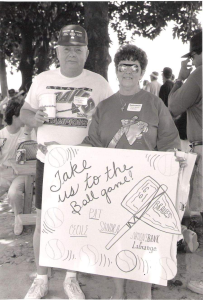 Wayne Keeble and his wife were life long Braves fans and rarely missed the opportunity to see them play.

It was the Braves and her love for them that inspired Manion after she retired to visit every stadium and see the team play.

“I want to see the Braves play in every stadium. So, we went to Philadelphia in Toronto that summer (of 2019),” Manion said. “People have different desires of things that they want to do after they retire. For me, because of my love for the Braves, that was my bucket list.”

Even residents that did not make it out to the game were glued to their televisions throughout the series. Bobbi Harrington said that it was a family affair at her house and that superstition led to some members not getting to watch.

“It may sound silly. We kicked my son-in-law out because he was bringing zero energy to the room. And when we kicked him out, then they won the third game,” Harrington said. “So, we told him he wasn’t allowed back if he was going to sleep in the chair and not watch the ballgame. We’re really superstitious.”

For some couples, the Braves are a large part of their relationship. Josh Vann proposed to his wife, Rebecca, at Turner field.

“We actually established our relationship when we first started dating through the Braves… So, when I decided that Rebecca was going to be my wife and I was going to ask her to marry me, I couldn’t find a better way to do it than (at) Turner Field,” Vann said. “I came up with a plan. I talked to some people and asked her at the top of Turner Field to marry me and she said yes.”

Caitlyn Flanagan convinced her now husband, a diehard Reds fan, to take their engagement photos at a baseball field since they both shared a love for a sport. Their photographer helped make Flanagan’s wildest dreams come true when they were able to arrange the photos to be taken at Turner field. 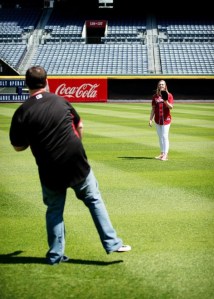 Caitlyn Flanagan and her now husband were able to play catch on Turner Field for their engagement photos.

Some Braves fans show unique ways of celebrating their fandom. Harrington has a tattoo of the Braves “A” on her left arm.

“It’s on my left arm, so that I can chop, and I don’t even have to have a tomahawk,” Harrington said. 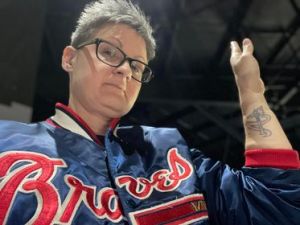 Bobbi Harrington shows off her tattoo at an Atlanta Braves game.

Penny Hood, a teacher in Heard County, keeps an array of memorabilia in her home and classroom that includes bobbleheads, posters, cards and books on the history of the Braves. She said her students regularly look at the collection when entering her classroom.

“They like to look at it. Some kids just like to stand and stare. They didn’t know all those were Braves people because most of them have not been fans that long,” Hood said. “So, they don’t know about all the history.”

Hood has collected more than 60 bobbleheads in 10 years.  Her personal favorites are from when Bobby Cox retired and when Freddie Freeman and Chipper Jones rode a four-wheeler through a 2014 winter storm. 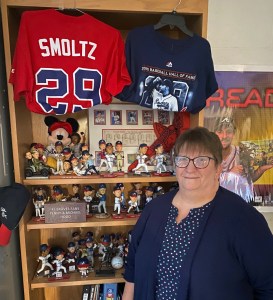 Penny Hood amassed over 60 bobble heads in her 10 years collecting and showcases them at her school.

“The year Bobby Cox retired, we got posters, and they’ve got the bobblehead of him being carried off on the shoulders of players,” Hood said. “Then, another one I like is the one where Freddie Freeman was on the back of Chipper’s four-wheeler in the ice storm and nobody could get home.”

No matter where fans were on Tuesday night, celebrations ensued. King celebrated at Main Street Pub with local fans.

“Everyone freaked out, jumped up and down, screaming, hugging,” King said. “I’m going to be honest, I teared up. A lot of other grown men teared up. We’ve been through a lot with the Braves.”