WATCH: Tyrone Poole give back to his hometown, LaGrange, this holiday season

A line formed outside of the old Canon Street Elementary school on Thursday as community members waited for the doors to open so they could receive a holiday meal from Tyrone Poole and his foundation. The event intended to last two hours, but the organizers were out of food within 30 minutes of opening to the public.

Tyrone, a LaGrange native and two-time Super Bowl champion, said he considered opening the doors early when he saw the line outside.

When asked how he felt about the success of the event, Poole said it ranked among his memories of his kids being born and his Super Bowl championships.

“This is almost as close to winning those two Super Bowls with the Patriots, being drafted in the NFL, or having my kids,” Tyrone said.

“This is something to see people, put a smile on their face and [see] how thankful they are. That’s what it’s about. We’re blessed to be a blessing.” 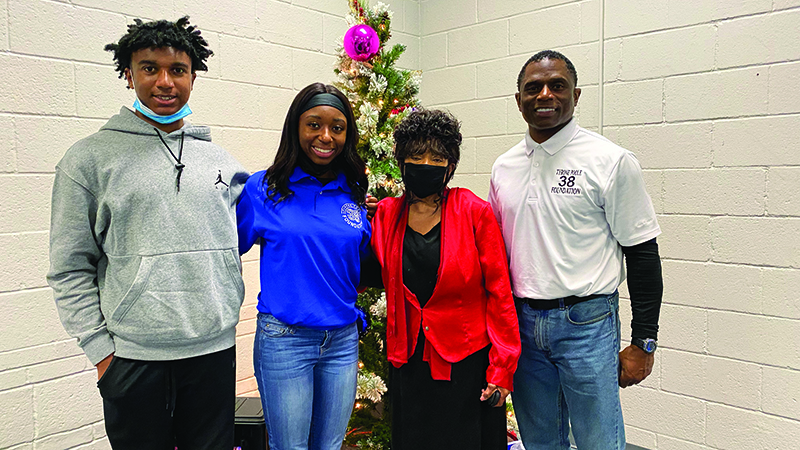 Poole posed with two of his children and his mother at the giveaway on Thursday. (Photo/Iris Hersey)

Tyrone’s mother, Rosemary, attended this year’s event and said she thanked God and that all glory goes to him.

“I always send up my blessings to the Lord for it to be a blessed occasion, no matter what it is. It’s not all about the food,” Rosemary said. “It’s all about what he has done. That was what he gave us, the gift that we have from him. That’s what is so precious.”

Tyra Poole, Tyrone’s daughter, said she felt blessed to be able to come to LaGrange and give back to her father’s hometown.

“All I can really say is that it’s a blessing coming back to my dad’s community and  [to] help people in need,” Tyra said.

Tyrone said he will come back next year during the holidays to give out more food. He said he plans to bring more than he did this year.

“People talking about ‘hey, I remember you when you were little to nothing.’ It’s good to hear stories of my past and also to see the present young people because we had young people helping out too.”

Tyrone said he does this event due to the love he has for LaGrange and because he wants to help its’ citizens.

“We are going to come back next year, this is something annually we do. This is my hometown. I love my hometown. I’m just trying to make sure I keep planting seeds, so everybody has an opportunity to have success,” Poole said.