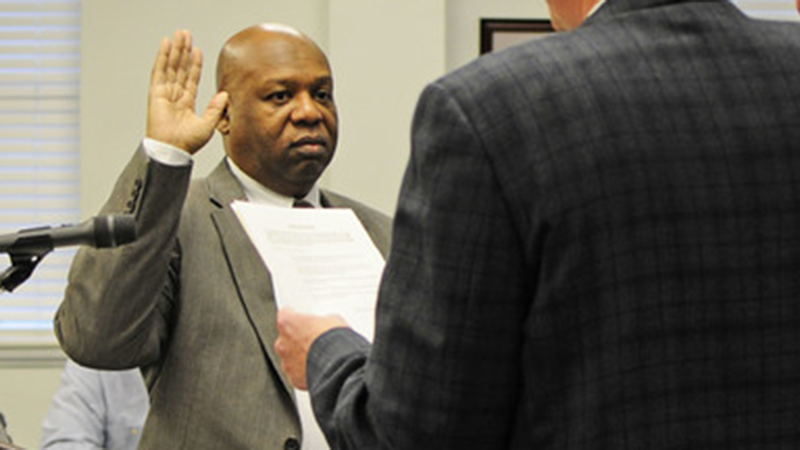 The sudden passing of LaGrange District 2 City Councilmember LeGree McCamey is sitting heavily on the hearts and minds of his fellow councilmembers, church members and family members, but those who are grieving for him also remember the love he had for his community.

McCamey died Thursday morning at Wellstar West Georgia Medical Center. He was 63 and served on the LaGrange City Council for 14 years. He also served the Minister of Music at the Fannin St. First Baptist Church for 37 years and, as noted by his family, worked as a lifelong community advocate.

LeGree was born and raised in LaGrange and was the youngest of 11 children.

His older sister, Freeman Johnnie, a reverend at the Fannin St. First Baptist Church, said he was mischievous as a child and prone to a harmless prank or two.

She recalled that he attempted to change his name while in grade-school.

“Once, I think he was in the first grade, he decided he was going to change his name from LeGree to Gregory,” she recalled. “He didn’t have a mean spirit. He was always a giving person.”

Most notable of all, Johnnie said he had a passion for music that surpassed age or skill.

“He always had that music gift, even when he was two, three years old,” she said.

One of his favorite musicians as a child was Chuck Berry, Johnnie recalled. When he was only three, he would bring in a red rocking chair from his room to play music on the family’s stereo to sing along with. He also would play on the family’s piano alongside his other musically-talented brother, Kenneth McCamey and dance along with his favorite songs.

“As he grew, he was singing all the time,” Johnnie said. “My mother asked him, ‘can’t you just be quiet?’ and he started singing that much louder.”

LeGree attended LaGrange High School, where he put his talent for music and dance to work in the school’s Drama Club and Thespian Troupe. He was captured in a photo alongside his club members in a 1976 LaGrange High School yearbook where his theatrical endeavors were overseen by Cheris English, the wife of former County Commissioner Richard English, Jr., who served as a county commissioner for 43 years.

LeGree’s brother, Kenneth McCamey, who was only 11 months older than him, said their musical passions were intertwined, and they played together often at church. However, he said LeGree was superior-talent wise.

Kenneth recalled how LeGree’s musical talent outstaged his own at one point.

“Once, when I returned from the Navy, and he sat down at the piano and you thought it was Liberace playing,” Kenneth said. “He wanted me to sit down and play with him and I said, ‘man, you must be crazy.”

LeGree balanced his love of music with a fondness for cooking, Kenneth said.

“He was a good cook, and he loved to cook but his tastes were a bit too fancy for me,” he said. “He’d watch all those food channels and get all those recipes.”

Johnnie added that she took a fish dinners to him on Friday.

With his music degree, he became the minister of music at First Baptist Church on Fannin Street and an assistant conductor for the Sons of LaFayette. In 1994, LeGree composed and recorded the West Georgia Regional United Way Theme Song, “Reach Out.”

In 2008, he performed as part of the cast of the LaGrange Opera Theatre’s production of Gilbert & Sullivan’s The Gondoliers.

LeGree first took his position as a city council member in 2007. Johnnie said he pursued politics as a way to continue to helping others.

“We were brought up with [the mentality] that it was better to give than to receive, and he took that to heart,” she said. “He found joy in serving people, not just by sitting on the council but by actually trying to help people and make LaGrange a better place for everybody.”

Norma Tucker, a former city council member, served her three terms by his side and still regards him with the highest respect. She said he, along with councilmember W.T. Edmondson, were her “partners in crime” and that every moment with them was an adventure, and anytime there was an instrument or a musical moment, he was part of it.

Tucker recalled when she and other councilmembers were visiting Carrollton to explore a Marriott Hotel prior to the construction on the one in downtown LaGrange.

“We came through the [entertainment] center at the hotel, and they had this beautiful piano right there at the lobby,” she said. “He sat down at the piano, and he started to play and sing and everyone, the ticket takers, the box officer personnel, came out and started cheering. A lot of people saw his quiet, smooth, debonair side, but I was blessed I got to see the silly [part] of him.”

In recent years, LeGree was honored as the grand marshal for the city’s Martin Luther King Day Parade in 2016, a parade with the theme, ‘Lift Every Voice.’ On that, he is quoted as having said, “In music, everyone can do something. They might not be a singer, but they can hit a tambourine or play sticks, or hit wood blocks. We need to be engaging each person not only as a spectator but a participant.”

At the 2021 Christmas Parade in downtown LaGrange, LeGree rode a 1957 Chevrolet Bel Air alongside his cousin, Commissioner Jimmy McCamey.

“We had the time of our lives,” Jimmy recalled. “We sat up all night talking about that ride and about all the people who came out in the community who came together for Christmas, even during a tough time. He was big on bringing the community together, and that night, people of all walks of life came together.”

The day before LeGree passed away, Jimmy talked to him on the phone. He said LeGree gave him no indication that he was sick or otherwise having a bad day.

“We were talking about going to a meeting in downtown [Friday,]” he said. “We were going to talk with some of the legislatures about some of the issues … like the widening of Hamilton Road and the issues on I-85. This morning, when I was at the meeting, it came up on the agenda and I was like, ‘wow, he isn’t here to hear this.’”

Johnnie said LeGree had kidney complications related to diabetes and that he was in the process of undergoing at-home dialysis. She said he was diagnosed with diabetes approximately three years ago and was managing his condition with diet and exercise. Overall, LeGree never complained of his health, she said.

“During the last conversation I had with him, he said he was feeling OK,” she said.

“When I took him his fish this past Friday, he said he felt good. That was just the way he was. He never complained. The thing he always did when he hung up the phone was that he would say, ‘goodbye for now.’”

The family is planning to hold a funeral service on Saturday, Jan. 29, at Southview Cemetery, 1 p.m.