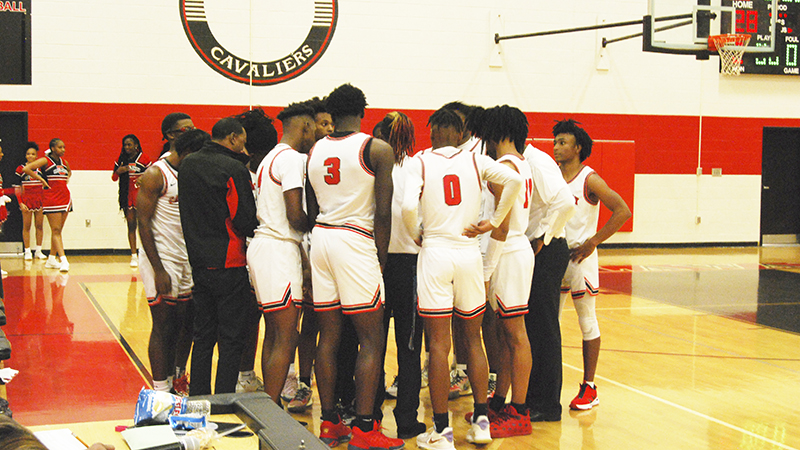 HOGANSVILLE — The Callaway Cavaliers escaped with a 35-34 win in a nail-biter over the Temple Tigers Friday night.

Cavaliers senior forward Cameron Smith sank two clutch free throws to give Callaway the lead with just four seconds on the clock. It was redemption for Smith, who missed two free throws with 1:21 left to go in the game with a chance to put his team up by three.

Temple capitalized after the two missed free throws to go up by one with only 12 seconds on the clock.

When Smith stepped to the line with the game in the balance, he was only 1-for-6 on free throws. His third free throw of the night sent the crowd into an absolute frenzy.

What makes it even sweeter for Smith is he was able to do it in front of his friends and family on senior spotlight night.

Callaway coach Andre Johnson praised Smith after the game, “He’s our senior leader, he is the leader of the team this year. He’s not afraid to put the team on his back.”

When the clock hit zero, the Callaway student section rushed the court to celebrate a huge win with the players.

The largest lead in the first half by either team was three points, and the largest in the game was a four point lead by the Cavaliers with 3:58 left to go in the fourth quarter.

The two teams battled back and forth for the lead with the Tigers taking a 17-14 lead into the half.

After beating Temple by 13 points just a few weeks ago, the Tigers came to Hogansville with thoughts of revenge and a chance to tarnish the Cavaliers perfect 4-0 region record, but it was not to be.

This game was even more of a defensive struggle than the Cavaliers 46-33 victory at Temple earlier this season. Johnson was hot after his team struggled to an 8-8 tie at the end of the first quarter. After a player spoke up in the huddle, Johnson could be heard yelling no excuses at his boys, but overall he was happy with his team’s effort.

“Honestly I feel like they figure out how to put it together and play defense at the end and make it count,” Johnson said.

It was a team effort for Johnson’s team as no player scored in double figures. Sophomore guard DeShun Coleman led Callaway with nine points.

The Cavaliers moved to 13-5 overall and 5-0 in the region, keeping the top spot in the region. Callaway’s next game is away at Haralson County on Feb. 1.