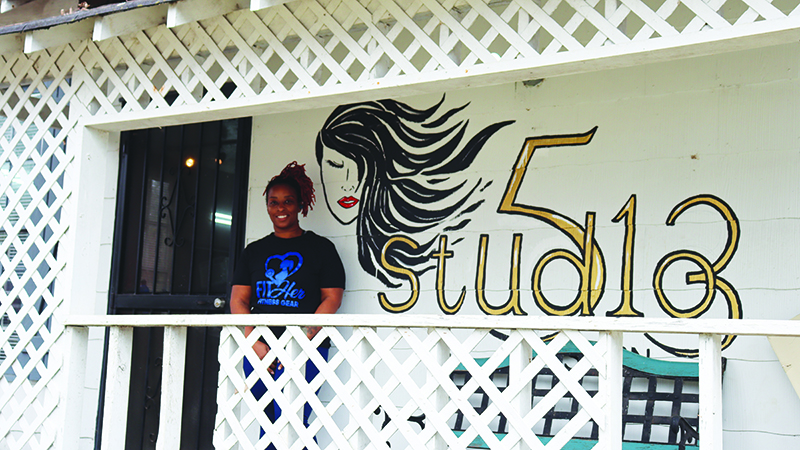 Bre’Tarsha Harris posed for a picture in front of Studio 513, her salon on Miller Street. The salon is her first business, but she now owns two. The other is related to her fitness journey. (Photo/Iris Hersey)

If you were to see Bre’Tarsha Harris around LaGrange, you would probably find her in workout clothes as she walks around town. However, if you were looking for her during work hours, she would most likely be at her salon Studio 513. The salon and her fitness business are her two passion projects, ones she openly shares with the community.

Harris said hair has always been a talent of hers, a talent that her family and friends always acknowledged growing up.

“My business, I would say, was founded by childhood struggles. My salon business is a gift from God. I was born with the talent to do hair,” Harris said. “At the age of 12, I was doing my hair, my mom’s hair, [my] sister and her friends. It kind of just trickled to everyone. Everyone knew that this was a talent.”

Harris is also the first to acknowledge that it was not an easy road to owning her own salon, which turns seven years old this March.

“By the time I was 20, I had two kids. I now have three. At that point, I had grown so much on my own. I still struggle because I was a drop out, so I didn’t finish school. I had to go back,” she said.

Harris said she happened upon her storefront during her weight loss journey and knew it was meant to be the location of her salon.

“This salon was founded actually on my journey of weight loss. It was a part of my three mile walk. I passed it one day, and I could tell someone had moved out of it. There was no sign up,” she said.

“I kept walking and I kept walking. At that point, I felt like God was just telling me to keep watching on that building like that’s your location.”

Harris said it was not in great condition seven years ago, but she has slowly worked on it over the years. The salon now features purple and green colors instead of what it originally had.

“It was a complete dump, but I had visions,” she said. “A friend of mine, she came in and we cleaned, we scrubbed. What you see now is phase three.”

Her favorite part of the salon, she said, is the shampoo room, which just recently got updated. 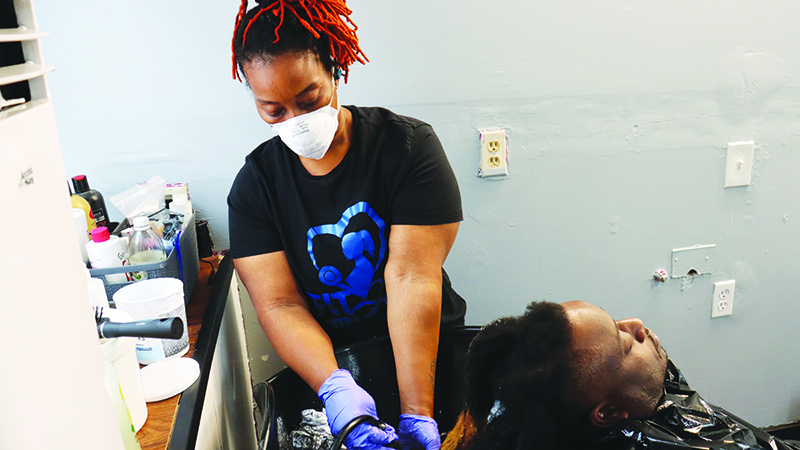 Above, Bre’Tarsha Harris worked on bleaching a client’s hair before adding in color. (Photo/Iris Hersey)

“It’s going to be my shampoo room now because I have a new sink,” she said. “I’ll try and find some old pictures of the old setup, then you’ll understand why I’m so proud of the new setup.”

“With that, I have grown to fall in love with my plants because I bought it in a small cup and it has grown,” she said. “Anytime my plant is looking like it’s dying, I pay close attention to it and nurture it more because to me right now it represents my business.”

Harris said if she had to choose a favorite moment to work, it would be Saturday mornings because that is when Sister Tammy comes in.

Harris said anyone that books an appointment on Saturdays is in for a real treat.

Harris said if anyone is interested in her services, the best way to reach her is via Facebook where you can learn how to book an appointment and stay up to date with her business.