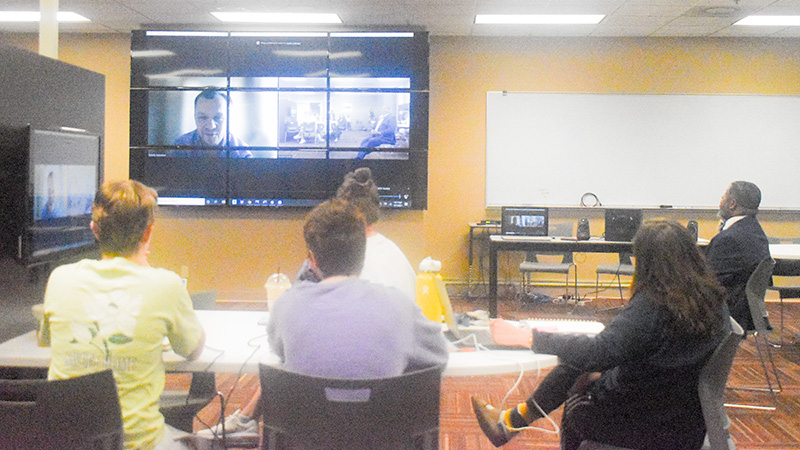 Dr. Tymofiy Mylovanov, president of the Kyiv School of Economics in Ukraine and an economics professor at the University of Pittsburgh, said he sensed the impending war in Ukraine prior to its instigation. A week before the war officially began, he asked his students to share scenarios on if the war happened and what the future would look like.

“I still haven’t graded them,” Mylovanov said over a month later via Zoom to Dr. Preston James’ LaGrange College Sports Marketing and Event Management class. “Maybe after the war, I’ll grade them,” he said.

Mylovanov has witnessed the effects of Russia’s invasion of Ukraine firsthand — working within a war zone to bring needed medical supplies to the country. For the past several weeks, he has been fundraising for medical kits in Ukraine over the last several weeks at his base in Lviv, a city in western Ukraine.

In his half-hour commentary, Mylovanov described how Ukraine quite literally changed in a day.

“I arrived on Sunday. On Thursday, there was an invasion,” he said. “It quite literally changed in one day.”

With the concept of war ahead, Mylovanov traveled to Kyiv, Ukraine’s capital city, to meet his family. When he arrived in Ukraine, exhausted from jet lag and anxiety of the situation, the loud bang he heard that night was easily mistakable.

“I thought it was my upstairs neighbor moving furniture around and something fell down,” he recalled.

“And then my phone is going off … and everyone is saying there’s an attack. It’s nuts because the last time [Kyiv] was attacked … it was in 1941. We thought if Russia did something, they would [attack] in the east of Ukraine. It was written it could happen, but we didn’t believe it.”

Finding information about the war was also a challenge, Mylovanov noted. He checked websites and even local news stations for updates, but there was nothing available. He then turned to social media for answers.

“It’s a total mess in there,” he said, noting how many users were denying war had broken out. “Nobody knows what’s going on [or] what to do. Should I stay, should I leave?”

James’ students, who have been learning about social media and its economic impacts, asked Mylovanov about the economic factors he has faced in the past month, particularly how he was able to find necessities like fuel as he and other evacuees left Kyiv.

Mylovanov and his family decided to travel to his sister’s home, a trip that took close to seven hours with excessive traffic caused by other evacuees. As soon as the war broke out, nearly 4 million Kyiv residents were running to gas stations to fill up their cars. Some waited as long as 10-hours in line. Many were met with vacant stations already out of fuel. Some stations were reserving fuel for law enforcement and military personnel. Marshal law was more or less in motion at this point, Mylovanov said.

Some were so desperate for fuel that they would pay the people before them “thousands of dollars” for their fuel. Price surges ensured that a tank of gas could cost as much as $500.

Those who didn’t make it to the pumps in time had no choice but to abandon their cars and make the trip by foot.

All the while, military jets were flying overhead.

“You don’t know whether their [Ukraine’s or Russia’s],” Mylovanov said. “Are they going to shoot or bomb [around] me?”

Mylovanov was eventually able to find out that the country was teetering on a military installation and Russians had 34 attack helicopters poised at Ukraine.

Mylovanov’s family was at its wits-end with the news, many still in denial of the situation, he recalled. His own mother tried to go to her job at a Kyiv hospital.

Mylovanov joined the war efforts from afar by fundraising for medical kits through the Kyiv School of Economics website.  The medical kits are being sent directly to the war’s frontlines, he said, assisting injured civilians and fighters. He said he has helped raise $12 million so far.

James’ students are joining in on the efforts now. The sports management department uses social media platforms to sell tickets to different sporting events, the money of which goes toward the department. Now, the social media accounts will be used to redirect traffic to Dr. Mylovanov’s fundraiser, James said.

“We discuss all the time about being global citizens, [and this] is a way we can help,” James said.

“This is a travesty going on across the world, but it still affects us, not with just gas prices. I thought to myself what if that happened in Atlanta? I’m trying to show them the tools that they’re learning to market a sporting event can be used to help somebody else as well too,” James said.

To donate, visit the Kyiv School of Economics site: https://kse.ua/support/donation/