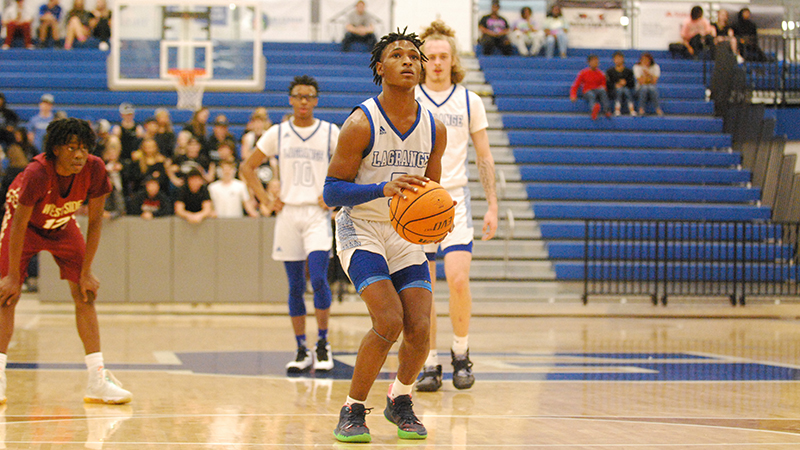 Jakobe “Kobe” Jones has been named to the GACA All-State team for the second straight season. Jones is the starting point guard for LaGrange High School basketball team.

“Being an All-State player is a great goal accomplishment and it’s a great feeling to be noticed around the state and named one of the best players,” Jones said. “I’ve made it my junior and senior year. I was happy but still humble because I have more goals to achieve.”

Jones started his basketball career as a six-year-old in Charlotte, North Carolina but has found a home in LaGrange.

“Being a Granger means a lot, a winning tradition, student-athlete, and being coachable,” he said. “Being a part of the team is a great feeling. Being around your best friends every day, learning and working hard every day and the best part is winning together and learning from your coaches.”

Jones is a menace on the court with his ability to penetrate the lane quickly and turn on a dime, but what separates him from his peers is his ability to read the game.

“My court vision and being a team leader has improved the most,” Jones said. “Starting all four years and being a captain, you learn a lot over the years.”

Despite the fact that he has made All-State teams two years running, Jones still sees a need to improve his game.

“I still have to grow with my decision making, limit turnovers, shooting and getting more explosive,” he said.

Jones will never be the tallest player on the court and has not cracked six foot yet. Despite this, he plays with the heart and skills of somebody much larger in size. He also carries the quote “Although in stature I may be the shortest on the court, by the end of the game they’ll think I was the tallest” around with him whenever he takes the court.

The coaches at LaGrange High School have pushed all the right buttons with Jones and have helped him unlock his potential for the Grangers.

“I’ve been training with coach B(ernard) before I got to LaGrange High School when I was in middle school he taught me a lot of different moves, how to master the pick and roll, shooting, etc.” he said. “Coach Veal is the best coach you could play for. It’s hard to come to a high school and start as a freshman, and I thank him for trusting me to be his starting point guard all four years.”

Jones loves playing in front of the Grangers student section affectionately known as the Blue Crew.

“The Blue Crew is the best student section you could ask for,” he said. “Every game they are going to be loud, it doesn’t matter if the games are away, they are coming.”

What fuels an All-State player like Jones? Waffle House, where he gets sausage, eggs and cheese on Texas Toast and hash browns smothered in ham and cheese. The other thing fueling Jones is NBA Youngboy blaring through his headphones.

Outside of basketball, he has his own clothing line “Protected” where he makes hoodies, shirts and shorts.

Jones is a star athlete at LaGrange, but is so much more than that. Just last week he took part in Special Night-Building Community where he assisted exceptional education students fulfill their dreams of playing basketball. He helped facilitate the game and was beaming a smile from ear to ear every time his temporary teammates scored a basket.