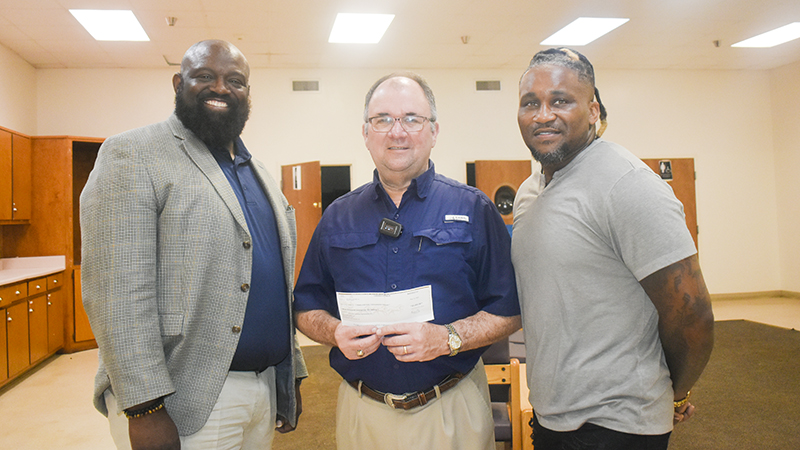 The Troup County Homeless Coalition is able to continue a long-awaited homelessness transition project thanks to a recent project.

On Saturday, the coalition, with help from Troup County Commissioner Jimmy McCamey and $1 Thursday founder Anthony Talley hosted a classic car/bike show in downtown LaGrange. The primary goal, he said, was to raise money for the coalition’s community efforts. A secondary goal was to raise funds for the National MS Society.

The event garnered $5,000 for the Homeless Coalition and will be used to help kick start an emergency shelter/ transitional housing project in the Troup County Community.

“We talk a lot about the individuals who are homeless here in our city,” McCamey said. “We have conversations, but we hardly ever put things together to raise funds.”

Mike Wilson, CEO of New Ventures said the funds raised from the car show specifically will be used to hire an executive director to coordinate the new shelter’s operation, which will be up and operational in a few months.

McCamey had a $5,000 goal in mind. With the $25 participating fee for the show and individual donations, the Homeless Coalition reach nearly $4,500 just before the event’s end.

“We started [planning the event] six weeks [ago] and we reached out to our friends in Alabama, Tennessee and throughout Georgia, and many people started sending money,” he said.

Talley sponsored the event and used his charity platform to bring in several hundred dollars, hoping to raise $500 more.  A final donation brought him to that goal just at the event’s end, he said.

In the winter months, the Homeless Coalition hosts an overnight warming center at the New Ventures building on Fort Drive where the homeless population can sleep and receive a meal. While the center has been a strong, ongoing necessity for over eight years now, it has ultimately been a stopgap measure to alleviate the homelessness issue, Wilson said.

“When it’s 90 degrees, it’s just as miserable as when it’s 30 degrees,” he said. “We’ve had a vision for some time to turn the New Ventures building into an assessment center with a three-fold purpose.”

The first fold of this new project involves setting up an emergency shelter for the homeless population. The second includes setting up an assessment center where law enforcement officers who may be in contact with an individual dealing with homelessness, or even a domestic violence situation, bring the individual in for assistance.

“The assessment center would bring them into one place and get them those services and get them assimilated with the right group,” Wilson said.

The last — and most prominent aspect of the project, Wilson said—is the project’s transitional housing plans.

Wilson said one of the hardest issues the homeless face is stable housing. Many homeless individuals may find temporary shelter in hotel rooms but may have issues keeping jobs when they can no longer stay at these hotels.

Wilson said there had been plans to construct this transitional housing at the Fort Drive location, but the fire marshal John Thomas suggested the former Pathways Second Season building on Gordon Commercial Drive, which has been unoccupied for several years.

“It was already outfitted for exactly what we wanted to do,” Wilson said. “I feel like God had a hand in all of it because it all transpired and happened within about a week.”

The building is laid out in two pods, which will provide transitional housing for 24 individuals in total, 12 in each pod. During their stay, individuals will participate in Circles of Troup County, which addresses poverty needs in the community.

Individuals involved with transitional housing will be required to pay a small amount of rent. However the rent will be returned to them after six months so they can pay for their own apartment, Wilson said.

Individuals will have access to work-based training and budgeting classes to further help them transition out of homelessness.

The building will be able to contain at least 30 individuals at one time through its emergency shelter component.

While the building needs tile repairs, carpet and flooring repairs and a fresh coat of paint, it’s in otherwise stable condition, Wilson said.

The warming center will relocate and open at the Gordon Commercial Drive location next year.