LaGrange College beat N.C. Wesleyan in game one and are now one win from the NCAA Division III national tournament 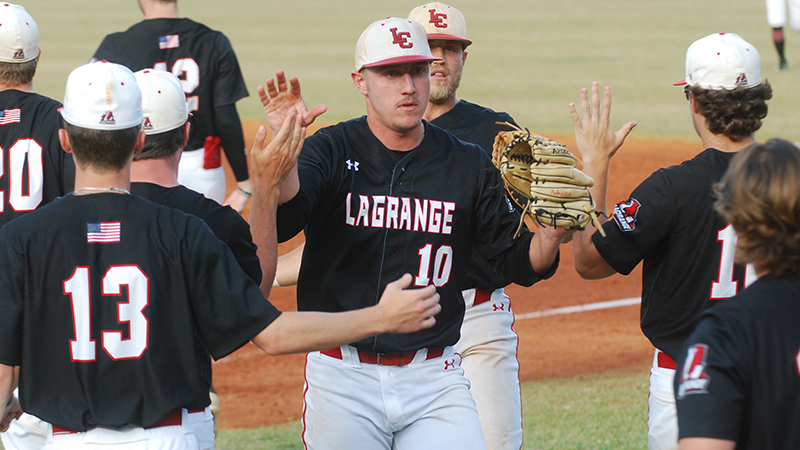 LaGrange College earned a 4-1 win in the first game of the USA South conference championship series versus North Carolina Wesleyan University on Friday. The winner of the three-game series will advance to the D III national tournament with seven other baseball programs from around the country.

Baley Coleman was the star of the show for the Panthers as he pitched eight innings and only allowed seven hits and one earned run on eight strikeouts. This win improved his record to 9-1 on the season.

“I was feeling good out there,” Coleman said. “I look forward to these Friday night starts, especially in a big spot.”

“Baley Coleman set the tone,” head coach David Kelton said. “He was unbelievable today and we extended him out longer than we normally have.”

Coleman usually goes about six innings in most of his starts this season. By inning seven and eight, he was locked in a zone. Coleman pounded the strike zone all night and the Wesleyan batters could not keep up.

“When I got past the sixth, I think the juices started flowing, and I felt like I could go the seventh and eighth,” Coleman said. “I trust my catcher, and the guys behind me, and they trust me.”

Coleman being able to go eight innings means that the Panthers were able to save some of their bullpen arms for game two and a potential game three on Saturday.

The Panthers took the lead in the second inning and never looked back. Jared Aldridge got the scoring started in the bottom of the second with an RBI single to give the Panthers a 1-0 lead.

The Panthers added another run to their lead in the bottom of the third when Cael Chatham hit a two out RBI double to give the Panthers a 2-0 lead.

“Chatham getting that two out RBI double was huge,” Kelton said. “Our guys really grinded tonight.”

David Smigelski delivered an RBI double in the bottom of the fifth to stretch out the Panthers lead to three runs. Smigelski had the best day from the plate for LaGrange College as he went 2-for-3 with an RBI, a run scored, and a walk.

“He was clutch,” Kelton said. “His doubles were big for us.”

Wesleyan chipped into the Panthers lead when it scored a run in the top of the sixth, but the Panthers were able to stretch their lead back to three runs in the bottom of the eight. Gabriel Pallo made it home on a throwing error to round out the scoring in the game.

Jack Layrisson — a senior and one of the best hitters in program history — had himself a good day from the plate as he went 2-for-4 with two runs scored. Pallo had the only other multi-hit game for the Panthers besides Layrisson and Smigelski as he went 2-for-4 and scored the insurance run late in the game. Chatham and Aldride both went 1-for-4 with an RBI. Rhett Herbert went 1-for-3 to round out the offense for LaGrange College.

Jacon Brown came into the game in the ninth inning for Coleman and earned a save as he struck out three straight batters to end the game.

The Panthers will play game two of the series on Saturday at 2 p.m. with Dalton Brooks getting the start on the mound and a potential game three later that day at 5:30 p.m. with the winner advancing to the national tournament in Cedar Rapids, Iowa.

“If we do what we’re supposed to do, then we’ll win and advance,” Kelton said. “We have to stay focused and pitch well and get timely hits and if we do those things like we usually do we’ll be fine.”

LCS hosts last spring practice as they prepare for…