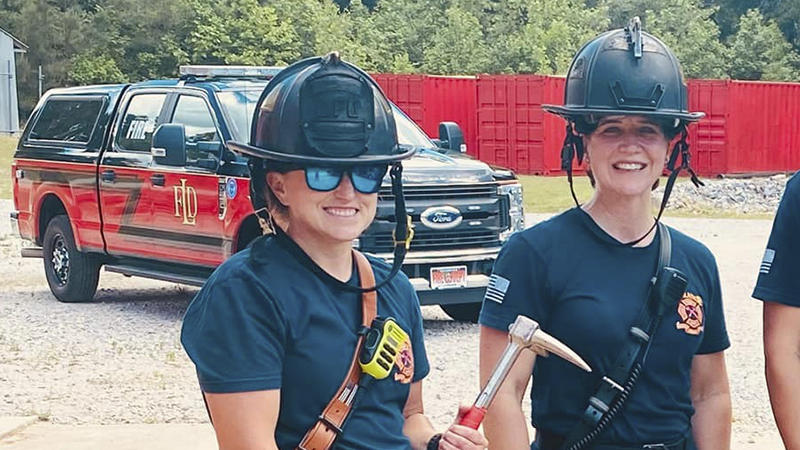 Only 11 minutes later, at 10:41 p.m., the LaGrange Fire Department had to deploy a search and rescue team for an elderly woman trapped in a house fire. Her life was in danger.

That night the LaGrange Fire Department’s station 5 engine crew consisted of Sgt. Michette Moon, FF Zack Domantay and FF Brandi Capes. Domantay was the driver and engineer while Moon and Capes were the two in charge of performing the search and rescue.

While the search and rescue transpired in and around the house, Erma Jean Tucker had to watch her house in flames while worrying about her mother, who was still inside.

“The two young ladies moved quickly and got in the house. They didn’t think about it, they just ran into the house,” Tucker said. “I told them I didn’t know what room she was in, and they told me ‘don’t worry ma’am we’re going to go and get her.’”

She said she’d just been doing training and was near the fire engine when the call went out, so they were able to jump into the truck quickly.

Capes said this was her first major operation under so much pressure. Capes graduated from the firefighter academy in March. With a life on the line, she said training kicked in and she did not hesitate to jump in the face of danger.

“I remember I had just put my boots on from training and then tones dropped, and we were immediately on the engine, getting ready to roll radio traffic,” Capes said. “And it [said] that somebody’s inside. And it hits you. It really does.”

Moon said Shift Commander Willie Bradfield told the crew that the woman was inside, on the right side of the house. Moon said when she went into the house with her thermal imaging camera, she immediately noticed a bedroom to the right. She sent Capes that way because neither knew exactly where the victim was.

“When I scanned that front room, I could see heat down the hallway. I see the fire was back in the back. That’s where I went. We’re technically supposed to search closer to the fire because obviously it’s deadlier closer,” Moon said. “So, we went down that hallway, and I could see through the [camera] because it was kind of smoky right there in front of the house. I saw a doorway and when I opened the door, there she was. She was just sitting right there.”

Capes said she heard Moon yell and went running that way to help out.

“I heard [Moon] holler and got down there to her, and then the fire was there.

“And the only thing you can think of was you’ve got to get her out … I just turned my back to the fire, trying to protect her as much as she can be protected, and then we got her out. It felt so much longer than just in and out like we were.”

Moon said it was “insane” that there wasn’t any smoke in that room.

“When I got her up, she had no idea the house was on fire,” Moon said.

By that time, everything was starting to catch fire. The kitchen was on fire, and the room they were in was right beside it.

“Technically, we were standing in the fire room, the kitchen cabinets, everything’s on fire,” Moon said. “I could see a backdoor that was open. So I was like, we’re going out of that door. So we stepped out of her room, into the kitchen and took a right, and we were outside. It didn’t feel that fast. I think if anything would have gone differently, I don’t know if we could have made it to her room because that fire was building and fire builds really fast.”

From the time of the call to the moment they extracted the woman was roughly six minutes. Within a couple of minutes of them delivering the woman to safety, the entire room she was trapped in was engulfed in flames.

Within a minute of rescuing the elderly lady, the two firefighters had to go back in to put out the fire. By the time they took the hose line inside, they could barely see from all the smoke and had to crawl on their hands and knees. While this was all going on inside the house, Domantay —  the engineer — was getting the hose connected and properly prepared for entry.

“A lot depends on Zack, too. He’s just as important in this because your driver has to get you there, and he had that line out quickly. We got her out. But then it starts making a difference of how much damage and stuff is going to happen to the home if we don’t get that line in time to get back inside,” Capes said. “He was spot on getting that line down to us just to get back inside and knock that fire out before it really took over the rest of the house.”

“It was less than five minutes after I called that they arrived. That’s really quick. That can kind of be the difference between them being able to save her and not,” Tucker said.

The firefighters took an additional hour to put the fire out and assess the damage that took place.

“I never thought about the risk, and I wondered that too, when you go in, when you have that experience for the first time outside of training,” Capes said. “It’s not like you’re fearless, but you’re not fearful.”