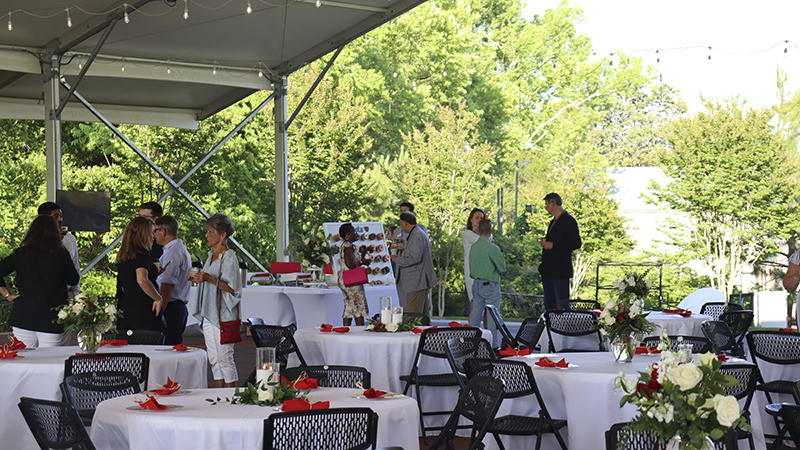 For the last year, LaGrange Mayor Jim Thornton has served as president of the Georgia Municipal Association, where he has served as a statewide leader and advocate for all 537 Georgia cities.

On Wednesday, Thursday and Friday, and with his time as president winding down, Thornton welcomed GMA members from cities all around the state to LaGrange, some of them visiting for the first time.

The purpose of the visit was for two meetings — one by GMA’s legislative policy council and a meeting of the 60-member GMA board.

However, inbetween all of the important business, Thornton got a chance to show off Wild Leap, Sweetland Amphitheatre, Hills and Dales, the Courtyard by Marriott and more of downtown LaGrange.

It was clear that the guests from out of town were impressed. The LDN talked to four mayors, who commented on the city’s walkability, cleanliness and the number of amenities LaGrange has downtown.

“That fountain was just, I mean, absolutely beautiful last night, to look at,” he said. “I mean, it’s amazing. Everything’s right here in walking distance.”

All of the mayors the LDN talked to described the importance of having the Courtyard by Marriott downtown. GMA members stayed at the Courtyard during their time in LaGrange.

Julie Smith, who is taking over as GMA president at the end of June when Thornton’s term ends, said she saw two things that she wants to take back to Tifton, where she serves as mayor. One is the concept of Wild Leap, the other is a downtown hotel.

“The hotel is key,” she said. “In talking to several different folks, one, Mayor Thornton and then some other mayoral colleagues that have hotels in their downtown area, that is a game changer. I referenced that walkability and the ability to really see the town — not that there’s any problem with hotels on the interstate and that kind of thing. But this is where the personality of the community is, and it really gives guests the opportunity to see that.”

Madison Mayor Fred Perriman was also impressed with the hotel.

“What I’m most impressed about is they have a hotel right downtown, which is convenient to walk in, like we walked to the meeting this morning, walked to the restaurant last night,” Perryman said.

For his part, Thornton said he always enjoys getting an opportunity to show off LaGrange.

He enjoyed hearing the kind words his colleagues shared during their visit.

Thornton joked that he almost purposely kept the visitors “captive” downtown, just so he could show off some of the areas they may not be as familiar with.

“There a lot of people who their perspective on LaGrange is the three interstate interchanges, and they haven’t ventured downtown,” Thornton said.

With that in mind, he ensured they had a place to stay at the courtyard and walked to Wild Leap for dinner Wednesday evening and hung out at Overlook Plaza.

Thornton said when he told everyone they were having dinner at Sweetland Amphitheatre on Thursday night, many thought he was referring to the plaza where they’d been the night before.

“No, we’ve got a bigger place just up the road,” he joked.

The meetings Thursday were held at Del’avant, and Thornton said he’d received so many questions about the history of the building that at one point he grabbed the microphone and explained how it’d been restored.

“I think people are impressed. People are complimenting the town,” Thornton said. “That’s great to hear … I’m not someone who tries to paint a false picture. I know there are plenty of issues and plenty of challenges. Every city has them. But we really do have some amazing assets.”

The LDN will publish a story detailing Thornton’s time as GMA president in an upcoming issue.