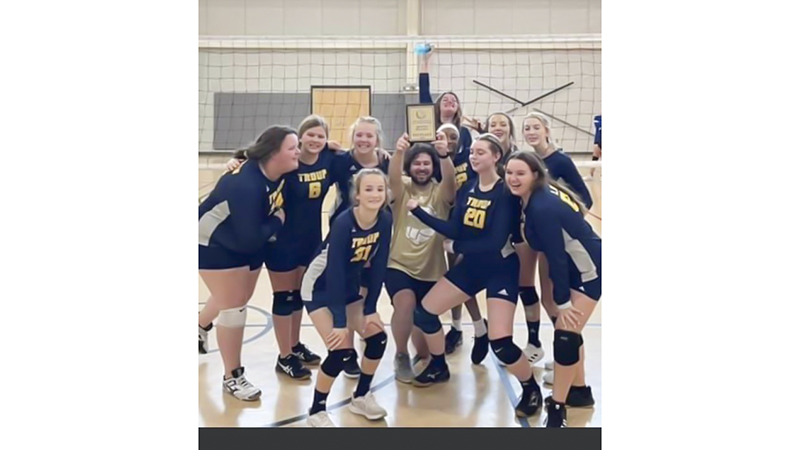 Hutch Blair is embarking on a new journey as Troup High School’s head volleyball coach. After serving as the freshman coach last season, Blair is stepping into even bigger shoes this year. Luckily, he is not on this journey alone as his long-time volleyball mentor is by his side as assistant coach.

“I was a manager for Jodi Dowden’s team’s years ago,” Blair said. “I’m glad she is my assistant coach now and has helped bring this program back up.”

A Troup alumni, Blair played football for the Tigers before a serious injury to his shoulder altered his athletic future forever. He decided to find another sport to play besides football and found his way to volleyball.

“This is something I’ve wanted to do for a long time, especially because I went to Troup, and I was involved with the volleyball program for two years as a manager,” Blair said.

At Mercer University Blair was a member of the club volleyball team. He initially arrived in Macon with aspirations to be a doctor, but his career path changed during his initial year at Mercer.

Blair did not envision himself getting this opportunity so soon, but once he got the offer it was an easy yes for him.

“I thought it would be a couple years as I learned more about the program,” Blair said. “It’s a really humbling moment for me.”

In just one year as a teacher and the freshman volleyball coach at Troup, Blair made a big impression. Now, he is looking forward to making an even bigger impression on his team as he leads an entire program for the first time in his young career.

Blair is not content with just coaching the girls he has. He wants the Troup volleyball to grow in its standing in the school and the community. With eyes on expanded sponsorships and bringing in new girls that might not have come out for the team previously, Blair has lofty goals for his program.

Troup High is home for Blair. It is where his volleyball journey had its humble beginnings, and it is now where he gets to teach an entire program about the sport he fell in love with in those very halls.

“This is something I’ve prayed for and hoped for a very long time,” Blair said. “All these opportunities came so quickly, but it’s really a blessing.”