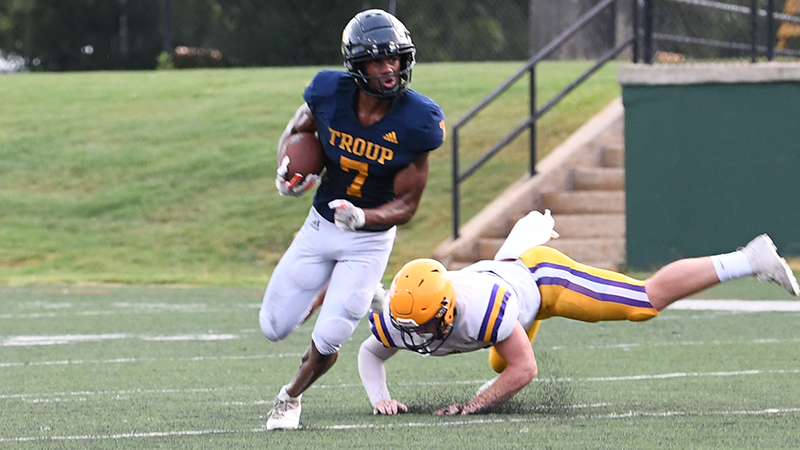 Four years ago Troup was one game away from playing for the first state championship in program history. The Tigers are still trying to capture the high of that 2020 season as they have earned a playoff spot in the last three seasons, but have failed to win a playoff game during that span despite losing by a single score the last two seasons.

The Tigers finished last season with a record of 8-3 as they finished second in region 2-AAAA. This season brings an even tougher region as the Tigers transition to a new region with teams centered around Fayette County.  LaGrange will be the only familiar foe in the region. Including Troup, seven of the eighth teams in the Tigers new region made the playoffs in their respective classifications in 2021. The Tigers come into the season riding a streak of six consecutive seasons in a row making the playoffs, but face a difficult path to make it seven in a row.

“There’s going to be two or three really good teams that don’t even make the playoffs,” head coach Tanner Glisson said. “ It could be that us vs. LaGrange last game of the season is for a playoff spot.”

One of the major goals for the Tigers this season is to capture their first region championship since 1987. Troup was one win away from capturing the championship last season, but will be in for another difficult quest for a reign title this year.

“The goal every year is to win championships and to be there in the conversation,” Glisson said.

While the goal is to win titles, the focus right now is on their preparation week to week.

“It’s really too early to put expectations on the season,” Glisson said. “You just don’t know what is going to happen between now and December.”

The first step starts with a brutal non-region schedule to open the season. The Tigers play Harris County, Callaway, and Hardaway in the first three games of the season and all three were in the playoffs last year in their respective classifications. Glisson is looking to win every single non-region game, but is also focused on getting his team healthy for their onslaught of region opponents.

“I think I learned my lesson after (Teao) Todd got hurt last year,” Glisson said. “Yes we want to beat Callaway and Harris County, but we have to realize that there are bigger fish to fry.”

This year’s team is junior heavy with the entire offensive line being juniors as well as starting quarterback Teao Todd. The Tigers will also have some senior leadership provided by Trey Blackmon who will find himself at running back and safety and is one of the team’s major leaders on the field.

It will be a long and arduous season for the Tigers as they set to do battle with nine of their ten opponents coming off seasons with winning records. AAAA is a bloodbath of extremely high quality teams. This means that teams cannot look ahead and will have to focus in every week as a slip up could prove extremely costly in the race for a playoff position.

“With the way things are going right now in AAAA we are going to have to take it week by week,” Glisson said. “We don’t know how the dominoes are going to fall so right now our no. 1 goal is to make it into the playoffs.”

Taeo Todd returns for his third year as starting quarterback for the Tigers. Todd is a dual threat quarterback who can attack defenses with his arm and his leg.

Todd missed some time with injury last season after picking up a knock in the Tigers game versus Callaway.

Todd split time last season with Tyson Duncan last season but with Duncan graduating in May, Todd will have full reins on the offense this season. Todd is a finesse runner with a strong arm who gives the Tigers loads of different attack angles on offense.

“His accuracy and throwing the football has improved,” Glisson said. “He’s made some strides in his ability to throw a catchable ball.”

If the Tigers ran into a pinch, Noah Dixon, a junior, would likely step in and see game action. Dixon has taken a few snaps at quarterback in the offseason despite being the team’s no. 1 safety.

TJ Mitchell and Javari Fannin figure to be the lead two running backs again this year after carrying the load for the Tigers last year from the running back position. Both players are rising Juniors and were the Tigers two leading rushers last season as sophomores. Trey Blackmon, who mostly played as a member of the secondary on defense in the past, figures to get some action at running back this season.

“We moved Trey Blackmon over from defense to running back, and he has a different level of speed and a big motor,” Glisson said. “He’s in the low 4.5 range which is good.”

Fannin is the power back, Blackmon is the speed back while Mitchell is a combination of both as all three figure to get into the game plan depending on what the situation calls for.

The Tigers are going to have to replace Dwartney “Buddy” Wortham who departed for the University of Central Florida and leaves a big vacant spot at the team’s no. 1 wide receiver position. Qua Moss and CJ Sands will vie for the spot but will both likely see a lot of game time as the two most experienced wide receivers on the roster. Both players are going into the senior seasons.

“You could also see Ashton Williams out there at wide receiver,” Glisson said. “He has great potential.”

Malikih Poythress, a junior, will figure into the outside wide receiver equation with Sands while Moss will find himself lined up in the slot. Pythress transferred in from Callaway last season and had to sit out a year.

When not lined up at running back, Blackmon will play some slot wide receiver as well, which he has played in year’s past.

Omar Cortez, a sophomore, will likely see more game time this season and will be used more as a receiving tight end than a blocking tight end. Dexter Davis can split time at tight end and fullback and will be used more for blocking than receiving. Ben Taylor, a transfer, is 6’4, 240 lbs and will be a junior this season. Taylor is the most well-rounded tight end, and Glisson is intrigued by his size and athleticism. Jayce Heyward, a sophomore, could see some time at the position as well.

The Tigers will be experiencing some turnover on the offensive line from last season.

“Coming from the last game of last season, I don’t think we’ll be returning any starters on the offensive line,” Glisson said.

Isaiah Hall, a junior, will get the start at left tackle, the same position where he started at the beginning of last season before a devastating season-ending injury in game two of his sophomore year.

Charles Davis is making the switch over from defense and looks to get the start at left guard for the Tigers. Davis is also a junior.

Steven Davis, another junior, is slotted into the starting center role this season. Davis was the team’s starting JV center before making the transition to varsity starter this offseason.

“He’s our captain up front, our leader up front,” Glisson said. “He’s really smart and has all the intangibles.”

Jeremy Patrick, a junior, will likely get the nod as the starting right guard. Patrick did not start last season but got some valuable experience as a substitute in some games and has the second most playing experience on the offensive line behind Hall.

Braden Smith is the likely starting right tackle. Smith is also a junior but had to sit out varsity  last year after transferring from Manchester High School but did get some action on JV.

Jatorian Blackmon and Bennett Kirk, both sophomores, will be the Tigers top two substitutes along the offensive line.

The Tigers play with a four man defensive line with two defensive ends, a defensive tackle and a nose guard. The line is anchored by Jaqualin “Qua” Birdsong, a four star defensive end.

Jacob Bailey, a senior, will play the opposite defensive end spot and offers another formidable pass rusher on the outside for the Tigers.

Ben Taylor, who also sees time at tight end, will be the teams starting defensive tackle. Charles Davis will see time up front on the defense as well with Amarius Purdue, a sophmore, and Davis battling it for the final starting spot on the defensive line with both likely to see ample playing time. Jatorian Blackmon will figure into the mix as well at the nose guard position. Glisson plans to be at least six men deep at the defensive line so he can rotate players in and out.

The Tigers middle linebacker will be Javari Fannin after losing inside linebackers Tyson Duncan and Demonta Reed who started on last year’s team. TJ Mitchell and Tyler Leslie will be the starting outside linebackers for the Troup. Mitchell and Leslie are versatile players that will be used in coverage, as pass rushers, and run stoppers.

“All three guys have started in some form or fashion before and they are all juniors,” Glisson said.

Elijah Mathis will be the Tigers primary substitute at the linebacker position.

“Qua Moss and CJ Sands are going to be our two lock down corners,” Glisson said.

Moss and Sands come with a ton of experience and Glisson feels comfortable leaving both guys on an island in coverage at times. Ashton Williams will be spelling those two guys throughout the season.

Noah Dixon and Trey Blackmon will be the team’s starting safeties.

Three of the staters in the secondary – Sands, Blackmon, and Moss – are seniors.  Tyreon Smith and Jayland Reed, two sophomores, will provide depth at the cornerback position.

Chris Moore, a senior, will be handling kickoffs, field goals and punting duties for the Tigers this season for the first time.

“We did actually recruit him,” Glisson said. “We saw him in the gym and on the soccer field and we begged him to come play.”

Ben Taylor and Jeremy Patrick are in a roster battle for the starting long snapper role.