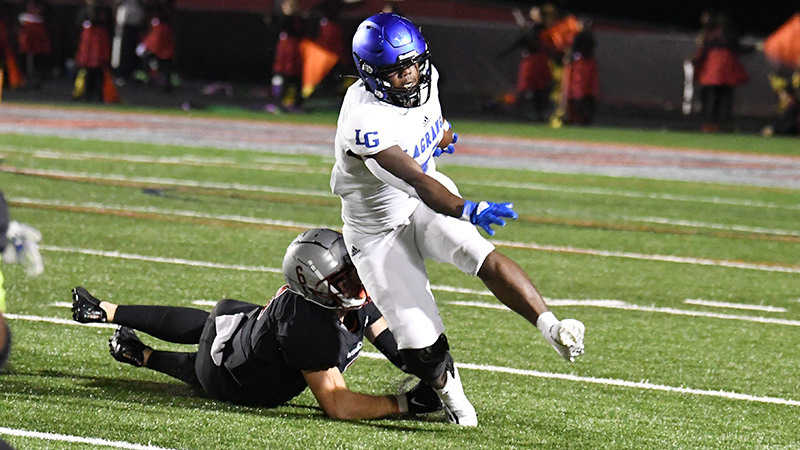 After two straight one-score losses to teams in the top 10 of AAAA, LaGrange will be looking to get its first region win of the season when the Grangers take on Riverdale in Callaway Stadium on Thursday night.

“It’s the third big game in a row, we are playing another good opponent,” LaGrange coach Matt Napier said. “We need to be able to come out and play well early.”

The Grangers last game out on the road to Whitewater was truly a tale of two halves. The Grangers were outscored 22-7 in the first, but rallied and outscored the Wildcats 14-7 in the second half and had a chance late, but a hail mary fell incomplete to the turf.

“We came out and didn’t play well early,” Napier said. “Our kids settled in during the second half. The guys never showed any kind of quit or any kind of give up. They needed us to compete all the way through four quarters.”

There is still a ton of football to be played, but the Grangers currently sit outside the playoff positions in seventh place and will be looking for a big response on Thursday night to kick their region play into gear.

Despite throwing his first interception of the season, Jaylan Brown responded by having a monster game, especially in the second half last week against Whitewater. Brown was 17-for-24 for 319 yards and a passing touchdown while also adding another on the ground. As one of the primary leaders of this team, Brown has thrown for 814 yards and seven touchdowns through the air. He also had 120 rushing yards and six rushing touchdowns.

The wide receiver room helped Brown out against Whitewater by consistently getting separation. Leading receiver Magic Johnson had eight catches for 90 yards. It was Jaylon Jordan who used his big body to haul in three receptions for 122 yards in his best performance of the season.

“He’s kind of the opposite of Magic in the sense that he’s a big long guy,” Napier said. “He can go up and make a play on the ball in the air. He brings that big frame that can catch the ball in traffic. It’s a good combination between the two.”

The Granger running game did not quite have the same burst with Malachi Fannin-Render sidelined indefinitely. AJ Tucker stepped into the roll after being the starter last season and showed why he was a thousand yard rusher a season ago. He had his best game of the season by toting the rock 14 times for 64 yards and a touchdown that gave the Grangers some life late in the fourth quarter.

Riverdale will run a completely different offense to the one the Grangers faced the last couple of weeks. Starr’s Mill and Whitewater run variations of the wing T that deploys a lot of misdirection with the quarterback operating under center. The Raiders will be operating almost exclusively from the shotgun formation.

“They are mostly in the gun but run some similar type of plays,” Napier said. “They attack all levels of the defense really well. They have a scheme that allows them to throw and run the ball well.”

Riverdale is currently third in the region with a record of 2-1. The Raiders were 9-1-1 overall last year before exiting the AAAA state playoffs in the second round in a 7-0 loss to Dougherty.

“With our region, you have to focus on one game at a time,” Napier said. “Our guys have been prepared and didn’t flinch. We lost to two top 10 teams in a row. You could put your head down and feel sorry for yourself, but the guys haven’t done that.”

LaGrange is 3-2 overall and 0-2 in the region. The game at Callaway Stadium on Thursday will kickoff at 8 p.m.