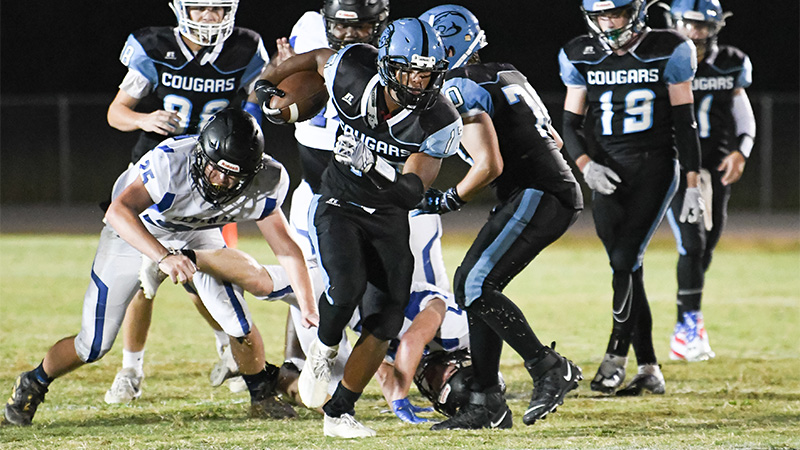 Lafayette Christian needs a response after starting 0-1 in region play with its 18-12 loss to Horizon last week. The Cougars are taking on Fideles in a road game on Friday.

“Their quarterback is pretty talented,” Cougar coach Jared Pike said. “He’s a runner and their most athletic guy. They will do a lot of design draws and sweeps. We are going to have to contain him.”

The Cougars took a defeat last week, but had a chance late. The game tying catch hit a Cougars fingertips with under a minute to go in the game.

The Cougars offense was hamstrung by the fact that starting quarterback Andrew Hough caught the flu last week and the team did not know they were going to be without him until Thursday. This left the Cougars especially shorthanded as their backup quarterback was out as well. Do-it-all player Alex Tusing filled in at quarterback and was sorely missed elsewhere on the field.

While Hough is slated to return this week, Tusing broke his collarbone in Monday’s practice and will miss the remainder of his senior season.

“Yesterday Alex Tusing broke his collarbone and is out for the season,” Pike said. “It’s frustrating for the coaches and for the players. They want to play with the guys they practice week and play with all the guys together. It’s hard to get in a rhythm when your quarterback gets the flu one week and then you have to change the whole offensive scheme because a guys broke his collarbone the next week.”

The offense will have to rely even more on Ephraim Snyder, who has been the bell cow so far this season for the Cougars. While he did not have his best game of the season against Horizon, he was still able to get in the end zone.

“Ephriam is going to have to play more defense now,” Pike said.

Braden Firth – who is still nursing a knee injury – also figures to get even more opportunities going forward. Firth got the other touchdown last week on a reception from Tusing.

A relatively inexperienced player – Chaz Clark – will also be looked at to take on a bigger role.

“He checks all the boxes for size and speed, but he has only been playing football for one year,” Pike said. “He is still developing some football IQ. He’s becoming more knowledgeable of the game. He’s coming along, and I hope he can step into Alex’s role.”

The defense will have to be even more of a force going forward. The Cougars defense put on their most impressive display against Horizon last Friday. Cal Evert led the way as he registered five sacks in the game. Equally as impressive was Cody Bastini who joined the team a couple of weeks ago and reeled in an interception against Horizon. More players will have to step up on both sides of the ball as that is how 8-man football can decimate a team when injuries pile up.

Lafayett Christian is 3-2 overall and 0-1 in the region at the halfway mark of the season. The Cougars have to win on Friday to keep their hopes of a playoff berth alive.

“We have to show up and start playing football before the third quarter,” Pike said. “We have to step off the bus ready to play. We played for about five minutes in that Horizon and scored 12 points and dropped the game winning touchdown in that span. We are not here for a bus ride and a pizza party at the end, we are trying to win a football game.”