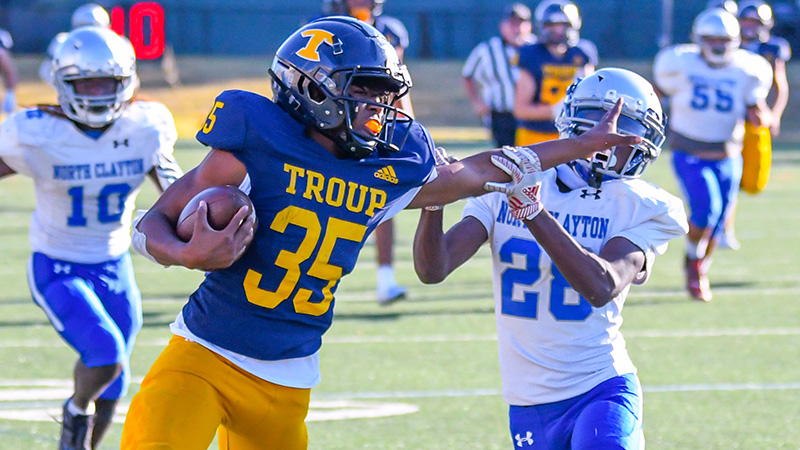 Troup cruised to a 63-0 victory over North Clayton on Thursday. The Tigers were up 36-0 after the first quarter and a running clock in the second quarter and second half expedited the game.

“There was some really nice weather that made for a fun afternoon of football,” Troup coach Tanner Glisson said.

The Tigers jumped on North Clayton with a 61-yard touchdown pass from Taeo Todd to Qua Moss, and it only got better for Troup from there. The Eagles went nowhere on their first possession of the game that ended with a Qua Birdsong blocked punt for a safety.

Moss got on the scoresheet once again with a 24-yard touchdown run on the Tigers next possession.

The Tigers stars did not stay in the game long as Todd only played four drives in the game before Logan Sinkfield came in at quarterback.

“We were able to clear the bench and get everybody in the game, which is a big thing,” Glisson said. “6-0 is about as good as you can get.”

Todd finished the game 2-for-2 for 66 yards and a touchdown.

Tyreon Smith punched in another Tiger touchdown from 18 yards out on the first play from scrimmage after a sack and forced fumble by Qua Birdsong that was recovered by Charles Davis, who got a two-point conversion on the previous scoring drive by the Tigers.

Birdsong got another sack on the following drive that saw the Eagles turn the ball over on a fumble once again.

Sophomores Cam Cameron and Turtle Vines came in and gave the Tigers some extra burst out of the backfield.

“I love that they give us that everyday in practice,” Glisson said. “You can tell by the sidelines’ reaction that everybody was excited to see them in the game. It takes a lot of people to have a good football team and with our scout team and younger guys, we have that.”

Cameron scored on a short TD run before Vines got one of his own with 22 seconds left to go in the first quarter.

Cameron showed his burst again when he rattled off an 84-yard rush that set up a short touchdown run by Sinkfield in the early part of the second quarter. Cameron tallied seven carries for 182 yards and two touchdowns in what was an extremely impressive performance from the sophomore running back.

The Tigers took a 44-0 lead into the break and never looked back. The running clock meant that the second half was gone in a breeze, but not before the Tigers added to their tally.

Dexter Davis recovered a fumble out of the break to set the Tigers up in good field position, which they capitalized on when Ashton Williams scored a touchdown to give the Tigers 50 points.

Special teams proved to be a pivotal part of the game as the Tigers once again blocked a punt, but this time they were able to return it for six points. It was Amar Cortes who got the block and recovery as he flashed his tremendous potential.

“Cortes showed his athleticism,” Glisson said. “We like a lot about him as a sophomore, and we are excited about what we saw from him.”

Troup got one more score when Cameron reached the end zone for the second time in the game to give the Tigers a whopping 63-0 lead that they held until the end of the contest.

“We know we are the better team and came out from the get go and left no doubt,” Glisson said. “We didn’t let them stick around. We took care of business.”

Troup moves to 6-0 overall and 3-0 in region play. The Tigers will take on region foe Riverdale on the road on Oct. 7.

“When you come out of games with no injuries that is huge and we didn’t have any tonight,” Glisson said.