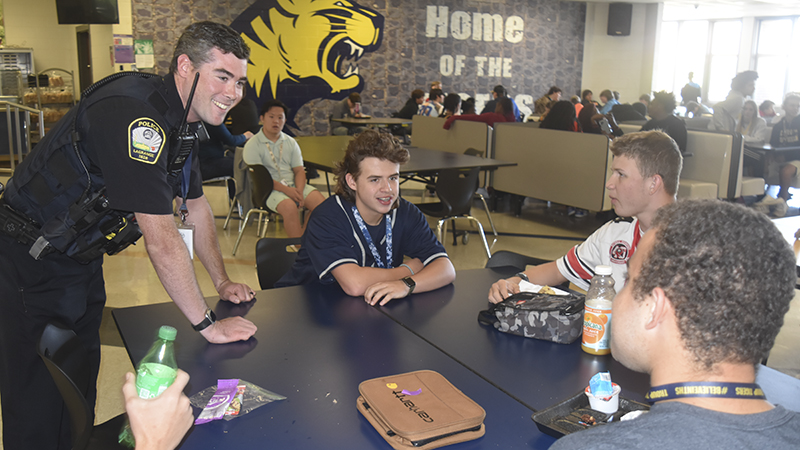 On Wednesday, a potentially dangerous incident was averted when Officer Ryan Cadenhead, a student resource officer (SRO) at Troup High School, arrested a student who didn’t belong on campus.

The student, a 15-year-old who attends LaGrange High, had a loaded gun in his possession. The investigation continues into why he was on the Troup High campus, but regardless, Cadenhead in the very least removed a gun off of school grounds, but his actions also might’ve prevented a much more serious situation.

“I think that unfortunate events like the one we had happen a few days ago should be the solidification for anybody that may feel that SROs in the schools are a waste of resources,” said THS Principal Niki Watts. “If they’re needed one time, it’s worth them being here.”

Watts said Cadenhead was the hero of the day.

“His presence was the reason why the incident was kept at the minimum level that it was,” Watts said.

Cadenhead, who was a 2012 graduate of Troup High, has been an officer for the LPD for six years and has been the SRO for THS for three years.

When Officer Ricky Parks retired after 18 years as Troup’s SRO, Cadenhead applied for the job.

“I graduated from there, I love dealing with kids, I love doing that kind of stuff,” Cadenhead said. “I applied for it, got it and went to SRO School, and now I’m here.”

Watts said Cadenhead should expect to be there for a long time.

“If I have any say so, he’s going to be here forever, or at least as long as I’m here,” Watts said.

Cadenhead said being around the students and getting to know them helps when dealing with situations that may arise, whether they are at home or at school.

“I’ve been other campuses and stuff and each group of students at campuses act different and interact differently with the adults,” he said. “I’m in the hallways, and I keep an eye out for how students normally act and how they may act differently if something was wrong.”

“I feel like our students see Officer Cadenhead as an extension of our staff,” Watts said. “Obviously, they respect and recognize him as a law enforcement officer, but he’s also their SRO. They see him as Troup High’s police officer as well.”

Cadenhead said he remains vigilant at all times and makes sure he’s visible so students can look to him as a trustworthy resource.

Watts said that she appreciates that Cadenhead takes initiative and goes above and beyond to provide safety for students and staff.

“A lot of people think SROs just sit around waiting on something to happen,” Cadenhead said.  “Speaking for myself, I don’t do that. I have duties specified for THS. In the morning, I monitor the parking lots, every class change I’m in the hallway, after school monitoring the lunchroom and events kids come back for.”

The student arrested said he was on the THS campus to retrieve a Chromebook. LPD Capt. Dale Strickland said the student told police he found the gun the day prior, though the LPD is investigating that claim.

“I’m very proud of our administrators, of our staff member that recognized something was awry and Officer Cadenhead’s efficiency and professionalism in dealing with the situation,” Watts said. “It could have been much worse, but we were able to contain it, identify the student and contain it quickly.”