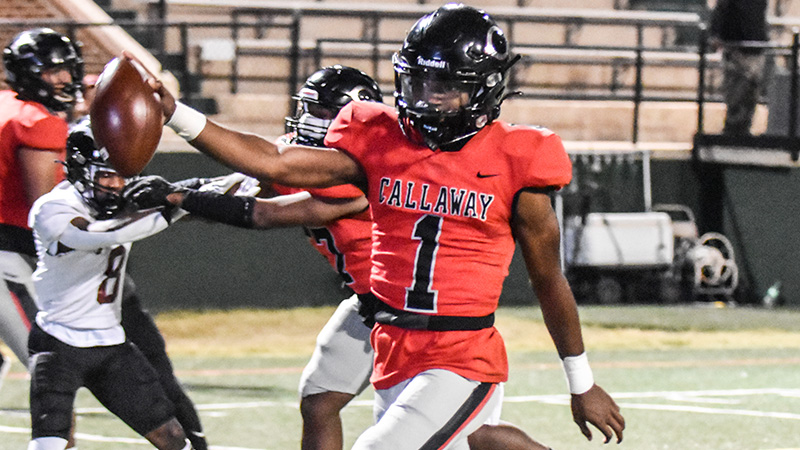 It was a commanding performance from the Callaway Cavaliers on homecoming Friday night as they trounced Towers 57-6.

“I like our preparation all week,” Callaway coach Pete Wiggins said. “I think we had the best practices of the year and our guys’ energy has been high. The guys are excited about where we are at.”

Excitement is building to a fever pitch as the Cavaliers have responded to three straight losses to open the season by winning their last four games.

Junior quarterback DeShun Coleman was the star of the show offensively. Coleman scored his first touchdown on an 8-yard keeper to make it 14-0 Callaway before throwing for a touchdown and rushing for a 12-yard touchdown later in the first half to make it three touchdowns on the day.

“I think I played well, but I want to be a lot better next week,” Coleman said. “I think I’m getting better in the run game. I feel like I’ve been getting better this season.”

Wiggins talked earlier in the week about Coleman growing in confidence, and it was on full display Friday. He threw a dime to Exavious Reed to make it 21-0 Cavaliers late in the first quarter.
“We are tight on and off the field,” Coleman said. “He gets open. He’s big, physical and has big hands and can catch. As a quarterback, I like him.”

The Cavaliers cruised to victory and jumped on the Titans two minutes intp the first quarter when Whitfield punched the ball in from three yards out.

Callaway took a commanding 21-0 lead into the second quarter and quickly made it 23-0 on a safety from Davion Johnson, who sacked the opposing quarterback in the endzone. It was just a part of a special performance by the defense on homecoming night.

“Anytime you play physical and run to the ball like we did tonight good things will happen,” Wiggins said.

Jordan King got in on the action with a 14-yard touchdown run and Coleman scored his second rushing touchdown of the game less than two minutes later to make it 37-0. A Zae Hart touchdown run just before half sent the Cavaliers to the break up 44-0.

The second half saw the Cavaliers score two touchdowns — one on a 20-yard touchdown run from King and the other on a quarterback keeper from Blake Herrington.

Herrington and Hart are just two of the young players who stepped on Friday night.

“Really proud of Xae Anderson,” Wiggins said. “He started on our defense as a freshman and done a hell of a job throughout the season. That’s a lot of weight on a young man’s shoulders and he’s been able to carry it.”

Getting young players some reps while getting out of the game healthy was the name of the game for the Cavaliers as the second half had a running clock.

Callaway improves to 4-3 overall and a perfect 3-0 in region play. The Cavaliers will be back on the gridiron next Friday at Callaway Stadium for a showdown with top-10 ranked Eagle’s Landing. The game will likely decide the region title.

“We had a good week of practice this week, and it paid off,” Coleman said. “Now, we have to build on it next week.”